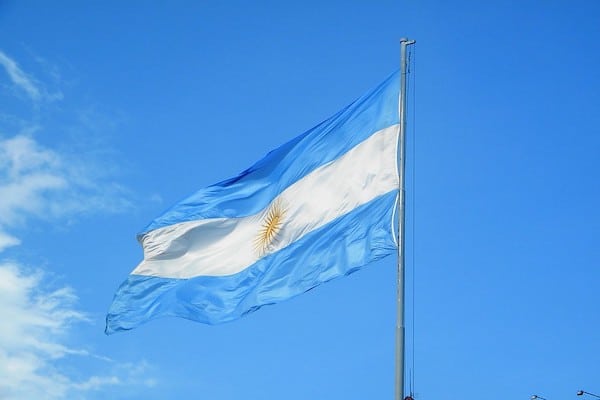 In the past years, there has been a very much welcomed flourishing of Marxist Feminist analyses. In a recent article, we contribute to the ongoing discussion by elaborating on Marx’s concept of the value of labor power to conceptualize the massive incorporation of women into the labor market and its consequences in terms of wages in Argentina since the mid-seventies.

The literature on the value of labor power has typically focused on the reproduction of labor power, which consists of the consumption of the means of subsistence required to replenish (paid) workers’ expenditure of brains, nerves, and muscles so they can put in motion the labor capacity required by the production process the next workday. Marxist Feminists have highlighted that (paid) workers also need to be cared for, their food cooked, and that most of the many additional essential domestic tasks are typically done by women without payment.

However, the value of labor power also involves the production of labor power sellers to satisfy the demands imposed by the permanent valorization of capital. Analytically, this requires two things: the biological reproduction of the species (having kids, feeding them, caring for them, etc) and the transformation of those individuals into (paid) workers for capital through the development of certain productive attributes (education, development of specific personal characteristics and skills, etc).

Marx hinted that the “maintenance and reproduction of the working class remains a necessary condition for the reproduction of capital. But the capitalist may safely leave this to the worker’s drives for self-preservation and of propagation.” Marxist Feminists argue that the place where workers consumed and took care of the production of future generations guided by their own “drives for self-preservation and of propagation” was the household. Specifically, the nuclear family based on a sexual division of labor tied together through relations of personal dependence was constituted as the historically specific area for consumption, biological reproduction, and formation of productive attributes.

Because of that, the reproduction of unpaid domestic and care working partners (typically women in their historically specific roles as wives and mothers) and that of children as future members of the working class are essential for both the reproduction and production of labor power and thus, of capital. Consequently, the means of subsistence that they need to consume are also part of the determination of the value of labor power. Therefore, the expression of the value of labor power (that is, the real wage) of that family’s labor power sellers (mostly adult men) includes an amount destined to purchase the commodities that unpaid working partners and children need to reproduce themselves.

In other words, the value of labor power is not determined at the individual, but at the family level. This implies that the domestic and care work of unpaid workers is not a “free gift” for capital insofar as it is indirectly included in the wages of that family’s labor power sellers. If it were appropriated for free, it would not be possible for unpaid workers to reproduce themselves unless capital simultaneously and by an equal amount pays workers in excess of their needs so they can afford to sustain other members of the household. However, this would be equivalent to arguing that what capital appropriates for free from unpaid workers, it “gives for free” to paid workers, but this explanation is inconsistent with sustaining that capital’s driving force is the maximization of profit. This is not to deny that the indirect payment of their work, which arises from its immediately social character, carries deeply problematic consequences for women, restricting their autonomy by making them dependent on the wages of their partners.

While the value of labor power is determined at a family level, its form of expression (wages) is paid to individuals, and it suffered a profound transformation since the mid-sixties when a New International Division of Labor came about. This provided the general material basis upon which women massively became labor power sellers on a worldwide scale. From that moment on, the working family’s value of labor power ceased to be almost exclusively embodied in the wage of the adult male and began to express itself, albeit unevenly, amongst the wages of more than one family member.

Because of this, looking at individual wages as expressions of the working family’s reproduction conditions can be misleading. Consequently, we construct a household’s income by adding up the wages of all the members and we look at its gendered composition and evolution compared to the individual income.

As shown in Graph 1, in Argentina the increase in female employment led to an expansion in female participation in the household income, which grew from 27 percent in 1974 to 40 percent in 2018. 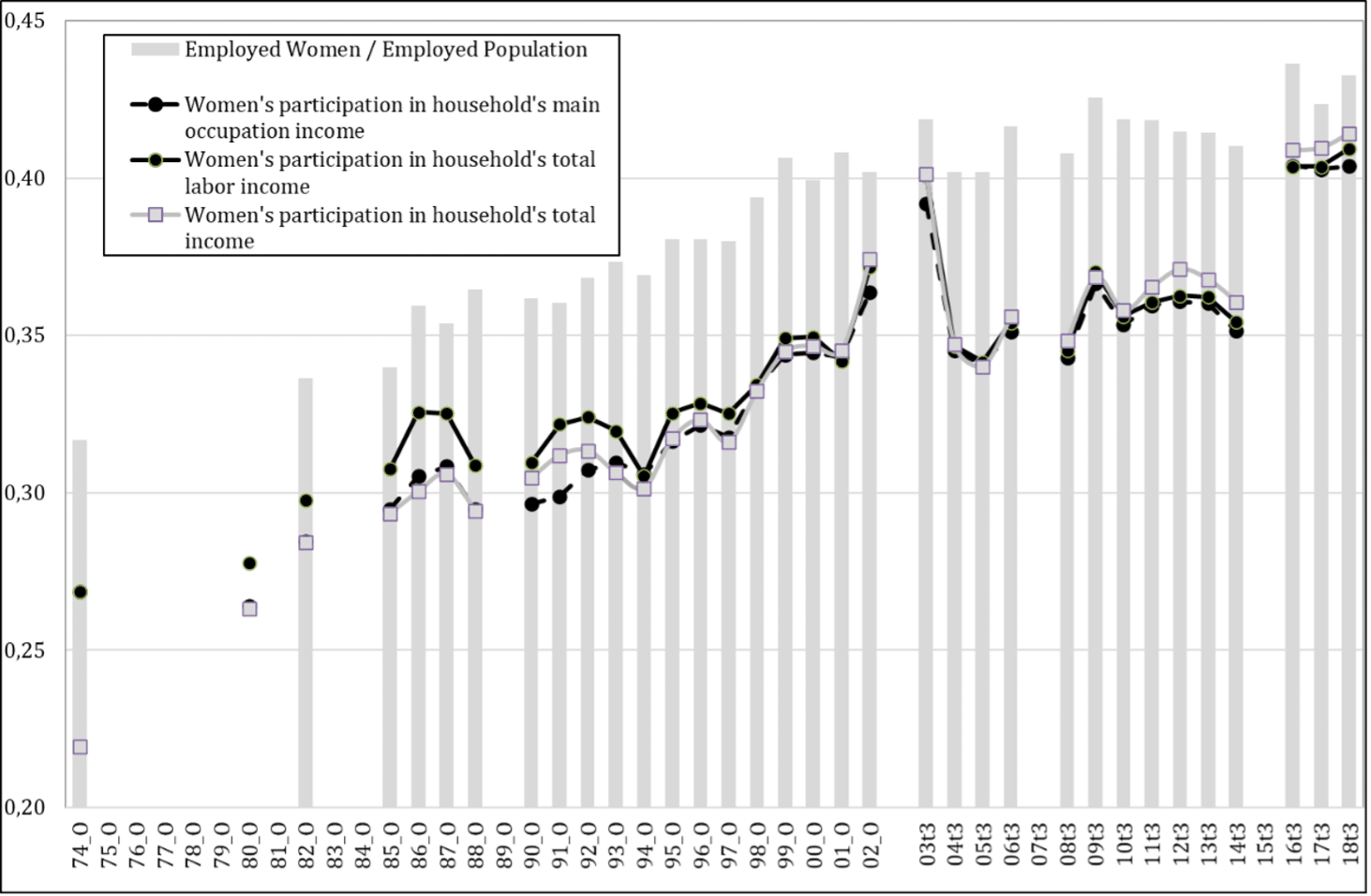 Graph 1. Female participation in the employed population. Female income participation in household income with homes that have at least one wage earner, a self-employed person, or an owner, by type of income (main occupation, total labor income, and total income), Greater Buenos Aires, 1974–2018 (in percentages).

As can be seen in Graph 2, since the mid-70s there is a growing bridge between the individual and the family wage, reflecting the incorporation of women into the labor market. The evolution of the purchasing power of the household’s income reached a maximum of 11 percentage points higher than that of an individual income in 2012. Similarly, there is a growth in the gap in levels between household and individual income, increasing from 46 percent in 1974 to 71 percent in 2011. After 2014, the series becomes incomparable. 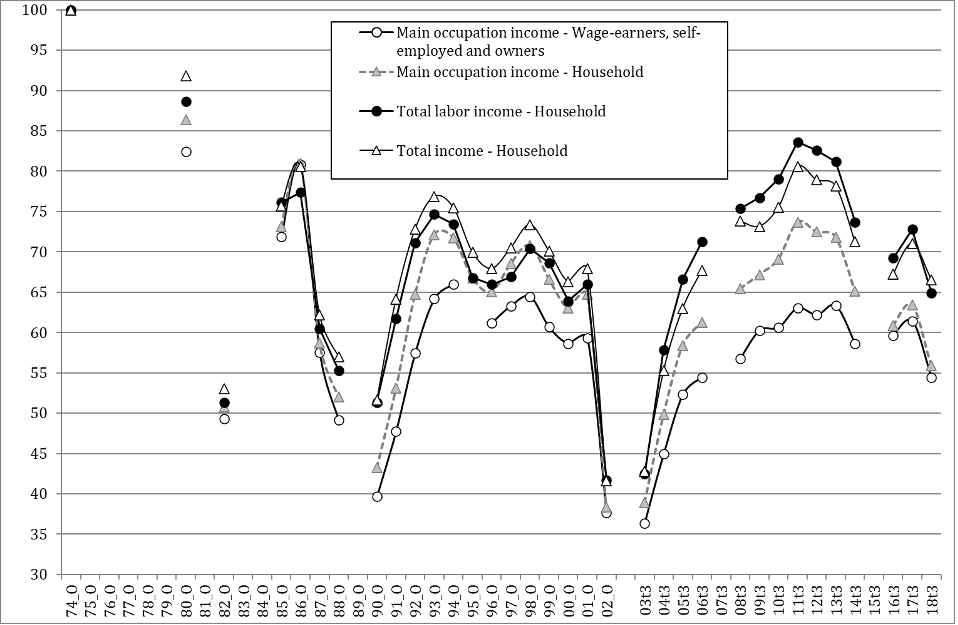 To conclude, our results provide evidence of the process of the slow and gradual dissolution of the classical sexual division of labor that resulted in an increased expression of the value of labor power (that has a family level determination) in the wages of more than one household member.

Nicolás Aguila is a Doctoral Research Assistant at Universität Witten/Herdecke.