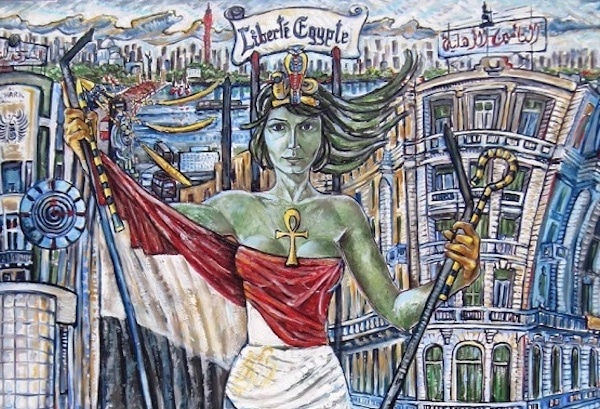 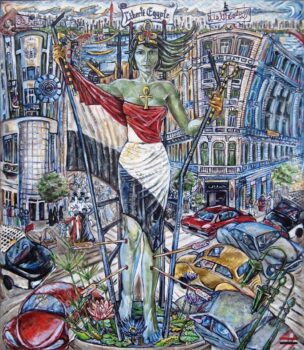 For over a decade, Alaa Abd el-Fattah has been in and out of Egypt’s prisons, never free of the harassment of the military state apparatus. In 2011, during the high point of the revolution, Alaa emerged as an important voice of his generation and since then has been a steady moral compass despite his country’s attempts to suffocate his voice. On 25 January 2014, to commemorate the third anniversary of the overthrow of Hosni Mubarak’s government, Alaa and the poet Ahmed Douma wrote a moving epistle from their dungeon in Tora Prison, Cairo. This prison, which houses Alaa and other political prisoners, is not far from the beautiful Nile and–depending on Cairo’s traffic–not too far from the Garden City office of Mada Masr, where the epistle was published. In cities such as Cairo, the prisons where political prisoners are tortured are often located in quite ordinary neighbourhoods.

‘Who said we were unequalled? Or that we’re an enchanted generation?’ wrote Douma and Alaa, reflecting on the idea that the 2011 uprising was somehow exceptional. ‘We’re human’, they wrote, ‘but in the dark we wish for light’. The Arabic Network for Human Rights Information estimates that there have been 65,000 political prisoners in Egypt since the 2013 takeover of the state by President Abdel Fattah al-Sisi. Alaa is being held on a number of charges, but most of them stem from a frivolous and malicious accusation that he organised a protest that lasted for about fifteen minutes; for those fifteen minutes he has been imprisoned for much of the past decade.

How many sensitive people across the world are being held in prisons, charged with ridiculous indictments? The reports that swim across the internet–many of them from human rights groups based in the West–are not completely credible since they ignore or downplay the record of Western governments and pro-Western regimes. The United States government, for example, denies that it holds any political prisoners despite the fact that there are international campaigns to free people such as Alvaro Luna Hernandez (La Raza), the Holy Land Five, Leonard Peltier (American Indian Movement), Marius Manson (Earth Liberation Front), Mumia Abu-Jamal (MOVE), and Mutulu Shakur (Black Liberation Army). ‘These people are held without just cause, often because they peacefully exercised their human rights–like freedom of expression–or defended the rights of others. They may have organised an opposition party. Reported on abuse and corruption. Taken part in a peaceful protest’. These are the words of U.S. Secretary of State Antony Blinken from 7 December 2021. In a stroke of irony, his words apply to dissidents inside the United States as well as to dissidents from U.S. allies such as Saudi Arabia and Colombia. 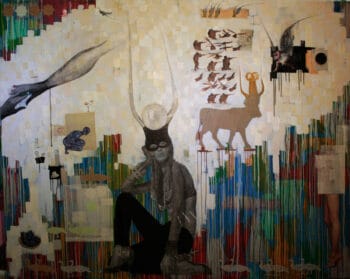 On 20 December 2021, less than two weeks after Blinken made these remarks, Egypt’s State Security Court sentenced Alaa to another five years in prison along with Mohamed al-Baqer and Mohamed ‘Oxygen’ Ibrahim, who were sentenced to four years each. At that time, U.S. State Department spokesperson Ned Price said in his weekly remarks that the U.S. was ‘disappointed’ by these verdicts. A few weeks later, Ahmed Hafez, spokesperson for the Egyptian Foreign Ministry responded by saying, ‘It is inappropriate to comment or touch on Egyptian court rulings’. That was the end of that. Each year, the U.S. government provides Egypt with $1.4 billion in aid, most of it for the military; each year, the U.S. makes a big fuss of withholding a little more than $100 million of this money on the grounds of defending human rights, although the money is later released to Egypt on the basis of ‘national security’. There is a lot of huff and puff about ‘human rights’, but no real concern for the throttling of democratic processes within the country. ‘In the dark’, Douma and Alaa write, ‘we wish for light’. But in the dark, arms deals and ‘national security’ set aside considerations of democracy and human rights.

The Arab Spring–whose centre was the stone slab in Tahrir Square–lies in ruins. Tunisia, where the entire process began, struggles with a government that has suspended its democratic institutions in the hope of tackling the social crisis that predates the COVID-19 pandemic but has been exacerbated by it. On 14 January, the anniversary of the overthrow of President Zine el-Abidine Ben Ali in 2011, the Workers’ Party of Tunisia led a march from Tunis’ Republic Square to the Central Bank with the slogan ‘No populism, no fundamentalism, no reactionaries ’. They opposed the old regime of Ben Ali, the Islamists, and now the ‘populist’ presidency of Kais Saied. The Workers’ Party made the point that the economic crisis, which was exacerbated by the International Monetary Fund and that provoked the 2011 revolution, remains unaddressed. The United Nations has also expressed its concern about the use of internal security forces in Tunisia to crack down on basic political rights. 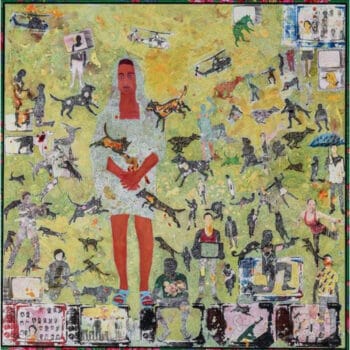 In Morocco, the situation is dire. The political regime centred around King Mohamed VI is called the Makhzen (a term that means ‘warehouse’, referring to the place where the king’s subordinates would be paid). The king is worth between $2.1 billion and $8 billion in a country where nearly one in five people live below the poverty line and where social distress has increased during the pandemic. In 2015, after the 20 February movement had shaken up society in 2011, I visited the Rabat office of the Moroccan Association for Human Rights and heard a realistic briefing about the lack of basic political freedoms in the country. Like brave human rights advocates in other countries, the Moroccans I met listed the names of people who had been unjustly arrested and laid out a picture of the difficulty of building ‘a state of truth and law’ in the country.

At the time, I heard about the case of Naâma Asfari, who had been detained in 2010 and was serving a thirty-year sentence for his activism over the occupation of Western Sahara. His case and that of Khatri Dadda, a young Sahrawi journalist arrested in 2019 and sentenced to twenty years, caught the eye of Mary Lawlor, the UN’s special rapporteur on the situation of human rights defenders. In July 2021, Lawlor said, ‘Not only do human rights defenders working on issues related to human rights in Morocco and Western Sahara continue to be wrongfully criminalised for their legitimate activities, they receive disproportionately long prison sentences and whilst imprisoned, they are subjected to cruel, inhuman and degrading treatment and torture’. Pictures of these two men and countless others are often found in the offices of human rights organisations and lawyers who work tirelessly on their behalf. These are people like Alaa and their comrades in similar struggles as far away as Colombia and India. 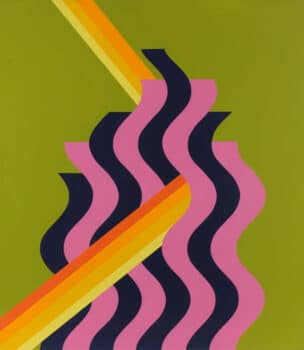 During the past few years, the Makhzen has tried to strangle Morocco’s main party of the left, the Democratic Way. It has repressed and defamed Democratic Way activists who try to organise in public, and it is preventing the party from using public premises to hold its 5th Congress this year. Despite the obstacles, Democratic Way activists have started the new year by calling for a united struggle of popular forces and has demanded that freedoms and human rights be respected and that political prisoners be released, including members of the Rif Movement, which has mobilised hundreds of thousands of people to demand social rights and justice after a fish vendor was killed by a city trash compactor in 2016. The Democratic Way also opposes the repressive Makhzen and supports the self-determination of the Sahrawi people.

Since 1975, the Moroccan state has annexed Western Sahara, but it has little legal basis for this occupation. In August 2020, the U.S. government inked the Abraham Accords, which meant that Morocco and the United Arab Emirates recognised Israel (and effectively the permanent occupation of Palestine) in exchange for arms deals and U.S. recognition of Morocco’s seizure of Western Sahara. The Polisario Front (the Sahrawi people’s liberation movement) opposed these accords as tensions grew along the Morocco-Algeria border. The Democratic Way also took a courageous stand against the accords that earned it increased repression from the Makhzen.

Reporters Without Borders ranks Morocco as 136 out of the 180 countries on its 2021 World Press Freedom Index. One of the reasons for this poor measure is the violation of the freedom of expression of Moroccan journalists and writers like Omar Radi, Maati Monjib, Hicham Mansouri, and Abdel-Samad Ait Ayyash. Fatima al-Afriqi wrote powerfully about the threats that she faced: ‘The message received, O guards with your machine guns behind sandbags of memories and dreams of my skull … I understood you who inspect my weaknesses and possible mistakes. I raise the white flag and declare by defeat, and I will withdraw from the battlefield’. She continues her brave vigil. 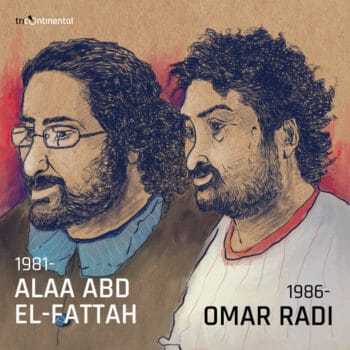 Omar Radi, like Alaa, sits in his cell in Oukacha Prison in Casablanca. He sends us a message:

Tyranny is not destiny; freedom has to be achieved, even if it takes a long time. Besides, if my time has come to pay the price on behalf of this wretched new generation, which was born before the Old and the so-called New Regime, then I am ready to pay it with all courage, and I will go to my fate with a calm, smiling heart with a relaxed conscience.

Omar, Alaa, Fatima, Ahmed, and other political prisoners around the world will not go to their fate. We will stand up beside them. We are here. As long as we are alive, we will stand.