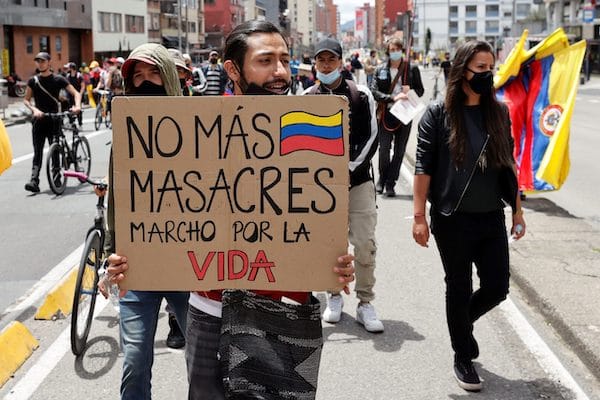 Even though you wouldn’t know if you only followed the corporate media, in January violence continued to spiral in Colombia. Human rights movements recorded an increase of attacks against police stations, military bases, and civilians and reported assassinations and intimidation against social leaders in several departments. In February, the panorama has been no different.

This Latin American country is bleeding to death before the unblinking eyes of President Iván Duque’s government. The wounds are open, especially in three areas. The first one is Arauca and North of Santander, which witnessed the worst incident since January with the massacre of at least 27 people.

The second zone is Cauca and Nariño, where there have been massacres, assassinations of social leaders, and clashes between illegal armed groups. The unrestrained violence occurring in this territory of the country has forced the displacement of 500 people and the confinement of close to 18,000 residents in the first two months of this year.

The other critical territory is Urabá, which besides being the heartland of the Clan del Golfo paramilitary successor group, is a strategic corridor in the dispute for drug trafficking. In that region, there have been 1,000 forced displacements, while close to 2,000 people are affected by being fearful to come out of their homes.

The violence seems to have no limit and is a consequence of the acute social inequality that plagues the country after decades of internal conflicts, government incompetence, corruption, drug trafficking and total compliance to the dictates of the U.S.

Back in November of 2016 a hopeful development took place when after years of negotiation and popular consultation, then-President Juan Manuel Santos and the now extinct Revolutionary Armed Forces of Colombia–People’s Army (FARC-EP) signed an agreement to end the conflict and build a stable peace in Colombia.

But the arrival of the ultra-right-wing Duque to power in 2018 dampened the people’s hope to achieve these goals. This loyal disciple of former President Álvaro Uribe and lap dog to the U.S. has been a constant polarizer and glorifier of violence, and has done everything possible to undermine the implementation of the peace accords.

Six years after the signing of the agreement in Havana, Cuba, poverty, inequality, the proliferation of illegal armed groups, and the abandonment of the State in certain regions has fueled social uncertainty and hopelessness.

From 2018 to date, more than 900 social leaders have been assassinated. Guerrillas, drug trafficking groups, and dissidents of the extinct FARC continue to operate while Duque takes no measures to protect the Colombian people.

The persistent violence prompted a wave of protests in 2020. Confrontations between police and citizens were another sign of the tensions in the country, reflecting the lack of institutional responses to social demands. Instead of listening to the people, Duque sent the Mobile Anti-Riot Squad (ESMAD) to repress and kill protesters.

Nevertheless, analysts still have hope for the future and believe that sustainable peace is possible, but only if the Peace Accords accords are fulfilled and that the Colombian people get to determine their own future without the interference of Washington. This will be the only way to reduce economic and social inequality, something so longed for by the Colombian people, who are tired of living in constant fear. Colombia, placed in the heart of Latin America, needs to close its great open wounds. They have already experienced too many years of pain.