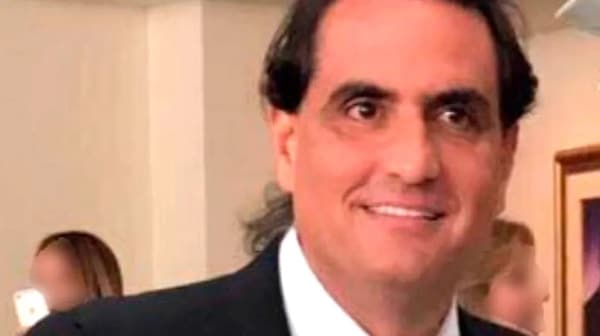 “It’s not a crime to fulfill a diplomatic mission. It’s not a crime to evade sanctions that are harming an entire country. It can’t be illegal to help a people.” Camilla Fabri Saab made these impassioned remarks when explaining the situation behind the illegal arrest and extradition–the kidnapping, in essence–of her husband, Venezuelan diplomat Alex Saab.

Saab is virtually unknown in the United States, where he is currently languishing in a Miami prison, but he has been vital to Venezuela’s ability to survive the brutal economic war being waged by the U.S.

He is a political prisoner whose case has parallels to that of Julian Assange. Both have been subjected to extraterritorial reach by U.S. authorities, as neither are U.S. citizens, and their alleged crimes took place outside of the country. Assange is in jail for telling the truth. Saab is in jail for helping feed Venezuelans.

Saab faces a charge of conspiracy to commit money laundering for his involvement in Venezuela’s housing program, and was sanctioned by the Trump administration in 2019 for his work with Venezuela’s CLAP, a program that sends food and other necessities to Venezuelan families.

Routinely referred to in the media as a Colombian businessman, Saab has dual Venezuela-Colombian citizenship and is a diplomat. He was appointed as a Venezuelan special envoy in April 2018, more than two years before his arrest.

Under the Vienna Convention and the U.S. Diplomatic Relations Act, a diplomat cannot be arrested by a foreign power. This includes diplomats who are in transit between the sending and receiving countries, Venezuela and Iran, in Saab’s case.

Alex Saab was flying from Venezuela to Iran when his plane stopped to refuel in Cabo Verde, an island country off the western coast of Africa. He was arrested without a warrant and held in Cabo Verde for nearly 500 days, as a protracted battle over his extradition to the U.S. played out in the courts.

He was beaten, denied medical care, and held in isolation. Cabo Verde ignored a ruling from a regional court ordering his release, as well as a decision by the United Nations Human Rights Committee suspending his extradition. Neither his family nor his lawyers were informed of his extradition until after it occurred.

In short, Saab was kidnapped twice: once when his plane was refueling and again when he was spirited to the U.S.

The U.S. government argues that the extradition was legal and that any violation of the Vienna Convention was committed by Cabo Verde. David Rivkin, one of Saab’s attorneys, says the fact that “Cabo Verde absolutely violated its legal obligation does not provide any excuse for the United States.”

Rivkin describes the case against Saab as “unprecedented,” given the broad and protective view the U.S. has typically held on diplomatic immunity. Saab has an April appearance in the Eleventh Circuit Court of Appeals on this very issue.

Beyond the crucial issue of diplomatic immunity, the charges and case against Saab are clearly political. For years, the U.S. has gone after key figures in Venezuela, including putting bounties on President Nicolás Maduro and others, as part of its attempts to overthrow the government.

These attempts, which include waging a barbaric and illegal economic war that has decimated Venezuela’s economy, led to increased migration and caused the deaths of tens of thousands of Venezuelans. Camila Saab rightfully calls U.S. sanctions an “act of war against the entire Venezuelan population.”

Her husband played a key role in mitigating the disastrous consequences of the sanctions. He first became involved with Venezuela by winning contracts for the Great Housing Mission, a government social program that has built 3.9 million homes for working-class Venezuelans since 2011, the majority of those with the country under sanctions.

The sanctions not only make life difficult for Venezuelans; they make it a challenge to do business with Venezuela. Banks refuse to carry out transactions, even when they’re perfectly legal. Insurance companies raise prices or back out altogether. Shipping companies raise rates. Vendors demand cash and won’t operate on credit.

Instead of pulling out from Venezuela, as many businesspeople did, Saab decided to stick with the Venezuelan people and went from the private sector into the public one, becoming a diplomat tasked with finding “practical solutions” to the “economic and financial blockade” imposed on Venezuela since 2015, which included brokering trade deals with Iran.

The economic relationship with Iran has been critical in helping with the recuperation of Venezuela’s oil industry, and by extension, its economy.

Saab played a critical role in trade agreements between Iran and Venezuela for everything from gasoline and spare parts to food and medicine. According to Forbes, Saab was a target of the U.S. because he had “the means and know-how to help discreetly keep an entire economy moving under the eyes of a watching world.”

Saab has denied the allegations against him, and points to a Swiss investigation that was dropped after three years due to a lack of evidence.

“The merits of the charges are weak on their face. They involve activities that did not take place in the United States and their connection to the U.S. is very tenuous,” says attorney David Rivkin.

Saab’s arrest in Cabo Verde, at the behest of the U.S. government, came just months after Trump announced a “maximum pressure” campaign on Venezuela. His extradition to the U.S. derailed the dialogue between the Venezuelan government and opposition.

The U.S. now plans to “pressure” Saab “to shed light on Venezuela’s post-sanction economic network,” according to Forbes. After enduring torture in Cabo Verde, the word pressure is an understatement.

“Since the day he flew to Iran, they have persecuted all of us. We have been harassed in the media, they have demonized us, they have not let us see him,” Camilla Saab said, describing what her family has been through.

A cancer survivor, Alex Saab hasn’t been able to take his daily medicines since his arrest. He has lost 65 pounds. His parents died of COVID-19 while he was imprisoned in Cabo Verde.

Saab’s family has been targeted too. His adult children were sanctioned by the Trump administration. His youngest daughter has never met him. Yet in all of his communications, Saab maintains his allegiance to the Venezuelan people.

In persecuting him, Camila Saab believes the U.S. is sending a message:

They’re trying to intimidate but the Venezuelan people resist and continue in their fight for sovereignty. The U.S. is not the world’s police force. Free Alex Saab!

Leonardo Flores is a Latin American policy expert and campaigner with CODEPINK.