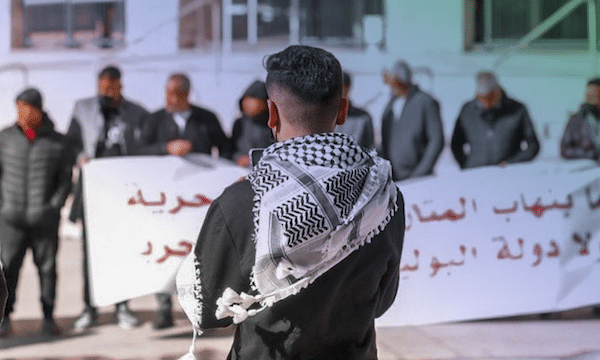 The residents of Sa’wa and other Palestinian Bedouins are resisting Israeli regime police forces’ attempts to displace them.

On Monday, January 10, the residents of the Bedouin village Sa’wa in the Naqab–commonly known in English as the Negev—, woke up to the sounds of Israeli police forces and bulldozers storming in, intending to complete the afforestation plan that had already begun at the end of December.

The village’s residents and other Palestinian Bedouins from the Naqab resisted Israeli regime police forces who, in turn, met them with a harsh crackdown.

The Israeli police forces and bulldozers withdrew on Wednesday evening the same week, but returned on Thursday. They were met with a peaceful demonstration organized by the residents, and accompanied by Palestinian Bedouin activists from the Naqab and beyond.

This demonstration was once again met with brute force and left dozens of injured and detained. The arrests were not limited to the participants in the Sa’wa village demonstration. The spark that erupted from this particular village ignited something in other Palestinian Bedouin towns. Solidarity demonstrations with the village of Sa’wa and al-Atrash, another Palestinian Bedouin village facing demolitions, took place across colonized Palestine. In the Naqab in particular, hundreds were detained, 40 percent of whom are minors.

A few days after these demonstrations, the Israeli regime’s police forces began storming homes, prosecuting and arresting young men and women, even children, on charges of committing riots and obstructing police work. It was collective punishment for their participation in demonstrations in support of the Sa’wa village. But even amidst the crackdown and arrests, Palestinians in the Naqab did not cease to resist.

Under the slogan “We will not leave the detainees alone”, vigils were organized in front of the court in the city of Be’r Al-Sabeh (Be’er Shevah). Over the course of seven days, people of the Naqab, and of all generations, gathered in front of the court, protesting against the continued detention of young men and women and children. These vigils are still continuing and the activists have pledged that they will keep them going until the last detainee is released.

These latest escalations in violence towards Palestinians has brought the Naqab front and center in the struggle against settler colonialism. The Naqab, located in the south, is Palestine’s largest district. Since the Nakba and ethnic cleansing in 1948, it’s surviving residents have faced continuous displacement and land theft. In what many activists call slow displacement, the Israeli regime uses various mechanisms to tighten its grip on the lands of the Naqab and to continue what it started in 1948.

One such method is what Sa’wa has been facing–the demolition of homes in the village. Dozens of them are demolished in the Naqab every year, under the pretext of unlicensed construction. As a policy, however, they are used to limit population expansion and to damage the social fabric of communities. 3,000 homes were demolished in 2021 alone.

The Israeli regime also uses “greenwashing”–claims of environmentalism–to appropriate land. In the Naqab in particular, the regime claims to be fighting desertification and trying to preserve the environment by planting large areas of land with artificial forests of cypress and pine trees. Yet recent research has shown that these trees–which are not native to the land–are actually contributing to desertification. At the same time, the “Israel Lands Administration” has started explicitly stating that afforestation is done to prevent “Arab appropriation of their lands.”

The Israeli regime also claims that Palestinian Bedouins are invaders residing in the state’s lands illegally. That’s a claim the government itself contradicted when it offered compensation and sums of money to the people of a village named Al-Araqib to give up their land. As Naqab resident Sheikh Sayah Al-Turi said:

If I were truly an invader of the land, why are you offering me compensation for giving up this land.

Whilst simultaneously claiming that Palestinian Bedouins are invaders, the Israeli regime has consistently pursued a policy of “civilizing” the Bedouins. This has resulted in thousands of Palestinian Bedouins being forcibly moved from their ancestral lands to sedentary townships, enabling the regime to swallow up huge areas of land whilst concentrating the Bedouin population in the smallest possible area.

The story of Sa’wa is the story of Palestine, from the West Bank to Jerusalem and beyond. Palestinian homes are demolished, and Palestinian families are expelled to make way for the Israeli settler population and Israeli regime infrastructure.

Yet, the emergence of organized movements against the Israeli regime’s land theft across colonized Palestine demonstrates the steadfastness of the Palestinian people from the Naqab to Sheikh Jarrah.

We have the right to live on our land, and this is what we want and strive for!