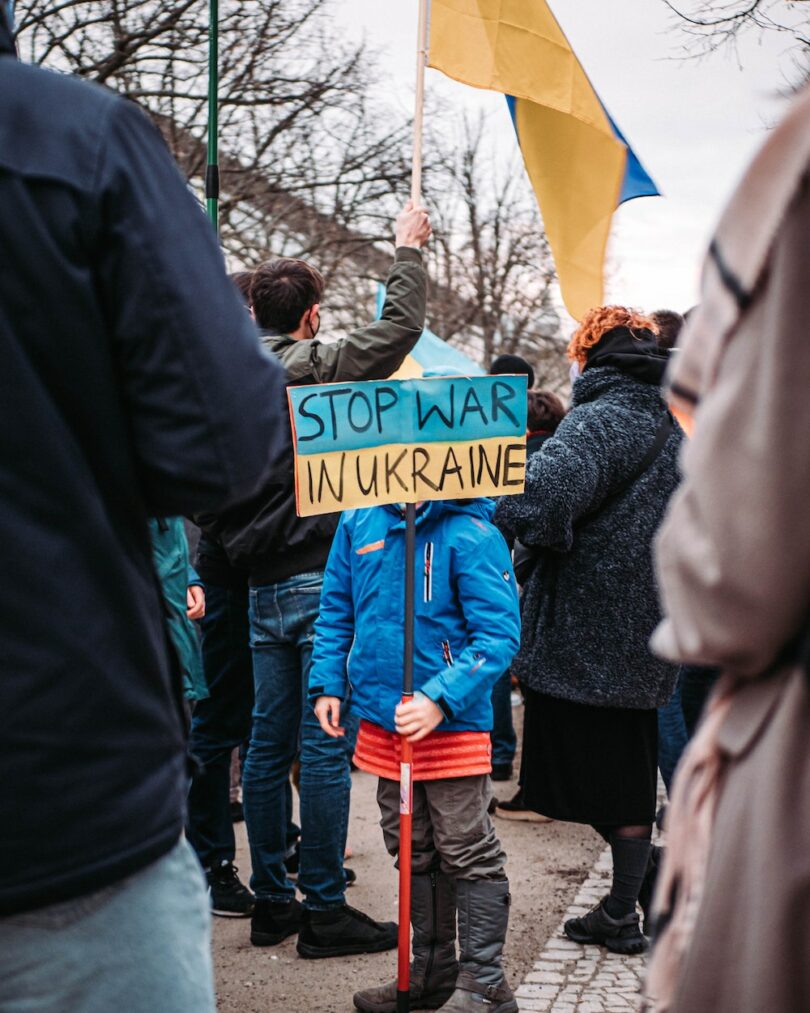 This is a provisional text David Harvey prepared for the 2022 American Association of Geographers Annual Meeting. He allowed us, nevertheless, to publish it here because of the escalating Russia-Ukraine crisis.

The outbreak of full-fledged war with the Russian invasion of Ukraine marks a deep turning point in the world order.  As such it cannot be ignored by the geographers assembled (alas by zoom) at our annual meeting, I therefore offer some non-expert comments as a basis for discussion.

There is a myth that the world has been at peace since 1945 and that the world order constructed under the hegemony of the United States has largely worked to contain the war-like proclivities of capitalist states in competition with each other. The inter-state competition in Europe that produced two world wars has largely been contained, and West Germany and Japan were peaceably re-incorporated into the capitalist world system after 1945 (in part to combat the threat of Soviet communism).  Institutions of collaboration were set up in Europe (the common market, the European Union, NATO, the euro).  Meanwhile, “hot” wars (both civil and inter-state) have been waged in abundance since 1945, beginning with the Korean and Vietnam wars followed by the Yugoslav wars and the NATO bombing of Serbia, two wars against Iraq (one of which was justified by patent lies by the U.S. about Iraq’s possession of weapons of mass destruction), the wars in Yemen, Libya, and Syria.

Up until 1991, the Cold War provided a fairly constant background to the functioning of the world order. It was often manipulated to their economic advantage by those U.S. corporations that constitute what Eisenhower long ago referred to as the military industrial complex. Cultivating fear (both fake and real) of the Soviets and Communism was instrumental to this politics. The economic consequence has been wave after wave of technological and organizational innovation in military hardware. Much of these spawned widespread civilian uses, such as aviation, the internet, and nuclear technologies, thus contributing in a major way to the support for endless capital accumulation and the increasing centralization of capitalist power in relation to a captive market.

Furthermore, resort to “military Keynesianism” became a favoured exception in times of difficulty to the neoliberal austerity regimes otherwise periodically administered to the populations of even the advanced capitalist countries after 1970 or so. Reagan’s resort to military Keynesianism to orchestrate an arms race against the Soviet Union played a contributory role in the end of the Cold War at the same time as it distorted the economies of both countries. Before Reagan, the top tax rate in the U.S. never fell below 70 percent while since Reagan the rate has never exceeded forty percent, thus disproving the right wing’s insistence that high taxes inhibit growth. The increasing militarization of the U.S. economy after 1945 also went hand in hand with the production of greater economic inequality and the formation of a ruling oligarchy within the USA as well as elsewhere (even in Russia).

The difficulty Western policy elites face in situations of the current sort in the Ukraine is that short-run and immediate problems need to be addressed in ways that do not exacerbate the underlying roots of conflicts. Insecure people often react violently, for example, but we cannot confront someone coming at us with a knife with soothing words to assuage their insecurities.  They need to be disarmed preferably in ways that do not add to their insecurities.  The aim should be to lay the basis for a more peaceful, collaborative, and de-militarised world order, while at the same time urgently limiting the terror, the destruction, and the needless loss of life that this invasion entails.

What we are witnessing in the Ukraine conflict is in many respects a product of the processes that dissolved the power of actually existing communism and of the Soviet Regime. With the end of the Cold War, Russians were promised a rosy future, as the benefits of capitalist dynamism and a free market economy would supposedly spread by trickle down across the country. Boris Kagarlitsky described the reality this way. With the end of the Cold War, Russians believed they were headed on a jet plane to Paris only to be told in mid-flight “welcome to Burkina Faso.”

There was no attempt to incorporate the Russian people and economy into the global system as happened in 1945 with Japan and West Germany and the advice from the IMF and leading Western economists (like Jeffrey Sachs) was to embrace neoliberal “shock therapy” as the magic potion for the transition. When that plainly did not work, Western elites deployed the neoliberal game of blaming the victims for not developing their human capital appropriately and not dismantling the many barriers to individual entrepreneurialism (hence tacitly blaming the rise of the oligarchs on the Russians themselves).  The internal results for Russia were horrendous.  GDP collapsed, the ruble was not viable (money was measured in bottles of vodka), life expectancy declined precipitously, the position of women was debased, there was a total collapse of social welfare and government institutions, the rise of mafia politics around oligarchic power, capped by a debt crisis in 1998 to which there seemed to be no path for an off-ramp other than begging for some crumbs from the rich folks’ table and submitting to the dictatorship of the IMF. The economic humiliation was total, except for the oligarchs. To top it all, the Soviet Union was dismembered into independent republics without much popular consultation.

In two or three years, Russia underwent a shrinkage of its population and economy along with the destruction of its industrial base proportionally more than that experienced through deindustrialization in the older regions of the United States over the preceding forty years.  The social, political, and economic consequences of deindustrialization in Pennsylvania, Ohio and throughout the Mid-West have been far-reaching (embracing everything from an Opioid epidemic to the rise of noxious political tendencies supporting white supremacism and Donald Trump). The impact of “shock therapy” upon Russian political, cultural, and economic life was predictably far worse.  The West failed to do anything other than gloat at the supposed “end of history” on Western terms.

Then there is the issue of NATO.  Originally conceived as both defensive and collaborative, it became a primary war-like military force set up to contain the spread of communism and to prevent inter-state competition in Europe taking a military turn. By and large it helped marginally as a collaborative organizational device mitigating inter-state competition in Europe (though Greece and Turkey have never worked out their differences over Cyprus). The European Union was in practice much more helpful. But with the collapse of the Soviet Union, NATO’s primary purpose disappeared. The threat to the military industrial complex of the U.S. population realizing a “peace dividend” by sharp cuts in the defense budget was real.  Perhaps as a result, NATO’s aggressive content (always there) was actively asserted in the Clinton years very much in violation of the verbal promises made to Gorbachov in the early days of perestroika. The U.S. led NATO bombing of Belgrade in 1999 is an obvious example (when the Chinese Embassy was hit, though whether by accident or design is not clear).

The U.S. bombing of Serbia and other U.S. interventions violating the sovereignty of smaller nation states is evoked by Putin as precedent for his actions. The expansion of NATO (in the absence of any clear military threat) up to Russia’s border during these years was strongly questioned even in the U.S., with Donald Trump attacking the logic of NATO’s very existence. Tom Friedman, a conservative commentator writing recently in the New York Times, evokes U.S. culpability for recent events through its aggressive and provocative approach to Russia by way of NATO’s expansion into Eastern Europe. In the 1990s it appeared as if NATO was a military alliance in search of an enemy. Putin has now been provoked enough to oblige, obviously angered by the humiliations of Russia’s economic treatment as a basket case and Western dismissive arrogance as to Russia’s place in the global order.

Political elites in the U.S. and the West should have understood that humiliation is a disastrous tool in foreign affairs with often lasting and catastrophic effects. The humiliation of Germany at Versaille played an important role in fomenting World War Two. Political elites avoided repetition of that with respect to West Germany and Japan after 1945 by way of the Marshall Plan only to repeat the catastrophe of humiliating Russia (both actively and inadvertently) after the end of the Cold War. Russia needed and deserved a Marshall Plan rather than lectures on the probity of neoliberal solutions in the 1990s. The century and a half of China’s humiliation by Western Imperialism (extending to that of Japanese occupations and the infamous “rape of Nanjing” in the 1930s) is playing a significant role in contemporary geopolitical struggles. The lesson is simple: humiliate at your peril. It will come back to haunt if not bite you.

None of this justifies Putin’s actions, any more than forty years of deindustrialization and neoliberal labour suppression justifies the actions or positions of Donald Trump. But neither do these actions in the Ukraine justify the resurrection of the institutions of global militarism (such as NATO) that have contributed so much to the creation of the problem. In the same way that the inter-state competition within Europe needed to be demilitarized after 1945, so inter power-bloc armaments races need to be dismantled today and supplanted by strong institutions of collaboration and cooperation. Submitting to the coercive laws of competition, both between capitalist corporations and between power blocs, is the recipe for future disasters, even as it is still regrettably seen by big capital as the supportive pathway for endless capital accumulation in the future.

The danger at a time like this is that the smallest error of judgment on either side can easily escalate into a major confrontation between nuclear powers, in which Russia can hold its own against hitherto overwhelming U.S. military power. The unipolar world U.S. elites inhabited in the 1990s is already now superseded by a bi-polar world. But much else is in flux.

On January 15th, 2003, millions of people all around the world took to the streets to protest the threat of war in what even the New York Times conceded was a startling expression of global public opinion. Lamentably they failed, leading into two decades of wasteful and destructive wars all around the world. It is clear that the people of the Ukraine do not want war, the people of Russia do not want war, the European people do not want war, the peoples of North America do not want yet another war. The popular movement for peace needs to be rekindled, to reassert itself. Peoples everywhere need to assert their right to participate in the creation of the new world order, based in peace, cooperation, and collaboration rather than competition, coercion, and bitter conflict.