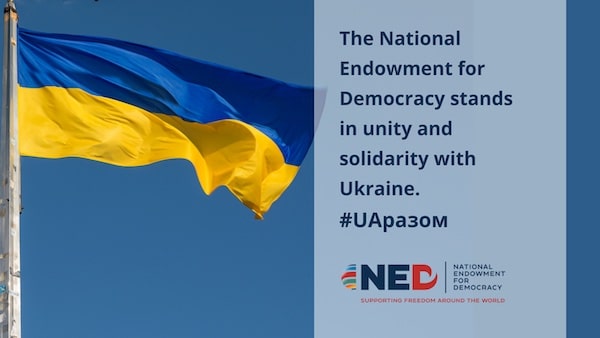 The National Endowment for Democracy (NED)—a CIA offshoot founded in the early 1980s to advance “democracy promotion” initiatives around the world—has deleted all records of funding projects in Ukraine from their searchable “Awarded Grants Search” database.

Searching using “Ukraine” as a keyword (as opposed to a “Project Country” in the original captures) yields “No results found.” Searching for the titles of the funded projects listed in the last “intact” web capture yields no results.

Additionally, the current database search criteria have been restricted, previously funding from 2014 to present could be searched, currently only 2017 to present is searchable per the drop-down menus. There are multiple news reports before February 25 corroborating this $22,394,281 amount.

The erasure of the NED’s records is necessary to validate the Biden administration’s big lie—echoed in the media—that the Russian invasion of Ukraine was “unprovoked.”

In a recent statement of solidarity with Ukraine, the NED acknowledged that it had been a “proud partner of Ukraine’s civil society groups, media outlets, and human rights defenders since 1989—before the Ukrainian people declared independence in 1991—as they have confronted enormous challenges in building an independent and free country.”

NED President Duane Wilson admitted at an NED forum on Ukraine on March 4 that Ukraine was the NED’s fourth largest grant-making program around the world. Wilson said that “the endowment is proud that we have had Ukraine as a major partner since 1989, before independence, supporting Ukrainian civil society organizations.”

The NED’s anti-Russian agenda was detailed by one of the speakers at the March 4th forum, Olha Aivagurski, who said that a lot of her work with an NED funded NGO focused on documenting Russian war crimes.

It includes footage of excavation of mass grave sites in Donbass where neo-Nazi militias attached to the Ukrainian army massacred and then buried hundreds of civilians.[1]

The NED, however, is committed to advancing the cartoonish narrative depicting Ukraine as a valiant David fighting the evil Russian bear.

NED activists employed a broad public relations strategy that included: a) busing paid out-of-town protesters into Kyiv; b) creating an online TV protest station and agitation paraphernalia; and c) providing offshore training to the anti-Yanukovych student leadership. The strategy was based on the writings of Gene Sharp and a template that the NED had successfully employed in Serbia with a youth group called “Otpor,” which helped secure the defeat of socialist Slobodan Milosovic in September 2000 elections.

A parallel approach was used during the February 2014 Maidan Square uprising which resulted in Yanukovych’s ouster—he had been reelected in 2010—and the advent of a pro-Western regime in Kyiv.

During the fall of 2013, the NED named as a Dante Fascell fellow Sergii Leschenko, a journalist who exposed how Yanukovych had paid Republican party strategist Paul Manafort $1.2 million as a political consultant.[2]

As a sign of the NED’s influence, Ukrainian President Petro Poroshenko (2014-2020)—a main beneficiary of the Maidan coup currently awaiting trial on treason charges—bestowed the Order of Princess Olga, one of Ukraine’s highest honors, on Dr. Nadia Diuk,[42] a former vice president and senior adviser to the NED for Europe and Eurasia.

In 2020, the NED provided $4.6 million to Ukraine for purposes that included raising awareness of alleged human rights abuses by Russia in Crimea and eastern Ukraine, and fomenting opposition and resistance to Russia.

The large scope of the NED’s program makes clear the organization’s importance. However, with the Biden administration intent on preserving the fiction that the Russian invasion/counter-offensive was unprovoked, censorship and the deletion of records is necessary.

[Camilla Thompson contributed to the reporting.]

A U.S. journalist quoted in the film, George Eliason, stated that he repeatedly sent reports of war crimes to American media outlets which ignored him.

Leschenko subsequently became a member of parliament where he lobbied for Ukraine’s closer integration with Europe. At the time, Leschenko joined the party of Ukraine’s fifth president Petro Poroshenko, but then supported neoliberal Volodymr Zelensky. When Russia invaded Ukraine in February 2022, Leschenko compared Vladimir Putin to Adolf Hitler.