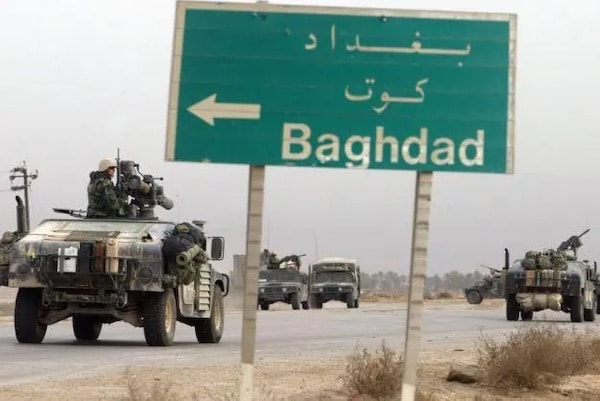 Numerologists tell you that 19 is 1 + 9 which equals the powerful # 1, or new beginnings. Well, 19 years ago on March 19, coincidentally,  my nation orchestrated the most horrific deed since God knows when.

The illegal and immoral attack, invasion and subsequent occupation of Iraq really upset the world’s applecart. The carpet bombing of Baghdad and other key areas destroyed their infrastructure, and of course destroyed thousands of lives.

As our military nested in safe zones of occupation, with plenty of good drinking water and air conditioning, millions of Iraqis stood in line for hours to quench their thirst, and waited hours for a few moments of cool A/C.

The ‘Evil Hitler’ Saddam, who was actually aided into power by our CIA decades earlier, ran for cover. The die had been cast by the Bush/Cheney Cabal, and they made sure that friends of the administration made billions in contracts to (tongue in cheek) Rebuild Iraq.

The Cabal made sure to protect the oil fields while the rest of Iraq burned.

The real horror of it all was the door being opened for what we later labeled ISIS, as thousands of those folks slipping into Iraq. Interesting that under Saddam Hussein, as terrible as he was, ISIS and Hussein were enemies.

Meanwhile, back at the ranch, and I do not just mean Crawford, Texas, where Junior Bush relaxed while running our nation ( actually, it was Cheney et all who ran things), the wonderful Two Party/One Party gang opened up the checkbook. The increased spending broke all records for our Military Industrial Empire.

Scores of military contractors were sucking at the teat and slurping at the trough for your tax dollars, money that would normally go to tighten our safety net… gone now forever!

Over 4000 U.S. military were killed during our occupation, with over 30,000 casualties. One legged, one eyed, one armed and PTSD suffering soldiers (if lucky to still have the other part of their being) came home to never be the same.

Perhaps one million plus Iraqis were dead due to our actions. Millions of Iraqis became refugees.

Regardless of who you believe, the horror precipitated by my country affected not only the victims over there, but millions of Americans. We became a divided  nation, echoing what occurred during the Vietnam phony war.

We who opposed the Bush/Cheney Cabal’s actions stood on the street corners of our town and heard the anger generated at us. Of course, many of us sent that anger right back to the fools who supported such evil deeds. Sad.

The morning of that tragic day this writer was having breakfast while watching the boob tube news. No matter what channel I scrolled to, I saw nothing short of cheerleading.

Watching the carpet-bombing campaign of Baghdad brought tears to my eyes. I remember that great journalist Lester Holt telling us the success of the invasion force. Lester made his ‘bones’ and now is one of NBC’s top anchors, even moderating the presidential debates.

Little Katie Couric rolled through the hallways of her station shouting ‘Marines Rock!’

Throughout the boob tube dials the media whores were so proud.

Then, after the invasion was moving forward we could see the press conferences by our invaders… always dressed in camouflage, as if they were anywhere near  the front lines. We had all the empire’s (supposed) news channels propping up a myriad of retired U.S. generals and admirals acting as if this was D-Day 1944. [Nazi propagandist Joseph] Goebbels would have been proud.

Philip A Farruggio is regular columnist on It’s the Empire… stupid website. He is also frequently posted on Nation of Change, Countercurrents., Smirking Chimp and Independent Australia sites. He is the son and grandson of Brooklyn New Yirk City longshoremen and a graduate of Brooklyn College, class of 1974. Since the 2000 election debacle Philip has written over 400 columns on the Military Industrial Empire and other facets of life in an upside down America. He is also host of the ‘ It’s the Empire… Stupid ‘ radio show, co produced by Chuck Gregory.