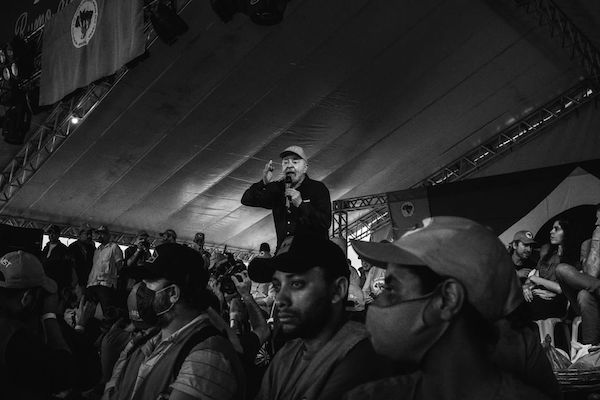 Agrarian reform and agroecology were topics discussed during Lula’s visit yesterday to the Eli Vive settlement, belonging to the Landless Rural Workers Movement (MST), in Londrina (PR), the largest agrarian reform area in a metropolitan region of Brazil. The meeting was part of the activity “Solidarity Day: Towards Popular Committees” and gathered some 10,000 people.

In his speech, presidential candidate Luiz Inácio Lula da Silva (PT) pointed out that one of his priorities is to fight hunger in the country, encourage family farming and recover national sovereignty.

Hunger is one of the most barbaric things that society has allowed to happen to it. This world does not have to be unequal as it is. Family farming has the capacity to feed our country. We need to recover Brazilian sovereignty. A sovereign country takes care of education, forests, water, food and people.

In his talk Lula also evaluated the current composition of the National Congress and referred to the importance of the candidates elected to the House, Senate and state governments who bet on the popular struggle.

“Brazil’s National Congress has never been so deformed and so anti-popular as it is now. It has never been so submissive to anti-national interests as now. This is perhaps the most anti-Brazilian Congress. It is important to remember that it is not enough to elect Lula president, if we do not change the quality of the elected deputies and senators”, he says.

Also present at the meeting were PT president and federal deputy for Paraná, Gleisi Hoffmann, former senator Roberto Requião, MST national leaders João Pedro Stedile and João Paulo Rodrigues and culinary expert Bela Gil, who made one of the first speeches of the meeting defending the Agrarian Reform.

“All Brazilians need to have the opportunity to choose the food they want on their plate. Popular agrarian reform and incentives for family farming are fundamental to democratize access to land. That way, people will have healthy food on their plate,” she said.

Gleisi Hoffmann highlighted the performance of the MST, especially during the pandemic and outlined the path that Lula’s campaign will take in the electoral process.

If there is one characteristic of the MST, it is solidarity. In all the struggles of the people, the MST is present. Today Lula is free, innocent, he is ready to be president and we have to prepare that path. The Brazilian people are putting hope in us. We have been discussing how we have to organize ourselves not just here in Paraná, but also in Brazil

The candidate for government of Paraná Roberto Requião highlights the importance of the movements that define an agrarian reform for the construction of public policies for the country.

My indignation finds hope in you (MST). We need a governor who walks together with the people. We are going to win this battle which is a battle for identity. The identity of the people.

Agroecology and the struggle for land were highlighted in João Pedro Stédile’s speech, who affirmed that it is only “through popular union that the people manage to advance.”

The real goal of agrarian reform is to produce healthy food for everyone. We need a big national agroecology program to build agrarian reform. The popular committees are the people who tell Lula what they want to change in Brazil.

During a visit, the Workers’ Party initiated a project to create, by April, 5,000 popular struggle committees throughout the country.

The idea is to strengthen the PT’s grassroots work through a network involving social movements and the population. The strategy is part of the two main objectives of the party for 2022: the reduction of setbacks promoted by the governor of Jair Bolsonaro (PL), and the election of Lula in the dispute in October.