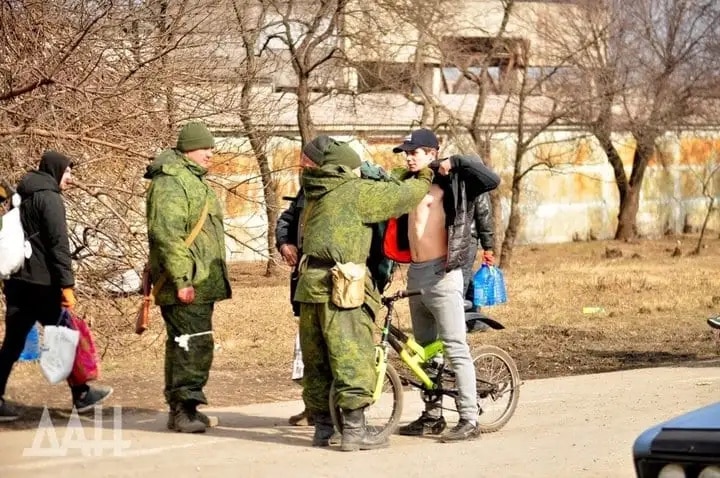 In December 2014, a young Russian communist named Andrey Sokolov was visiting the newly formed Donetsk People’s Republic. He went to meet a friend who’d been driven into exile from Ukraine after the U.S.-backed far-right coup d’etat in Kiev earlier that year.

Sokolov took a wrong turn and wound up at a checkpoint controlled by the Ukrainian Armed Forces. He was arrested and “disappeared” for nearly two years in the occupied city of Mariupol.

Sokolov was held for a long time in a bare cell in a secret prison. He was denied contact with the outside world, given little food, was tortured, and witnessed Ukrainian militants using cutouts of leaders from the Donetsk and Lugansk People’s Republics for target practice.

Eventually supporters were able to track Sokolov down with help from locals. As reports seeped out about his case, and those of others “disappeared” by the Security Service of Ukraine (SBU) and the neo-Nazi Azov Battalion, Sokolov was offered a plea deal, which he accepted, and a court ordered him released with time served.

Upon his release, though, he was kidnapped by goons in plainclothes and held captive in another location.

Ukraine’s government eventually felt obliged to allow a visit to Mariupol by human-rights investigators from the Organization for Security and Cooperation in Europe (OSCE). Sokolov’s captors debated what to do with him. He was probably closer to death at that moment than he had ever been during his ordeal. 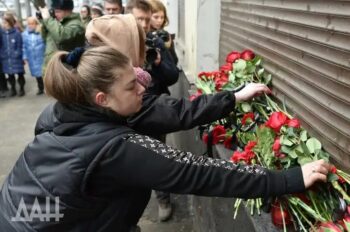 People in Donetsk bring flowers to the site where 20 people were killed by a Ukrainian missile attack. (Photo: Donetsk News Agency)

Eventually the order came down from above: There was too much attention to Sokolov’s case to dispose of him permanently. Instead he was put in a taxi headed to the Russian border and given bus fare to Moscow. That was in the autumn of 2016 – almost two years after his fateful wrong turn.

Mariupol and the Big Lie

Mariupol has been in the news a lot recently. It’s been a major hotspot in the joint military operation by the Donbass People’s Republics and Russia to demilitarize and denazify Ukraine.

The U.S. and other Western media mostly ignored Mariupol for the eight years it was under fascist occupation. They couldn’t have cared less for the workers and political activists like Sokolov who had to live under the thumb of the Azov Battalion and Ukrainian security forces.

Now that the Azov nazis are being routed by the Donetsk People’s Militia and Russian Armed Forces, newspapers, TV networks and social media are full of stories claiming “Russian war crimes” in Mariupol.

First there was a story about Russia attacking a maternity hospital. But as Russia’s First Deputy Permanent Representative to the United Nations Dmitry Polyansky said at a UN Security Council meeting, there were no patients in the hospital; it was being used as an Azov base. Local residents had reported that days before.

Then it was the city’s theater that Russia had allegedly attacked, killing many civilians sheltering inside. Photos of the blown-out theater were plastered across screens worldwide. But later, the quisling Mariupol City Council quietly admitted that nobody died. According to Russian and DPR sources, the theater explosion was actually carried out by Azov. (The Grayzone has published an extensive investigation around the theater claims.)

A Turkish mosque in the city was said to have been attacked by Russian troops. But no. “Our mosque remained undamaged,” Ismail Haciogl told Andalou Agency March 12.

More recently, the claim was made about a school being attacked. Many children supposedly dead or wounded as a result. But again, it was a case of Azov using civilian facilities to hide its paramilitaries and storehouses of weapons.

The Biden administration, NATO and the corporate media don’t believe the claims they make, and they don’t really care if they are later exposed as untrue. The impact comes from piling lie upon lie, confident that the original outrage is what will be remembered. So many people “know” it happened, it must be true.

U.S. imperialism is the best student of Nazi propagandist Joseph Goebbels’ strategy of the “Big Lie.”

Mariupol is not part of Ukraine, as the media claim. It’s part of the Donetsk People’s Republic. It’s the DPR’s only major seaport.

Mariupol’s occupation by Ukraine since mid-2014 has caused enormous harm to the people of Donbass, because it prevents them from being able to move goods through the Sea of Azov.

More than that: it’s been a seething wound in the republic’s side. The Azov nazis, armed and trained by NATO, have launched many attacks on civilians in free Donetsk from their stronghold. And it posed a constant threat near the border with Russia.

Washington and Kiev stockpiled weapons and troops in Mariupol for the planned Ukrainian invasion of Donbass earlier this year – an invasion cut short only by the defensive military operation by Donetsk, Lugansk and Russia.

Now, block by block, building by building, Mariupol is being liberated at last as DPR and Russian troops advance, driving the Azov rats into a shrinking zone. On March 23, the Donetsk government reported that 70% of residential buildings had been cleared of occupiers.

For the first month of the armed conflict, Azov held the residents of Mariupol hostage. They repeatedly sabotaged the humanitarian corridors Russian and DPR troops provided for civilians to safely leave the city, even shooting people trying to leave. Only when the assault on the city had begun and the neo-Nazis began to lose ground were people able to begin fleeing in large numbers.

Refugees from Mariupol are being welcomed in areas of the DPR away from the front lines, and in Western Russia. As they leave the city, the armies of liberation provide them with water, food and first aid. Many tell journalists harrowing stories of their ordeal under Azov rule.

Regular Ukrainian soldiers who put down their weapons are also free to evacuate. But first DPR Militia troops check all men leaving the city for tattoos that would mark them as fascist combatants trying to sneak out.

By the way: When DPR and Russian troops liberated the Mariupol airport, they uncovered an abandoned secret prison run by the Azov Battalion. Perhaps this is where Andrey Sokolov was held.

In contrast, Donetsk, the capital city of the DPR, is a place you don’t hear about much. Its inhabitants are only referred to in the corporate media as “separatists” and “Putin’s proxies.” To Azov and the other Ukrainian nazi groups, they are “roaches” and “cattle” fit only for slaughter.

But the residents of Donetsk are multinational workers. Miners and metalworkers. Teachers and students. Activists and political refugees. Mothers and fathers, grandparents, children. Notice that Joe Biden and Lindsay Graham have no disagreement on this: You shouldn’t know they exist, or care when they are killed.

As the People’s Militia has pushed forward to liberate the occupied portions of their region, like Mariupol, the increasingly desperate Ukrainian troops dug in on the outskirts of Donetsk have been lashing out, deliberately targeting civilians (as they have throughout their eight-year war on Donbass) with increasingly deadly weapons.

These aren’t fabricated or exaggerated stories like those in Mariupol and other areas of Ukraine, reported by CNN and the New York Times through crocodile tears. These are the lives of working-class people who have been subject to nearly a decade of endless war and blockade, but have stayed strong and resisted the U.S.-orchestrated attacks on them.

On March 14, a Tochka-U missile was fired by Ukrainian forces at downtown Donetsk. There are no military installations in the area; the only purpose was to terrorize the population.

DPR air defense shot down the missile, saving untold lives. Unfortunately, one of the cluster bombs in the missile’s payload survived, and hit the ground on a busy street. At least 20 people were killed, including a child and senior citizens on a bus. Dozens were wounded.

Cluster munitions are banned under international law. Their use is a war crime.

The next day, another missile was launched at Makeyevka on the outskirts of Donetsk – an area that has been pummeled nearly daily for years by Ukrainian artillery. This time, luckily, no one died, but six people were wounded, including two children.

Another attack came March 18 on a shopping area in Donetsk. Four women were killed.

Since then, Ukraine’s military fired Tochka-U missiles on the Proletarskiy and Zelyonyi districts of Makeyevka March 21 and Karla Marksa township in Enakiyevo on March 22.

Russia’s permanent representative to the United Nations called out Under-Secretary-General Rosemary DiCarlo, who repeated unsubstantiated claims about Russia’s conduct but “did not find a single word to say about today’s strike by a Ukrainian Tochka-U missile with a cluster bomb at central Donetsk.”

In 2014, the people of the Donetsk and Lugansk regions voted for independence and their right to live free of a Ukraine dominated by fascists and U.S.-NATO imperialism. They have resisted untold horrors for eight years – horrors which continue today. Their struggle is a righteous one, and they will win.