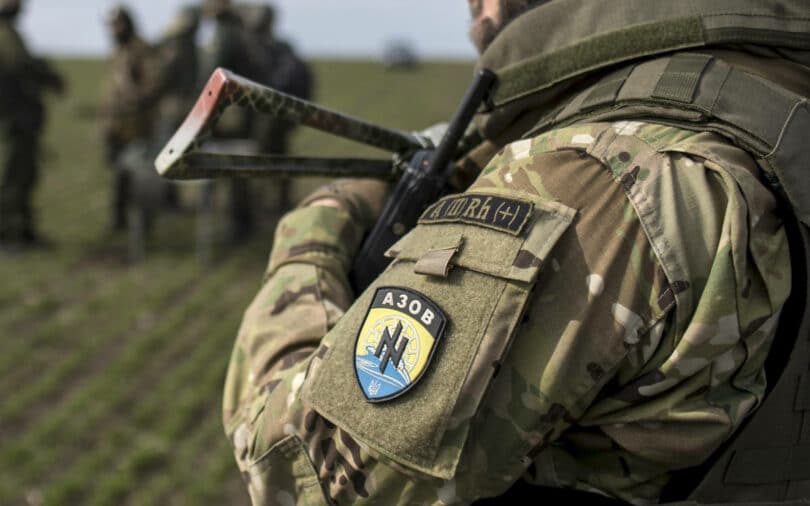 On 20 March 2022, while we were conducting a humanitarian mission near Sartana, on the north-eastern outskirts of Mariupol, we came across many civilians who had recently fled Mariupol thanks to the advance of Russian and DPR (Donetsk People’s Republic) troops. One of them, Nikolay, agreed to talk on camera about the crimes committed by the neo-Nazi Azov regiment against the inhabitants. A testimony confirmed by other civilians who managed to evacuate the city.

As we deliver the last of our food supplies and baby nappies to the fifth village in our humanitarian mission near Sartana, a man comes out of the house where he is staying and starts talking to us. We discover that he has recently managed to flee Mariupol, after three weeks of horror.

I ask him if he knows by any chance what really happened in the Mariupol maternity hospital and theatre, about which the Western media have recently made their headlines. And there surprise, Nikolay knows what happened there, he saw with his own eyes, how the maternity hospital was transformed into a military position and a firing position by the fighters of the Azov regiment (which he still calls Azov battalion by the way). He confirms that the hospital had been evacuated to another area and was therefore no longer in working order.

He also explains that the dramatic theatre in Mariupol was not destroyed at all by a bombing by the Russian army, but that the fighters of the Azov regiment blew it up!

Nikolay goes on to explain that Ukrainian soldiers (whether from the regular army or the neo-Nazi Azov regiment) would not let civilians out of Marioupol, he says that they shot at a column of cars trying to evacuate the town, and that bodies still lie along the highway they drove on.

This is confirmed by the testimony of other civilians who were interviewed by Anna News colleagues as they left Mariupol (English subtitles):

Nikolay ends with some chilling facts about how his 17-year-old niece was almost dragged into the basement where the Azov fighters are holed up. He says that other girls, including minors, have been taken there by Ukrainian neo-Nazis. He does not talk openly about rape, as there are children nearby when we discuss it, but he simply says that “everyone knows what they do to them”.

This testimony reminds me of others. Former prisoners recovered by the DPR during exchanges had told me in private discussions that young girls were disappearing in Mariupol, that they were raped by neo-Nazi fighters and then executed.

A former prisoner who had been tortured in a neo-Nazi battalion prison, and who was interviewed by my colleague Laurent Brayard at the beginning of 2016, recounted how several other prisoners had been raped by Ukrainian fighters, before some of them suddenly disappeared.

A technique also used by the SBU in the famous secret prison called “the library”, located in the basement of Mariupol airport, as revealed by a former prisoner, Yulia Prosolova.

The airport has just fallen under the control of the DPR’s popular militia (which invalidates Western media reports that the Russian army is no longer advancing, or even retreating, in Mariupol), which will make it possible to investigate and try to find evidence of the crimes denounced by numerous testimonies of former prisoners, but also by the former SBU agent, Vasily Prozorov.

Currently 50% of the city of Mariupol is now under the control of the Russian army and the DPR people’s militia, including the Azovstal factory, which shows that the advance is continuing, contrary to what the Ukrainian propaganda and the Western “media” say.

In the newly liberated territories, municipal services are working hard to restore electricity, gas and water supplies. Electricity has been restored to 16 new settlements in the DPR, including Staromarievka, Granitnoye, Novosselovka and Andreyevka, and gas to 11 villages including Pavlopol, Bougas, Novognatovka, Nikolayevka and Donskoye.

In Volnovakha, the DPR also started work on repairing the hospital, which had been used as a firing position by Ukrainian soldiers and destroyed, so that it would be operational again as soon as possible.

The use of civilian infrastructure by Ukrainian soldiers has been documented in places other than Donbass. For example, the Russian army published a video filmed by one of its drones, showing how a Ukrainian multiple rocket launcher firing from Kiev went to refuel in a shopping centre transformed into an ammunition stockpile! A shopping centre that was then destroyed by a Russian missile strike.

Other videos, filmed by civilians, confirm this use of the shopping centre by Ukrainian soldiers (videos that some people reproach civilians for filming, as can be seen below with this screenshot of a post on Telegram where one can read “This is partly why you should not broadcast the movements of our military equipment on social networks”)

Meanwhile, in the Ukrainian media, it seems that journalists and guests of the programmes are having an ignominy contest. So after the journalist Fakhroudine Charafmal, who quoted Adolf Eichmann and said that he was ready to kill Russian children in order to destroy Russia (for which he was not even fired from the TV channel, and merely apologised saying that he had gone too far), we had a Ukrainian “Mengele doctor”, Guennady Drouzenko, who said (on the same TV channel) that he had ordered his doctors in the field hospitals to castrate captured Russian soldiers, because the Russians would not be humans, but cockroaches that must be destroyed (video with English subtitles below)…

After the Russian Investigative Committee launched proceedings against him, the Ukrainian “Dr Mengele” also put his statement down to emotion, and denied that he had given the order to castrate the captured Russian soldiers.

And against a backdrop of Nazi-like statements on Ukrainian TV, the Western media are competing in terms of shameless lies, from Associated Press claiming that there are no more journalists in Marioupol, whereas TF1, Éric Tegnér and I went there with Russian and Italian journalists, and Christopher Miller of RFI, who distorts a statement by the Russian defense ministry to make it appear that the ministry is threatening military tribunals against anyone who does not evacuate Marioupol, whereas the threat is directed at the local authorities who are doing nothing to help the population. 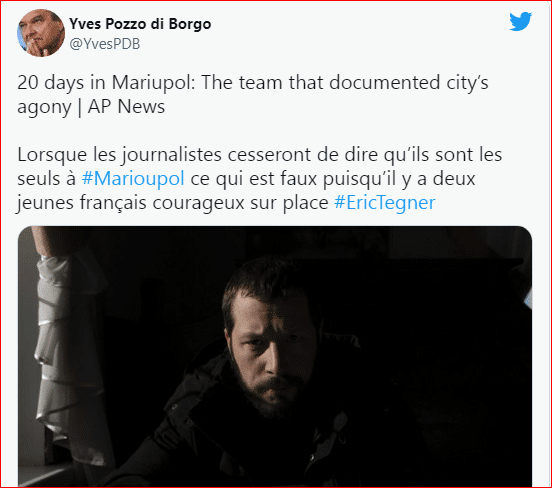 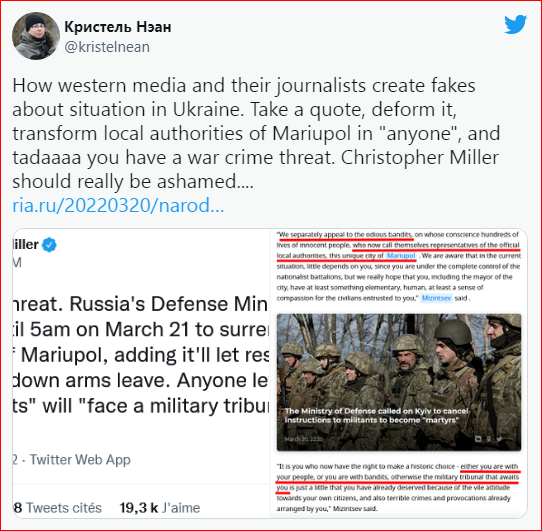 The information war around the Russian military operation in Ukraine is becoming increasingly insane, with the continued publication of false information (including via the hacking of Russian media sites) that must be debunked. It is to be hoped that the battle of Mariupol will end as soon as possible, to put an end to the ordeal of the civilians still held in the city by the fighters of the neo-Nazi Azov regiment.