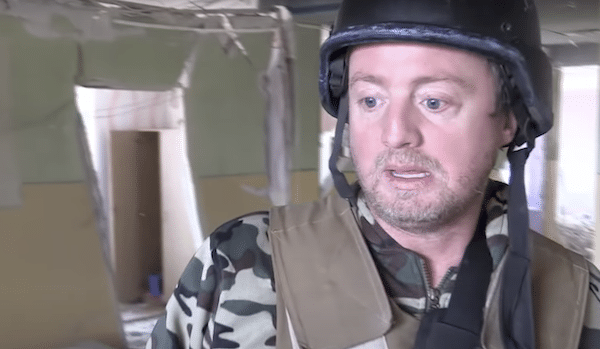 U.S. Navy veteran and independent journalist, Patrick Lancaster, has been making regular reports from Ukraine since the beginning of the crisis.  His reports reveal that what is happening on the ground is not what Western corporate media would have you believe.

“Over the 8 years of the Ukraine War I made more video reports in anti-Ukraine Government (Donetsk People’s Republic) controlled territory than any other western journalist,” he says.

In his report on Friday, Lancaster interviewed residents of the ethnic Greek village of Sartana, one of the villages surrounding Mariupol, Ukraine.

“This is right on, what you could say is the frontline now. Nobody knows exactly where the frontline starts and ends at this point there’s just so much information and [ ] minute by minute the lines are changing,” Lancaster said.

Eight years ago, a referendum was held and “mostly people asked for Russian language. But they decided to Ukrainise us, so that everybody speaks Ukrainian … It was forbidden to speak Russian in the store. There was some tension. Employees paid fines for not saying ‘Good afternoon’ in Ukrainian in stores,” one resident explained.

“Today I’m trying to find guys from Mariupol to find out how things are there. My parents stayed there. But they say that everything is very sad. Today I heard another story that the Ukrainian armed forces started shootings with Azov. Because the Ukrainian forces kind of wanted to give up, SMS messages come that say that ‘you can give up and nothing will happen to you’. So, they want to surrender, and Azov starts shooting at them. And they [Ukrainian forces and Azov] are at war with each other.” another resident said.

Earlier this month members of the Azov Battalion, a self-declared neo-Nazi former paramilitary group that is now a unit of the National Guard of Ukraine, bombed the village most likely aiming for a church.  Village residents also believe it was Azov who bombed the school.

Other interviewees explained that Ukrainians bombed Mariupol to create a panic: “So that people leave, and they use them as a human shield. And now all people are there. And they’re holding them at gunpoint, don’t let them go. Literally shoot them if they run away,” they said.