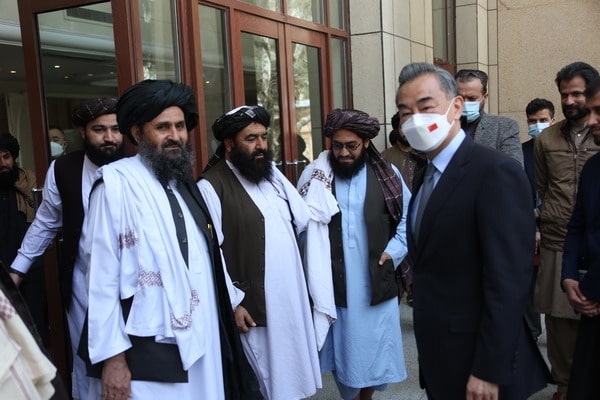 Last Thursday, the Acting Foreign Minister of the Taliban interim government Amir Khan Muttaqi made a stunning remark to greet the visiting Chinese Councilor and Foreign Minister Wang Yi in Kabul when he said, “This is the most important high-level delegation received by Afghanistan.” It spoke volumes about the quiet success of Beijing’s diplomacy to turn the tables in the Hindu Kush.

The body language of the red carpet welcome extended to Wang Yi showed that China has emerged as the most influential external player in Afghanistan by a long shot in the period since the Taliban took power last August. Without doubt, the U.S.’ preoccupations in the European theatre, which seem open-ended, can only work to China’s advantage.

Therefore, there are expectations regarding the Third Meeting of the Foreign Ministers of the Neighbouring Countries of Afghanistan that China is hosting in Tunxi in the eastern Chinese province of Anhui on March 30-31.

The Chinese Foreign Ministry spokesman, while announcing the two-day meeting beginning on Wednesday, put the event in its context saying that the Afghan situation “is now in a critical transition from chaos to order.” Indeed, he qualified this by adding that the country faces “multiple challenges from within and outside that need to be addressed with more support and help.”

The Chinese spokesperson said the meeting hopes to “pool more consensus” from Afghanistan’s neighbouring countries and to discuss “ways to jointly stabilise the situation.” Thus, the neighbouring countries’ forum will engage the Afghan Acting Foreign Minister Amir Khan Muttaqi in a formal “Dialogue” format where he will interact with the participants of the event in Tunxi—foreign ministers of China, Pakistan, Iran, Turkmenistan, Uzbekistan, Kyrgyzstan and Russia—as regards the country’s “difficulties and needs.”

Interestingly, the Chinese spokesman specifically confirmed that Russian Foreign Minister Sergey Lavrov will attend the meeting in Tunxi “upon invitation.” This is important against the backdrop of the U.S.-Russia confrontation and the West’s concerted attempts in the recent months to entice the Taliban regime into the western orbit through a mix of alluring offers and bullying.

Neither Russia nor China wants Afghanistan to become a turf of the great game, but that said, they also cannot be passive towards the reinstallation of the NATO intelligence apparatus so close to their borders at the emergent regional security scenario.

It is improbable that tomorrow’s meeting will lead to the recognition of the Taliban government. However, beneath that threshold, an intensification of the regional states’ engagement with the Taliban regime can be expected.

Wang Yi’s visit to Kabul coincided with the arrival of a high-level Russian delegation in the Afghan capital led by the presidential envoy on Afghanistan Zamir Kabulov, which included representatives of various agencies of the government, especially the economic ministries. Conceivably, Russia is drawing up a roadmap for stepping up security-cum-economic cooperation with the Taliban’s interim government. The internal situation in Afghanistan is stabilising and the prospects of any organised resistance to the Taliban have receded significantly.

Both Russia and China are gearing up for the deepening of their economic cooperation with Kabul. It is entirely conceivable that they may take recourse to innovative payment mechanisms to sidestep the tyranny of the U.S. dollar (“world currency”), thereby undercutting Washington’s capacity to keep the Taliban regime on a tight leash financially through bullying and blackmail until it proved pliable to the Western diktat.

During Wang Yi’s visit to Kabul, both the Acting Deputy Prime Minister Mullah Abdul Ghani Baradar and Muttaqi himself emphatically stated their interest in expanding the cooperation with China within the ambit of the Belt and Road Initiative (BRI). Wang Yi has proposed that China is “ready to make efforts to extend” the China-Pakistan Economic Corridor to Afghanistan and help the country develop as “a bridge for regional connectivity.”

Basically, both Beijing and Moscow have reason to be satisfied with the Afghan interim government’s performance so far, which suggests that the Taliban leadership’s commitment to the peaceful reconstruction of the country is not to be doubted. Wang Yi, in fact, went to the extent of complimenting the Taliban regime for its “series of positive measures to respond to the concerns of the international community.” Wang Yi told Muttaqi,

We oppose the political pressure and economic sanctions on Afghanistan imposed by non-regional forces at every turn.

Of course, the clincher will be the Taliban regime’s performance on the security front. Baradar pledged that Kabul will not allow any forces to engage in activities that undermine China.” He just stopped short of mentioning the shenanigans by the western intelligence. Specifically, Baradar underscored the importance that the Taliban leadership attaches to China’s security concerns.

He said Kabul “will take concrete and strong measures to achieve security across Afghanistan and contribute to maintaining regional security.” Importantly, Baradar sought China’s help in enhancing Afghanistan’s “security capacity.” Wang Yi took the opportunity to convey Beijing’s expectation that Kabul will “earnestly fulfil its commitment to resolutely crack down on all terrorist forces, including the East Turkestan Islamic Movement.”

With the U.S. and the European Union hopelessly bogged down in their confrontation with Russia, the situation surrounding Afghanistan is radically transforming. The Taliban leadership is savvy enough to sense this. To be sure, there is no stopping the BRI projects in Afghanistan in this changed situation.