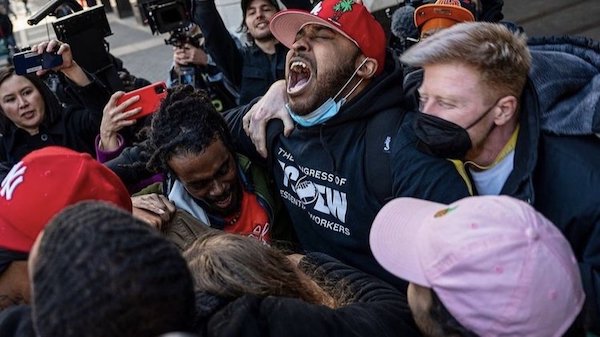 The newly formed Amazon Labor Union (ALU) won by more than 500 votes, with 2654 workers voting in favour of a union and 2131 voting against, according to the National Labor Relations Board (NLRB) count. About 7000 people are employed at the site, known as the JFK8 Fulfillment Center.

After processing any objections lodged by the parties, the vote is expected to be certified later this month. Once it is, JFK8 will become the one and only Amazon warehouse to unionise out of 110 across the United States.

Amazon is the second-largest employer in the U.S., after Walmart, with more than 1.1 million employees.

The workers will join the independent ALU, co-founded by Christian Smalls, a 33-year-old African American who was sacked from his job at Amazon in March 2020, and 33-year-old African American JFK8 worker Derrick Palmer. The union operates on a shoestring budget, raised money through crowd-funding, received free legal help and rallied workers to vote on TikTok, at bus stops and during picnics and pizza parties.

We want to thank Jeff Bezos for going up to space, because while he was up there, we were organising a union.

“We went for the jugular, and we went after the top dog. We’re going to unionise. We’re not going to quit our jobs anymore,” Smalls told The City on April 1, adding that Amazon executives “are going to have to bargain with their workers now”.

Workers at an Amazon shipping centre in Staten Island will also vote on unionisation later this month.

Smalls founded the ALU because he was convinced it was the best approach in the wake of the failed unionisation campaign at Amazon in Bessemer, Alabama. The Retail, Wholesale and Department Store Union (RWDSU) led that drive early last year.

Many union officials and experts said it was a long shot, considering that Smalls and his team had little organising experience or expertise and were going up against a fiercely anti-union colossus with U.S.$386 billion in annual revenues.

New York is a union town. The bus drivers, the sanitation workers, the police, the firefighters, they’re all unionised. Everybody is related or knows somebody in a union.

After the ALU’s victory, the newly-elected reform president of the Teamsters, which represents most unionised drivers and warehouse workers in the country, announced plans to significantly increase organising efforts at Amazon facilities.

Smalls told the media last year that he had learned from the RWDSU’s loss in Alabama. “The fact that we’ve seen what Amazon does gives us an advantage,” he said.

And we learned from the union’s missed opportunities. We’re not going to make their mistakes.

Smalls promised to have a bigger, stronger workers’ committee to educate and mobilise workers in support of unionisation.

If established unions had been effective, they would have unionised Amazon already. We have to think about 21st century-style unionising. It’s how do we build up the workers’ solidarity. Established unions don’t really know Amazon and what it is to work at Amazon.

But they found organisers from the retail union–the one that had previously declared an interest in JFK8–less than welcoming to them and thought the professionals seemed like outsiders who had descended on the community.

According to media reports, Smalls was sacked from Amazon after leading a walk out over the lack of COVID-19 safety measures. The company’s lawyers mapped out a plan–in a meeting Jeff Bezos attended–to smear Smalls as “not smart or articulate” and to make him “the face of the entire union/organizing movement.”

“They said they’d make me the whole face of the union effort against Amazon,” Smalls told The Guardian last June.

I’m trying to make them eat their words.

Smalls told The Guardian the company lawyers’ strategy was “definitely racist”. The lawyer claimed he didn’t know Smalls was Black, but Smalls didn’t buy it.

Amazon initially gave these “essential” workers a “bonus” $2 an hour in 2020, then later took it away even as COVID-19 spread.

Most of the people involved with the Amazon Labor Union have lots of experience at Amazon and know what Amazon workers want.

The ALU’s campaign began in April last year. Activists set up a tent outside the Staten Island Amazon warehouse next to a bus stop, with a sign saying: “Sign your [union ballot] authorisation cards here.”

Under U.S. labour laws, the union needed at least 30% of the workforce (1700 signatures) to hold a ballot.

It is unusual to file for a ballot with less than 50% signed cards. However, Smalls and Parker knew many workers were afraid to sign even though they supported unionisation.

Established unions rarely consider calling for a unionisation ballot without 70% support, expecting that many workers who initially sign will stand down in the face of anti-union pressure by the employer.

Smalls told The Guardian he was first hired by Amazon in 2015. He performed so well that the company transferred him to the Staten Island warehouse to train workers when it opened in 2018.

He enjoyed working for the company at first, but over the years realised it had some “deep systemic issues”, including an injury rate that was “too high”. Smalls also saw discrimination against older workers, mistreatment of women workers and saw that workers were sacked when they faced family emergencies but had run out of leave. He also experienced racial discrimination:

I applied to be a manager 49 times and never got it.

Having a union on the job would help on all these matters, said Smalls.

Even though some labour experts and union bureaucrats didn’t give the new union much hope of winning, Amazon certainly took Smalls and the ALU unionisation campaign seriously.

Amazon tells its workers they don’t need a union–or the burden of paying union dues.

But, as Smalls told The Guardian:

Why an independent union

Palmer told The City on April 1 that the ALU used whatever means it could to reach workers in the lead up to the ballot, and emphasised an approach where Amazon workers organised others.

“You have to have a different approach,” he said.

You have to do something innovative, and I feel like the barbecues resonated, the t-shirts resonated, the fact that we stood up during the [company’s] captive audience meetings resonated because that hasn’t really been done like that.

We had to show the workers that we got a lot of fight in us and that we’re not gonna back down.

While many Democrats and “progressive” elected officials cheered the union’s victory, Smalls said in a TV interview that none of them actively backed their effort, but then congratulated them for their success.

The idea of rank-and-file workers, not affiliated with a major union, was seen as an impossible task. That’s why most mainstream labour activists stayed on the sidelines in the organising period. But in the final weeks before the voting a few New York area unions did give some on-the-ground help.

It’s never too late to get on board. But damn, like you know, it’s been almost a year without that support. But we’ve forgiven that as well. That’s why I told my team, ‘It doesn’t matter who’s here or who’s coming. We’ve got to organize who’s around us’ and that’s what we’ve based this campaign off of and it paid off for us.

When the ballot results came through on April 1, the ALU activists gathered outside the NLRB couldn’t believe they had won.

“I can’t explain it,” Smalls told The City.

This is literally 11 months in the making. This moment, it hasn’t really soaked in yet. I’m trying to stay calm, but I know we poured in a lot of hard work, blood, sweat and tears into this. I’m so happy to even still be doing this two years later.

From the start of the ballot count, the ALU pulled ahead of the “no” vote. Over the first five hours, as ballot boxes were emptied, it became clear the union was headed for victory, Palmer told The City.

They had to accept it.

But Amazon isn’t conceding just yet. The company plans on filing objections “based on the inappropriate and undue influence by the NLRB that we and others (including the National Retail Federation and U.S. Chamber of Commerce) witnessed in this election”.

Regardless, the NLRB is expected to certify the election.

The ALU has its sights set beyond Staten Island. Smalls told The City that Amazon workers around the country have already contacted the union for help.

“We want to be able to help them now that we have the union to do so. Hopefully, resources come behind that and then hopefully we’ll be able to give resources out,” said Smalls.

Palmer wants to start organising workers at his old warehouse in New Jersey, where he first started working for Amazon.

While at first sight this fight appears to be a “David and Goliath” story, in fact it shows the power of rank-and-file workers–on a starting pay of $18 an hour–when they are united against a powerful employer like Amazon. Workers united can win.

Amazon spent millions to pressure their workers in Staten Island and Alabama to vote against unionising during compulsory “captive audience” meetings. In contrast, the ALU had a budget of just over $100,000.

The next stage, maybe the hardest part in the class conflict, comes next in negotiating the first contract. The ALU is confident.

The energy and determination is clearly on the side of the workers.