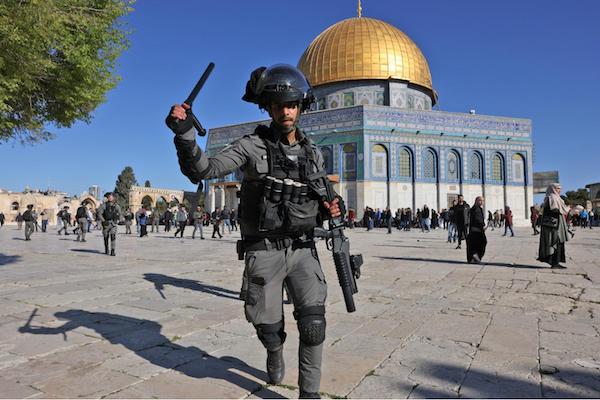 A member of the Israeli security forces attacks worshippers at the Dome of the Rock mosque during clashes at Jerusalem’s al-Aqsa Mosque compound, on 15 April 2022 (AFP)

The Israeli Jewish colonial fundamentalist group “The Returning to the Mount,” which advocates the construction of a “Third Jewish temple” in al-Haram al-Sharif, the third-holiest place in Islam, and is associated with the racist Kach group, announced this week that it plans to sacrifice animals as part of the Jewish Passover rituals on Friday in al-Haram.

In response, Hamas declared that it will not allow such rituals to take place and will prevent them “at any cost”. The Palestinian Authority and the Jordanian government also condemned the plans. Last February, the group, pretending to be Muslims, entered al-Haram al-Sharif and prayed there.

In view of the announcement of the animal sacrifices, the Jordanian-appointed director of the mosque issued a decision banning Muslim worshippers from remaining in isolation in the mosque, a common devotional practice for Muslim worshippers during Ramadan, until the last 10 days of Ramadan, that is, after the end of the passover.

Still, Palestinian worshippers insisted on remaining in the mosque last night to prevent the extremist group from entering al-Haram and were attacked this morning by Israeli security who injured more than one hundred worshippers.

After the 1967 conquest of East Jerusalem by the Israelis, Israel‘s then defence minister, Moshe Dayan, decided to allow the Palestinian-turned-Jordanian Waqf (religious endowment), which always administered al-Haram al-Sharif, or what Jews call “The Temple Mount,” to continue to administer it.

Israel’s Ashkenazi and Sephardi chief rabbis, along with hundreds of other rabbis, issued a Halachic ruling that it was forbidden for Jews to enter the area, let alone pray there, as that would be in violation of Jewish religious law, or Halacha, on account of the “impurity” of all Jews after the destruction of the Second Temple.

Even the fundamentalist rabbis, disciples of the zealot Rabbi Zvi Yehuda Kook, many of whose followers became religious settlers in the West Bank and East Jerusalem after 1967, agreed with the religious prohibition.

Nonetheless, some of the extreme non-religious Zionist groups, especially those associated with the pre-state terrorist group Lehi, argued that the rabbis were wrong and that Jews should build a synagogue there. In 1969, an Australian Christian fundamentalist set fire to al-Aqsa Mosque and was arrested by the Israelis, alleged to be mentally ill, and deported years later.

It would be Shlomo Goren, the rabbi of the Israeli army, however, who in 1973 would become Israel’s chief Ashkenazi rabbi and who would weigh in more heavily on the matter. Goren argued that Jews could visit and pray in the areas of the ancient temple that had been expanded at the end of the Second Temple period, and that this would not be in violation of Halacha.

He argued that there was evidence that Jews had built a permanent prayer site on the “Mount” until the 16thcentury, a claim that historians contest.

In his zeal to allow Jews access to the Muslim shrines, Goren correctly claimed that the Western Wall had not been a Jewish prayer site until the 17th century and even then on account of Ottoman restrictions on Jewish worship elsewhere in al-Haram al-Sharif area.

In 1994, Goren wrote to prime minister Yitzhak Rabin that “we cannot claim rights at the Western Wall,” and that Jews should be allowed to pray all over the “Temple Mount” area.

Israel’s chief rabbis in the 1980s began to find the idea partially acceptable, and both its Sephardi and Ashkenazi chief rabbis proposed building a synagogue in the southeastern corner of the area, behind al-Aqsa Mosque, meaning outside al-Haram area, though the Sephardi rabbi insisted that the synagogue should be higher than the mosque.

Indeed, the Buraq Wall itself, or what is known in English as “the Western Wall,” let alone al-Haram al-Sharif, had never had a central religious importance as a prayer site for the Jews before the advent of Zionism.

While Palestinian Jews were allowed to pray there during Ottoman times, it was Zionist colonists and zealots who began to lay claim to the Wall, which instigated a number of violent confrontations with Palestinian Muslims in the 1920s, culminating in the 1929 violence that engulfed the country, which Palestinians refer to as “the Buraq Revolt,” and in which more than 200 Jews and Palestinians were killed.

In 1986, 70 rabbis convened by Goren issued a new injunction that permitted Jews to “enter and pray on the Temple Mount in most of its area,” and that a synagogue could indeed be built there.

By 1990, the Lubavitcher rabbi Menachem Schneersohn instructed his followers to hold celebrations in  al-Haram, while in the meantime, the “Temple Mount Faithful,” established in 1967 and led by one Gershon Salomon, were planning to lay the cornerstone for building the “Third Temple” on the grounds of al-Haram al-Sharif.

Salomon is an Israeli nationalist and was not religious at the time, although he seems to have become so by the mid 1990s, as reflected by his movement’s increasing religious-nationalist literature and its connections and financial ties to Christian fundamentalist groups.

Palestinians demonstrated against the plans of the Temple Mount Faithful. On 8 October, Israeli forces killed more than 20 Palestinian protesters and injured more than 150, which led to two UN resolutions that condemned the Israeli government’s use of force and its refusal to allow the UN secretary-general to visit al-Haram al-Sharif.

Suffice it to say that the massacre and the ensuing international uproar aborted Rabbi Schneersohn’s plans.

An even more radical Zionist group laying claim to an alleged Jewish “right” to occupy and pray in al-Haram al-Sharif is the Hai Ve-Kayam movement led by Yehuda Etzion, whose father was a member of the Terrorist Lehi group. Etzion spent seven years in Israeli jails for his membership of a Jewish terror group in the 1980s that sought to blow up the Dome of the Rock. 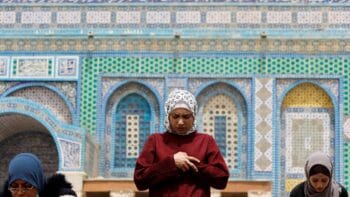 Eztion and his group would insist on praying in al-Haram, which forced the Israeli police to remove them, images of which galvanized more support for the movement in Israel’s colonial Jewish society whether religious or secular.

Other groups making similar claims include “Yemin Israel,” “Kach” and “Kahane Hai,” the “Temple Institute,” the “Movement to Establish the Temple,” and “Ateret Kohanim” among others.

Many of these groups were mobilised after the Oslo Accords for fear that the Palestinian Authority might be granted authority over al-Haram, and especially after the Israel-Jordan Peace Accords in 1994 in which Israel “respects” Jordan’s “special role… in the Muslim Holy shrines in Jerusalem”.

In February 1997, the Committee of Yesha Rabbis, a central component within the Zionist religious-nationalist colonial-settler movement, issued a ruling permitting rabbis who believe that Jews should pray in the Haram to do so.

In the meantime, many Israeli Supreme Court judges and politicians began to call on the government and the chief rabbinate to lift the prohibition on Jewish prayer in al-Haram. These efforts culminated in the visit staged by the leader of the Likud Party, Ariel Sharon, to al-Haram al-Sharif in September 2000 accompanied by Israel’s riot police.

Before 2003, the Israeli government began to allow no more than three religious Jews to visit al-Haram at a time, but since then has steadily increased that number to more than 50, and does so without the approval of the Islamic Waqf authorities.

By 2009, after making racist remarks about Palestinians, Israel’s Internal Security Minister Yitzhak Aharonvitch of the right-wing Yisrael Beitenu party paid yet another visit to al-Haram. More Zionist provocations and desecrations continued. In September 2015, the Israeli government prevented Palestinians from entering  al-Haram to make way for Jews to go and pray there.

A Palestinian uprising ensued in which Israeli police shot scores of Palestinians. Whereas the Israeli government banned members of the Knesset from visiting al-Haram following the uprising, Benjamin Netanyahu lifted the ban in 2018.

In fact, the issue of whether Jews are Halachically allowed to enter let alone pray at al-Haram al-Sharif remains a major point of contention in Jewish religious circles in Israel, so much so that last year Netanyahu was rumoured to have concluded a deal with a conservative rabbi and head of a political party to temporarily bar Jews from entering al-Haram in exchange for joining his coalition government.

The ongoing Palestinian resistance against Israeli colonialism of the past few weeks, whether in Israel or in the West Bank and Gaza, has reached a fever pitch, with Israeli killings of Palestinians across the West Bank, especially in Jenin.

While Palestinians realise that settler-colonialism has targeted and continues to target the entire land of the Palestinians, the ongoing attempts to take over Palestinian Muslim holy places, whether in Jerusalem, Hebron, or in Nablus’ Maqam Yusuf al-Dwayk, a local saint, or what Zionist zealots allege is the biblical “Joseph’s Tomb,” continue apace, as does valiant Palestinian resistance to them.

While the Israelis had been corralling their supporters among Arab leaders in the last month, whether the Jordanian government to pressure the Palestinian Authority to repress any possible uprising during the current Holy month of Ramadan, or the Egyptian government to warn Hamas not to engage Israel as it represses West Bank and East Jerusalem Palestinians, the next couple of weeks may see such schemes falter.

Palestinian resistance and uprisings against the settler-colony have not ceased since the first arrival of Jewish colonists in the 1880s. Israel can call upon whatever Arab leaders it wants to help it quell Palestinian protest, but there is no reason to believe that the Palestinians will ever stop resisting as long as Zionist settler-colonialism remains.

Joseph Massad is professor of modern Arab politics and intellectual history at Columbia University, New York. He is the author of many books and academic and journalistic articles. His books include Colonial Effects: The Making of National Identity in Jordan; Desiring Arabs; The Persistence of the Palestinian Question: Essays on Zionism and the Palestinians, and most recently Islam in Liberalism. His books and articles have been translated into a dozen languages.