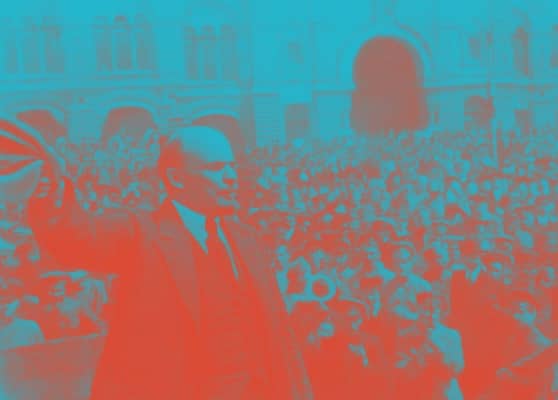 The outbreak of World War I ushered in a new age of barbarism in Europe. It also triggered the collapse of the Second International, the international league of socialist parties that purported to be staunch opponents of war, but which lined up behind their own ruling classes when it broke out. Lenin’s pamphlet Imperialism: The Highest Stage of Capitalism, published in the middle of the horror and brutality of the Great War, aimed to answer two questions: why this imperialist war, and why the collapse of the Second International?

Every nation involved in the war had a ready explanation for it, of course. Each accused its enemy of provocations and blood lust. Even the socialist parties took up some of these themes. In Imperialism, Lenin identified capitalism as the culprit. War was the product of the anarchic and competitive character of the capitalist world order.

Lenin wrote that “If it were necessary to give the briefest possible definition of imperialism, we should have to say that imperialism is the monopoly stage of capitalism”.

What were the characteristics of “monopoly capitalism”? First, the tremendous concentration of industry into fewer and fewer hands. In the mid-nineteenth century, what Lenin called “free market capitalism” had predominated. By the turn of the twentieth century, successive periods of economic boom and bust had led to waves of takeovers and bankruptcies that allowed the strong to destroy the weak. The victorious companies, on their own or organised into trusts or cartels, now dominated entire national markets.

Second, monopoly capitalism was characterised by an enormous growth in the significance of banks, from mere intermediaries lending money to firms expanding their operations, to overseers of the advanced economies. By fuelling credit growth and liquidating bankrupt businesses, the banks contributed to the process of concentration of capital, the growth of bigger and bigger monopolies.

As finance capital grew more powerful, so it became more concentrated in a small number of countries. By 1910, four countries—Britain, the U.S., France and Germany—accounted for 80 percent of the world’s financial securities (loans, bonds, shares etc). Lenin wrote: “In one way or another, nearly the whole of the rest of the world is more or less the debtor to and tributary of these international banker countries, these ‘four pillars’ of world finance capital”.

The big creditor nations amassed a huge surplus of capital that could not be profitably invested at home. They invested it instead in colonies and less developed countries where the rate of return was higher because capital was scarce, the price of land was low, wages were low and raw materials were cheap.

The biggest monopolies boosted their profits by organising market-sharing schemes to minimise competition and jack up prices. Such arrangements could not last, however. Inevitable disturbances in the balance of power resulting from differential rates of economic development, wars and crises led to constant battles for hegemony between the big companies, with governments weighing in to boost the fortunes of “their” monopoly capitalists. The outcome was new spheres of influence.

This jockeying for control over international markets and raw materials between the rival powers drove the partitioning of Africa and Asia. By the close of the nineteenth century, this rivalry between various finance capitals backed by their states had led to the seizure of all those territories not occupied by one or another of the big powers. From this point on, one great power could advance its sphere of influence only by seizing territory from another.

Imperialism was not, therefore, a “policy” adopted by governments but arose out of tendencies that were inherent in capitalism. In Imperialism, Lenin poured scorn on Karl Kautsky, the leading theorist of the Social Democratic Party of Germany, who had provided political cover for the party’s betrayal when it voted in 1914 for war credits in the German parliament. Kautsky argued that there was nothing inevitable about imperialism. It was only a “policy” of annexation preferred by finance capital and the arms industry and could be combated by another capitalist policy that did not involve annexation of territory and which would be advantageous for other sections of capital. Further, Kautsky argued, as blocs of finance capital came to dominate ever larger parts of the world, they might eventually unite in the form of “ultra imperialism”, what he called the “joint exploitation of the world by internationally united finance capital”. The big powers would no longer need to go to war to settle disputes.

Lenin took apart Kautsky’s “ultra imperialism”, for both its logical flaws and its political implications. The international cartels that Kautsky believed could be the basis for a peaceful division of the world were only an example of the division and constant re-division of the world. Specifically, the old imperial powers Britain and France controlled vast swathes of Africa and Asia; Germany, by contrast, had very few colonies. But Germany was the far more dynamic industrial power by the early twentieth century; it was inconceivable it would be content with its exclusion from large areas of the world. There could, therefore, be no “internationally united finance capital” sharing out the spoils of colonialism.

This very dynamism of the world system meant that periods of peace could only give way to periods of war. How else could Germany break into markets currently dominated by Britain and France? Or, for that matter, the U.S. and Japan, two other latecomers to colonialism? Only force would allow them to build the kind of empires befitting their economic weight. That meant that alliances were constantly torn apart by internal tensions, the outcome of which would be decided in the ultimate instance by force. As Lenin put it, “Peaceful alliances prepared the ground for wars and in their turn grew out of wars; the one conditions the other, producing alternating forms of peaceful and non-peaceful struggles”.

By appealing to the capitalists to come together to share markets peacefully, Kautsky was only trying to prettify capitalism. Monopoly capitalism, far from paving the way for peace, just heightened political reaction at home and national oppression abroad. Kautsky, Lenin argued, was only giving cover to those in his party who said that capitalism did not need to be overthrown. Kautsky must be condemned for “obscuring and glossing over the fundamental contradictions of imperialism” and, as a result, muddying the process of clarification in the workers’ movement between revolutionary and reformist politics.

Lenin believed that the emergence of monopoly capitalism helped explain the material basis for the Second International’s capitulation in 1914. Monopoly profits earned from investments in the colonies allowed the capitalists to “bribe the upper strata of the proletariat”. This bribe was the material basis for reformism, the adaptation by the workers’ movement to its own ruling class, and explained why the workers’ parties of Europe supported their “own” ruling classes at the outbreak of World War I. Revolutionaries must do battle with these traitors in the labour movement and drive them out.

Lenin’s pamphlet soon became a canonical text in the international revolutionary movement. Although only, as Lenin stated, a “popular outline” of theories that had been developed earlier by the English liberal John Hobson, the German socialist Rudolf Hilferding and Lenin’s own comrade Nikolai Bukharin, the Bolsheviks’ triumph in the October Revolution and the subsequent formation of the Communist International meant that Lenin’s work was by far the best known.

Imperialism has tremendous strengths. In the midst of the carnage on the battlefields and misery on the home front, Lenin pointed out that capitalism was squarely to blame for the horrors unfolding across Europe. Capitalism could not exist without war. It therefore had to be overthrown not just to end this war but also to prevent future wars. For those fighting colonialism, Imperialism gave some theoretical underpinning to their struggles. They faced not just a particularly bloody government in London, Paris or Berlin, but a whole system of colonial oppression fuelled by capitalism. This was the basis for the formation of the Communist International in 1919—to bring together revolutionaries all over the world for a joint struggle to smash capitalism. Imperialism also pointed to the complicity of socialists like Kautsky who said that they were against war but who made excuses for the system that kept generating wars.

Imperialism had tremendous predictive value. Lenin argued that unless capitalism was destroyed, any peace agreement between the imperialist powers to end the Great War would only give way to more wars in the future. And that is exactly what happened. Just two decades after the 1918 armistice, the world was plunged into a new world war that proved even bloodier and which was genuinely a world war, with whole areas of the Asia-Pacific drawn into the fighting. And, today, Imperialism helps us understand the new military tensions between the U.S. and China and now Russia, each trying to carve out or defend their spheres of influence.

There are weaknesses with Imperialism. Its reliance on the “labour aristocracy” to explain working class reformism did not stand up to scrutiny even in Lenin’s day, and has little relevance in a world where the working class even in the imperialist countries is being constantly squeezed like it is today. The emphasis on the banks, capital export and the colonies again did not entirely fit the picture in all the main imperialist powers at the time—capital export, for example, was a big factor only briefly for Britain and nowhere else. And over the course of the 20th century, the imperial powers got rid of their colonies, driven out forcefully or otherwise, and did not collapse as imperial powers. The world’s biggest imperialist power, the U.S., is actually a debtor nation, not a creditor. And so on. But the basic argument, that the competitive and anarchic nature of capitalism constantly drags the world into wars and will do so until it is overthrown, still stands up. As in Lenin’s day, the duty of revolutionaries, and all those who want to see an end to bloody imperialist wars, is to overthrow capitalism.