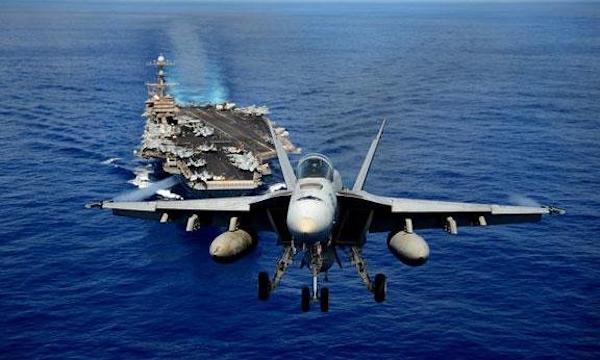 Two documents published by the U.S. government in the past two months spell it out loud and clear: the U.S. is on the warpath against emerging big power rivals China and Russia.

The National Security Strategy and National Defense Strategy, released in December and January respectively, reflect the U.S. ruling class’ understanding that its domination of the world, virtually unchallenged since the fall of the Soviet Union, is now at risk, and its determination to counter that slippage by directing the resources of the U.S. economy into a program of crash rearmament.

“The central challenge to U.S. prosperity and security is the re-emergence of long term, strategic competition”, the Pentagon’s National Defense Strategy states. “It is increasingly clear that China and Russia want to shape a world consistent with their authoritarian model – gaining veto authority over other nations’ economic, diplomatic and security decisions.”

Great power rivalry is back; terrorism has now been relegated to second place in the hierarchy of U.S. national security concerns.

The two documents start from a common understanding – that U.S. imperialism has lost its edge over its rivals in the past two decades. Four rivals are identified: two “rogue regimes”, Iran and Syria, and two “revisionist powers”, Russia and China.

The “war on terror” agenda that underpinned U.S. strategy in the first decade of the 21st century has failed. The U.S. has been embroiled in conflicts in the Middle East for more than 15 years and has nothing to show for it. In Iraq, the U.S. has spent hundreds of billions of dollars on the invasion and occupation only to be supplanted by Iran as kingmaker. In Afghanistan, U.S. writ is no closer to ruling, and the Taliban is no closer to being wiped out.

The U.S. was left flat-footed during the Arab revolutions of 2011. While it has intervened to help snuff out those brief months of freedom, it has advanced nowhere.

Iran, described by the Defense Strategy as “the most significant challenge to Middle East stability”, has grown more powerful, not just in Iraq but in Syria and Lebanon too. Saudi Arabia and Israel, longstanding allies, have pursued a more independent course of action, openly flouting the U.S. at times.

And now in Syria, the U.S. is trying to secure its position in the north of the country, where its allies, the Kurds, are fighting with US-supplied weapons against an invasion by Turkey, also armed by the U.S. and a NATO ally, which aims to wipe out Kurdish control.

The Syrian conflagration has allowed not only Iran to expand its regional power, but Russia too. Russian intervention helped to turn the tide against the revolution in 2015. Russia has demonstrated that the years of retreat are over. It maintains parity in nuclear weapons with the US, and its armed forces have extensive combat experience.

Russia thumbed its nose at the U.S. in Georgia in 2008 and, more recently, in Ukraine and Crimea. The Defense Strategy regards what it calls such “grey zone” conflicts, in which U.S. rivals exercise their muscle without provoking all-out war, as sapping U.S. world hegemony.

Years of sanctions and constant U.S. demands for regime change in Pyongyang have convinced the North Korean leadership that nuclear weapons are its only safeguard, and it is now developing missiles capable of reaching not just key U.S. allies, Japan and South Korea, but the U.S. mainland. This upends decades of military planning by the U.S. in north-east Asia.

The conflict with North Korea is just one element of the larger regional battle with China, whose rise to regional and soon world power status is keeping the Pentagon awake at night. The Defense Strategy states:

“China is leveraging military modernization, influence operations and predatory economics to coerce neighbouring countries to reorder the Indo-Pacific region to their advantage … displacing the United States to achieve global pre-eminence in the future.”

Dealing with this threat is now the primary goal of U.S. defence strategy.

The threats to U.S. hegemony are not just military. To build and sustain the biggest military arsenal in the world, the U.S. needs a powerful economy. Here, too, it is losing its edge. In 2000, the country accounted for 31 percent of world GDP; today the figure is 24 percent.

China has surged, its share rising from 4 percent to 15 percent. The Chinese ruling class is now attempting to leverage its booming economy into geo-strategic power through its Belt and Road initiative which, by some measures, will be seven times larger than the Marshall Plan used by the United States to secure its domination over Western Europe in the aftermath of World War Two.

“Today, we are emerging from a period of strategic atrophy, aware that our competitive military advantage has been eroding”, the Defense Strategy argues. Dominant strategies towards the “revisionist powers” have not reined them in. The Security Strategy likewise states:

“These competitions [with China and Russia] require the United States to rethink the policies of the past two decades – policies based on the assumption that engagement with rivals and their inclusion in international institutions and global commerce would turn them into benign actors and trustworthy partners. For the most part, this premise turned out to be false.”

The solution: a vast expansion of U.S. war-making capacity.

The documents are thick with references to protecting the American people and passing to the next generation “those freedoms we enjoy today”. But they have nothing to do with protection or freedom, only aggression and authoritarianism.

Climate change, once listed as a threat to the world order, has vanished. In its place is “embracing energy dominance”. The Security Strategy doesn’t once mention the most significant threats to the wellbeing of the U.S. people – widely prevalent non-communicable diseases and the lack of adequate and affordable health care.

While proclaiming their desire to combat aggression, the Trump administration and Pentagon can barely disguise that the U.S. has long been the most aggressive power in the world. As the Defense Strategy states: “Achieving peace through strength requires the Joint Force to deter conflict through preparedness for war”.

US military expenditure accounts for 36 percent of the world’s total, and in the years since 9/11 the U.S. has rapidly expanded its military capabilities. But it’s not enough. The Pentagon is crying poor, claiming that the armed forces have been left to wither for lack of money.

At the centre of U.S. rearmament plans is upgrading the country’s nuclear arsenal. In the State of the Union address on 31 January, Trump announced his determination to “modernise and rebuild our nuclear arsenal” to build “unmatched power” as “the surest means to our true and great defence”. On top of more ballistic missiles and bombs, the Pentagon has a long shopping list of new weapons systems.

It is important to emphasise that these documents are not the work of a recklessly belligerent madman. Trump had little hand in compiling either of them. One Atlantic magazine commentator even suggested, “The National Security Strategy is a stunning repudiation of Trump”.

The most obvious point of differentiation concerns relations with Russia. The two documents foreground strategic competition with the country, but Trump repeatedly over the last two years has said that he would like to get along with Vladimir Putin.

The documents reflect the considered thinking of the U.S. military and security establishment in the face of U.S. relative decline. They are little different from the strategy documents a Clinton administration would have published: the logic of U.S. imperialism in the emerging world order pushes it toward hyper-militarism.

Trump’s economic nationalism has been to the fore in recent months. In the president’s view, U.S. willingness to oversee world trade, commerce and governance via institutions such as the IMF, World Bank, WTO and the United Nations allowed its rivals, China in particular, to rise at its expense. Trump argues that the U.S. has been ripped off by its trading partners, China and Germany in particular, which have piled up huge trade surpluses.

“Making America Great Again” involves downgrading U.S. support for the international liberal order, for example by sabotaging the operations of the World Trade Organisation, cutting funding to the United Nations, withdrawing from the Trans Pacific Partnership (TPP) and the Paris climate accord and renegotiating NAFTA.

The Security Strategy states that “the United States will no longer turn a blind eye to violations, cheating or economic aggression” by its trading partners. In January, the president announced new tariffs on imports of washing machines and solar panels at the request of domestic producers.

But Trump’s “America First” economic agenda butts up against the interests of important sections of U.S. capital and the foreign policy establishment that, far from wanting to rip up the international liberal order, seek to preserve it as much as possible.

Big business has far too much invested in international supply chains to withdraw from them now. Wall Street and State Department establishments were shocked by Trump’s decision to withdraw from the TPP, understanding the opportunity it gave to China to pose as the economic linchpin of the Asia Pacific at U.S. expense. There is a big lobbying effort under way now to prevent the Trump administration also destroying NAFTA.

But much unites big business and the Trump administration. Besides the huge tax cuts passed before Christmas, there are Trump’s promises to increase spending on private-public infrastructure projects, a huge handout to business but also an important element in military preparedness.

And Silicon Valley will be cheering the commitment to what the Security Strategy calls the “national security innovation base” – the companies and research institutions that provide the information technology that guides and powers U.S. weapons systems.

The U.S. government is restricting Chinese investors from buying into U.S. technology companies and trying to halt the Chinese government’s practice of demanding U.S. companies operating in China hand over their valuable intellectual property.

Of particular concern to both Trump and the Pentagon is that U.S. military capability has been undermined by the run-down in U.S. manufacturing capacity since the 1980s. The administration will likely soon slap tariffs on Chinese steel on national security grounds: the U.S. wants to make sure that it can produce the steel for the big new orders coming through for missiles, bombers and ships.

The U.S. rearmament program and its planned infrastructure rebuilding will cost trillions of dollars over the next decade. The Pentagon is demanding that Congress pass new appropriations for the military. Failure to do so, the Pentagon asserts in its Defense Strategy, will cost U.S. imperialism dearly, resulting in “decreasing U.S. global influence, eroding cohesion among allies and partners, and reduced access to markets that will contribute to a decline in our prosperity and standard of living”.

The demands for more military spending come when government revenues are set to be hit hard by Trump’s corporate and personal income tax cuts. The working class and poor will be made to suffer to pay for the ballooning U.S. military budget: not just in higher taxes and cuts to social security and health care but also in the further attenuation of civil liberties in the name of national security, and with the loss of countless lives in any military confrontation that may eventuate.

We live in a dangerous world. We have been subjected to the horrors of the “war on terror” since 9/11, a period that has turned whole countries into wastelands. Now the U.S. threatens still worse.

The notion, popular in recent years, that we will never again see a war between large imperialist states – like we did in the 20th century, when established powers tried to crush their rivals at the cost of millions of lives – is badly mistaken.

The emerging great power rivalry now under way may involve some different actors from those that came before, but the consequences will be the same unless it is stopped in its tracks.