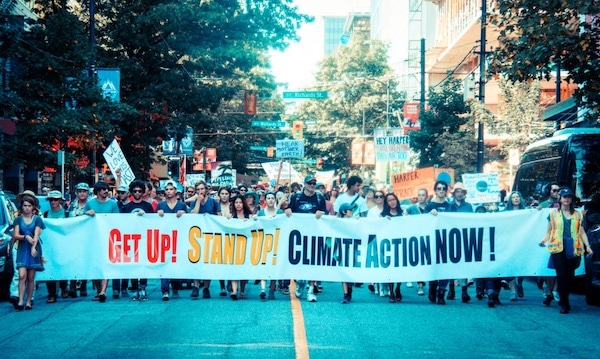 [This article, part of a symposium on “building a new world within the shell of the old,” criticizes the perspective that rejects both capitalism and socialism in favor of a “green” economy. It is re-posted, with permission, from Green Horizon, No. 44 (Spring/Summer 2022).]

The aspiration to “build a new world within the shell of the old” has a long history. It is typically associated with the traditions of cooperativism and anarchism. But it is also part of the socialist/communist tradition, as articulated by Marx himself. Marx characterized communist society, in Capital, as the society of “associated producers.” Although he did not delineate this vision in detail, he explicitly situated its embryo in the cooperative movements of his time. Viewing producer cooperatives as a dimension of the labor movement, he argued that their role in ultimately empowering the “associated producers” depended on their embracing, along with their workplace practices, the wider class struggle against the power of capital.

The tension between the tasks of transforming one’s immediate surroundings and restructuring the larger society has never abated. It reflects a duality that is present in all living creatures. We are at once separate beings and units of a collectivity. In the case of humans, especially, the collectivity exists at multiple levels, with links of reciprocity not only between individuals and their immediate communities, but also between any such local entities (as well as individuals) and wider regional/national/global structures.

This observation draws us back to recent arguments in Green Horizon, where a certain impatience if not exasperation is expressed in regard to socialist agendas, and it is suggested that our movement might more fruitfully focus on transforming our immediate surroundings rather than aiming at state power. More broadly, it is argued that socialism shares with capitalism a top-down and productivist orientation that we should firmly reject, in favor of a supposed Third Way that is neither capitalist nor socialist, but Green.

The inspirational model for this non- and even anti-socialist approach lies principally in the beliefs and practices of Indigenous peoples. I share the appreciation of Indigenous societies, as I explain in a whole section of my book on ecosocialism, in which I discuss the conditions under which the priorities of those societies might come to gain wider acceptance. The view that socialism or Marxism necessarily clashes with such an approach derives from particular 20th-century experiences of revolution as interpreted through a capitalist ideological prism. The stereotype of Marxism as inherently developmentalist, however, has been thoroughly refuted, over the last three decades, in the writings of Richard Levins, John Bellamy Foster, Paul Burkett, Kohei Saito, and Michael Lebowitz. The common thread in their arguments is that the anti-Marxists attribute to Marx a perspective–as with the labor theory of value–that Marx treats as belonging (on the contrary) to the dynamics of capital, which he seeks to undercut. As he puts it (contrary to widespread misconceptions about his position),

Marx’s approach, in its refusal to view Nature through the eyes of capital, i.e., as a resource which, like workers, can be used up and cast off at will, clashes frontally with capital’s developmentalist stance. Thinkers who fail to see this then fall easily into the “plague on both your houses” attitude expressed in many Green Horizon articles that touch on capitalism and socialism.

These articles consider capitalism and socialism side-by-side as if we were simply shopping for our preferred system (including “neither of the above”). But there’s a problem here, in that, without our having had any say in the matter, we are actually living under capitalism. This is so obvious that one easily forgets it. What it means, however, is that if we want to adopt any other way of organizing our lives, the alternative does not just offer itself to us on an even playing field with capitalism. In order to attain it, we must first get out from capitalist domination; we must strip away the power of capital!

No matter what our ultimate goal might look like, this is the sine qua non. We can have endless discussions about the precise contours of the society we want to achieve, and I share with Green Horizon writers a preference for as biodiverse, decentralized, and democratic an arrangement as possible. But the framework for whatever arrangement we seek will be set by the process through which we initially escape the claws of capital.

Given, then, that our starting point is the rejection of capitalism, what we face is not an either/or between socialism and a “green economy.” Our task instead is to envisage the general contours of what we want and then assess the various possible ways of getting there. While certain elements of a green or localized economy can be introduced directly, the complete liberation it envisages cannot be reached without dissolving the core institutions of capitalist power, including its aggressive/competitive/exhibitionistic culture. This has been, and remains, the historic task of socialism. After all, what can replace the power of a minuscule profit-driven propertied class if not the power of the organized majority (whatever precise form this power might take)? And what is it that can weld this majority into a political force, if not a common class interest?

The reason so many Green writers seem to balk at this conclusion is that, echoing the surrounding capitalist consensus, they identify socialism by definition with the harshest of its first-epoch manifestations (e.g., the Soviet Union under Stalin), thereby refusing to challenge the negative impression of socialism that they encounter in workers socialized by corporate media. Lifting actual socialist revolutions out of their historical context, they turn the outcomes of particular mixes of national and conjunctural traits into ironclad axioms as to what socialism entails. They see socialism as being inherently bureaucratic and top-down, whereas in fact the revolutionary process brings numerous impulses and tendencies to the fore, making for a range of possible outcomes.

What drives the frequent negative or repressive traits is a mix of factors, which vary in character and importance from one country or set of conditions to the next. Some aspects of the prerevolutionary culture–e.g., patterns of hierarchy–may be difficult to shake, especially under conditions of scarcity. Probably the biggest adverse factor, however, is the drive of capitalist interests–whether internal or external–to disrupt and destroy the revolution, even (or especially) if it has wide popular support and could serve as an inspiration to others. To the extent that a revolutionary process begins on a note of hope (for example with an election victory by a socialist-oriented party or coalition), globally imposed U.S. sanctions can be counted on to bring it grief, compromising its achievements and giving corporate media and politicians a pretext to call its leadership dictatorial (as in the present case of Venezuela).

Those with “green” goals who seek to avoid such unpleasantness tout the scenario of local grassroots organizing, including a multiplicity of diverse institutions. I do not reject any of this; it plays a necessary role in drawing people into activism and also in eventually running the society that we aspire to. The problem, however, is that it does not address the current persistence of the monster in the room, namely, overarching capitalist power. Political action to confront that power requires a unified movement. The view that such unity precludes concern for the diversity of popular needs reflects precisely the negative stereotype of socialism–and of revolution–that the capitalist ruling class invokes to preserve its own legitimacy. The point is not to deny instances where revolutionary parties or regimes have done the wrong thing; the point is to understand those moments and to recognize that socialist movements and socialist-oriented governments are “works in progress,” with conscious protagonists who have every reason to try to avoid the consequent disappointments in the future.

If you really want changes requiring the dismantling of capitalism–and this does include the changes necessary to the imagined “green economy,”–then you will join in these efforts rather than condemning the project that inspires them.