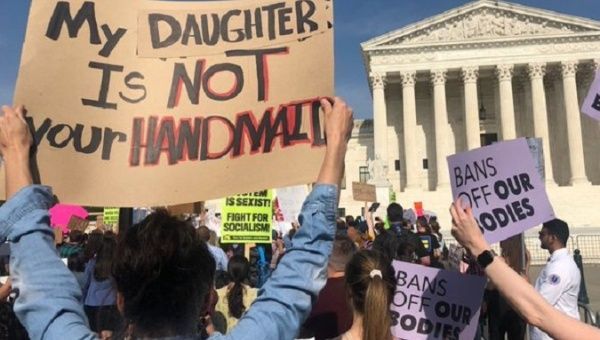 A leaked draft majority opinion from the Supreme Court on abortion rights has sent a jolt through the United States. According to the internal document obtained by Politico, the Supreme Court has voted to strike down the landmark “Roe v. Wade Decision.”

The draft opinion “is a full-throated, unflinching repudiation” of the 1973 decision which guaranteed federal constitutional protections of abortion rights, and a subsequent 1992 decision — Planned Parenthood v. Casey — that largely maintained the right, Politico wrote.

“Roe was egregiously wrong from the start. We hold that Roe and Casey must be overruled,” Conservative Justice Samuel Alito stated in the document labeled as the “Opinion of the Court.”

A person familiar with the court’s deliberations told Politico that four of the other Republican-appointed justices — Clarence Thomas, Neil Gorsuch, Brett Kavanaugh, and Amy Coney Barrett — had voted with Alito in the conference held among the justices after hearing oral arguments in December, and that line-up remains unchanged as of this week.

The three Democratic-appointed justices — Stephen Breyer, Sonia Sotomayor, and Elena Kagan — are working on one or more dissents. How Chief Justice John Roberts will ultimately vote, and whether he will join an already written opinion or draft his own, remains to be seen.

NOT YET A COURT DECISION

The Supreme Court confirmed the authenticity of the document on Tuesday but underlined “it does not represent a decision by the Court or the final position of any member on the issues in the case.”

“To the extent this betrayal of the confidences of the Court was intended to undermine the integrity of our operations, it will not succeed,” Roberts said. Noting that “the work of the Court will not be affected in any way,” the chief justice also directed the court’s marshal to launch an investigation into the source of the leak.

Jonathan Peters, a media law professor at the University of Georgia, tweeted that the U.S. Supreme Court “has kept its secrets and has kept confidential its internal processes and deliberations,” adding that leaks from the institution “are rare and remarkable, but they are not unprecedented.”

The draft majority opinion, if adopted, would effectively eliminate abortion protections at the federal level and hand authority over abortion access to the states.

U.S. President Joe Biden believes that “a woman’s right to choose is fundamental.” “Roe has been the law of the land for almost fifty years, and basic fairness and the stability of our law demand that it not be overturned,” the Democrat stressed, adding that “if the Court does overturn Roe, it will fall on our nation’s elected officials at all levels of government to protect a woman’s right to choose.”

Top congressional Republicans have flocked to condemn the leak, calling it a coordinated campaign to intimidate and obstruct Supreme Court justices.

“Last night’s stunning breach was an attack on the independence of the Supreme Court. This lawless action should be investigated and punished as fully as possible,” Senate Minority and Republican Leader Mitch McConnell said in a statement.

The leaked draft memo that states the Supreme Court has struck down #RoeVWade is an ATROCITY but It is not yet law & doesn’t have to be, but what they plan to do & will do if WE don't stop them

With the midterms just six months away, the Democratic and Republican leaders also went at each other on the Senate floor on Tuesday. “The Supreme Court is poised to inflict the greatest restriction of rights in the past 50 years not just on women but on all Americans,” Senate Majority Leader Chuck Schumer said.

“Under this decision, our children will have less rights.” “The far left has been shamelessly attacking it,” McConnell responded.

“Democrats in Congress have endorsed partisan plans for partisan court-packing, sent the Justices threatening legal briefs, scheduled sham hearings to smear judges.” Neal Katyal, former acting solicitor general of the U.S., described it as “the first major leak from the Supreme Court ever.”

“Once the draft is circulated, the justices in dissent will write an opinion,” Katyal tweeted. “But the tenative vote seems strong, and Chief Justice Roberts is irrelevant if the 4 + Alito hold with their tentative votes.”

“So there is the possibility an opinion can flip after oral argument and the tentative vote, so it’s theoretically powerful the Alito opinion won’t be the vote of the Court,” he analyzed. “But it would require a Justice BESIDES Chief Justice Roberts to flip.”

Protesters of opposing sides gathered outside the Supreme Court on Capitol Hill in Washington, D.C. on Tuesday, holding posters while chanting slogans. Capitol Police tweeted at noon that they have temporarily closed roads around the area “out of an abundance of caution, in order to keep the public safe.”

The draft opinion under scrutiny was in response to a case stemming from a 2018 Mississippi law banning abortions after 15 weeks. The Supreme Court is expected to rule on the case before its term ends in late June or early July.

Without the 1973 “Roe v. Wade Decision,” abortion would immediately become illegal in at least 13 states across the United States, while Republican-led states are already moving to pass and enact restrictive laws.

A new ABC News/Washington Post poll found that majorities of Americans support upholding Roe, say abortion should be legal in all or most cases and see abortion as a decision to be made by a woman and her doctor, not by lawmakers.

Fewer, 25 percent, say abortion access should be harder than it is currently. The Supreme Court is the final appellate court of the U.S. judicial system, with the power to review and overturn lower court decisions, and is also generally the final interpreter of federal law, including the nation’s constitution.