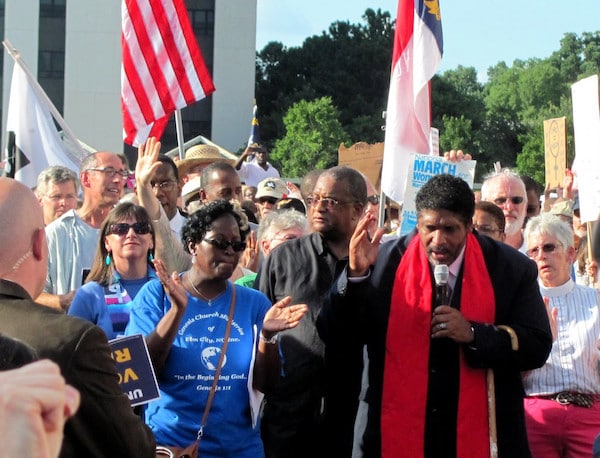 Rev. William Barber, an indisputable champion of the poor and a consistent voice demanding an end to poverty, may have made a serious moral and ethical error that effectively placed him outside of the “Kingian” framework that informed Dr. King’s work especially during the last year of his life.

In an attempt to make a point about the flawed priorities of the duopoly, Dr. Barber wrote in an email to the “movement family” on Saturday, April 30, 2022 that, “despite the political gridlock on Capitol Hill, Republicans and Democrats have acted swiftly to approve historic military aid to Ukraine. In the face of such a moral imperative, it would be anathema for either party to ask,

How are we going to pay for it?

He then went on to suggest that the “moral clarity” that informed the decision to provide military support to Ukraine was contradicted by the lack of moral clarity or support for addressing the pressing needs of the poor. He identified those two contradictory policy orientations–money for war but no money to pass “Build Back Better” legislation, for example, as representing the moral and ethical contradiction at the heart of U.S. politics.

I will give our dear brother the benefit of the doubt. He was making the point that the duopoly will support in a bipartisan manner those items that it deems a priority. For Rev. Barber and the Campaign, the issue of poverty and its devastating social consequences should be a priority for the U.S. state. However, in trying to make that point Rev Barber seemed to support the Biden’s administration’s war policies which as a follower of Dr. King would seem like a major contradiction. It would seem that to equate a moral imperative for providing military aid to Ukraine to wage war, no matter if it is claimed to be defensive, would be a dramatic departure from the non-violence ethos at the center of Dr. King’s worldview.

Dr. King said himself that it was his silence on the war that presented a moral contradiction that could only be ultimately resolved by him speaking out in opposition to the Vietnam war. It is unimaginable that Dr. King would give his blessings to a military aid package that Rev. Barber’s language appears to do while simultaneously not demanding an end to the conflict as Rev Barber clearly failed to do in his communication to the movement family. We must now ask Rev Barber if his characterization of the military aid package as a moral imperative was just a clumsy use of words or does he actually support the ultimate expression of violence–war?

We all know the history. After the student Non-Violent Coordinating Committee (SNCC) and all the radical Black liberation and socialist organizations had condemned the war in Vietnam, Dr. King finally broke his silence, as he framed it, and began to speak out against the war in early 1967 with the most extensive and important speech on April 4, 1967, at the Riverside Church in New York. The capitalist rulers understand symbols and so on April 4, 1968, Dr. King was murdered in Memphis where he was supporting a strike of Black sanitation workers against the Memphis city government.

Rev. Barber claims that “King was gunned down for his efforts to build a Poor People’s Campaign.” There is no doubt that the poor people’s campaign was a significant factor. The rulers understood the danger of Dr. King venturing into class politics, especially with his social democratic positions becoming more evident. But what Barber glosses over is that while the poor people’s campaign was seen as a threat, it was King’s break with the democratic party establishment, and at that time the majority position of the U.S. public who supported the war effort, that made Dr. King the most hated man in the country.

It is always dangerous to be in a nation that is undergoing an irrational war frenzy, but the danger is exponentially increased if you are a dissident. Rev. Barber is a student of history and understands the potential threats when you break with power. Perhaps in order to try and salvage some semblance of the Build Back Better legislation Rev. Barber believes it prudent to concede the war effort in Ukraine in order to avoid alienating elements of the democratic party that he feels he has to continue to work with, even if it is clear that the party continues to move to the right, even rehabilitating ultranationalist white supremacists and literal neo-Nazis in the Azov regiments.

But as that old saying goes, when you lay down with dogs you might very well get up with fleas. And if you concede moral positions because of pragmatic considerations, you undermine your moral standing with your base and on top of that your opposition usually loses respect for you.

Rev. Barber and the Poor Peoples’ Campaign have already created a moral and political contradiction for themselves with their sloppy and dubious moral reasoning on Ukraine. That is, if the bipartisan decision to provide more weapons of war to Ukraine represents a morally uncontested position, how will the Campaign counter the argument that it is equally moral to continue to vote for the ever-increasing military budgets of the Pentagon in light of the supposed security threats from Russia and China?

It is the lack of political and ideological clarity that distorts moral clarity to the extent that you can believe you are behaving morally when instead you have only surrendered to power and are working on its behalf.

Dr. King made a choice. He put principles over politics and broke with power. The Poor People’s Campaign will find it difficult to bring people together to denounce poverty while now having to mute their criticism of military spending. It is this kind of politics that is at the heart of the contradiction between the people and the neoliberal capitalist democrat party and its sycophants.