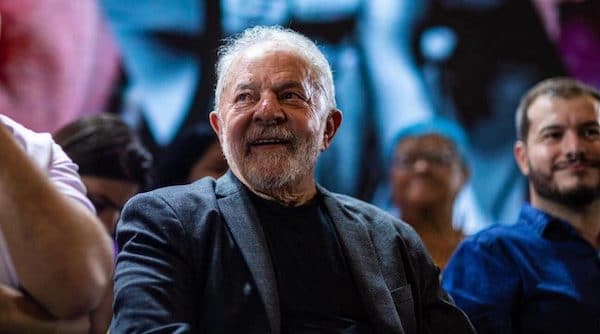 Former Brazilian President Luiz Inácio Lula da Silva, who’s once again in the running for the presidency, says that “God willing” he hopes to see the creation of a Latin American currency capable of overcoming the region’s dependence on the dollar.

Lula insists that Brazil ought to reestablish relationships in the region and overseas; “and let’s go back to reestablishing our relationship with Latin America and God willing, to create a new currency in Latin America, so that we don’t have to deal with being dependent on the dollar. We’re going to try to recuperate the BRICS.”

Lula hopes to see the creation of a Latin American currency in order to end dollar dependency.https://t.co/oZvHwH5One

The PT candidate made the statements at an event held on Saturday by the PSOL, in which the party formally announced its support for the front runner.

Lula also expressed his intention to strengthen ties with Africa; “we’re going to prioritize our relationship with the African continent, because Brazil has a debt to pay to Africa, this Brazilian debt is not measured in money, it is measured in solidarity, in the transfer of technology. Brazil has an obligation at the end of day, it’s been 350 years of exploitation of Black people. We are who we are because we are African blood.”

Polls show the PT candidate poised to win the first round. A late April survey conducted by PoderData shows Lula receiving 41% and Jair Bolsonaro receiving 36% of voter intention. Lula’s 5% lead over Bolsonaro increases to 9% in the second round.

The idea of a single Latin American currency was designed by economist Gabriel Galípolo, former president of Banco Fator, who has collaborated with Lula’s government program. The role of the Central South American Bank and how the exchange times between SUR and the local currency would work.

With less than six months to the elections, Brazil’s former president and pre-candidate for the Workers’ Party (PT), Luiz Inácio Lula da Silva, defended on Saturday the creation of a single currency in Latin America as part of the expansion of relations between countries in the region. “We do not have to depend on the dollar,” Lula said in a speech at the Electoral Congress of the Socialism and Liberty Party, in which the party declared its support for the former president for the October vote.

The idea of a single Latin American currency is defended by economist Gabriel Galípolo, former president of Banco Fator, who has collaborated with Lula’s government program. In a recent article published in the newspaper Folha de S.Paulo, signed by the economist and the former mayor of Sao Paulo, Fernando Haddad, both promote its implementation, in a model similar to the European euro, as a way of increasing regional integration and strengthening the monetary sovereignty of the region. Meanwhile, Lula ratified the project in case he is elected president: “We will reestablish our relationship with Latin America. And God willing, we will create a currency in Latin America”, he said, before thousands of militants.

The new South American digital currency would be called SUR and “would be issued by a South American Central Bank, with an initial capitalization made by the member countries, proportional to their respective shares in regional trade”, adds the text signed by Galípolo and Haddad.

For both leaders, the capitalization of SUR “would be made with the international reserves of the countries and/or with a tax on exports from countries outside the region. The new currency could be used for trade and financial flows between countries in the region”.

In addition, member countries “would receive an initial endowment of SUR, according to clear agreed rules, and would be free to adopt it domestically or maintain their currencies. Exchange rates between national currencies and SUR would be floating”.

Lula’s government plan is still under development and, according to those close to the leftist leader, should be finalized in the coming months. Although there is no definition of what will be included in the final text, his endorsement of the currency indicates approval of the idea.

Lula’s proposal is not new. In August 2021, current Economy Minister Paulo Guedes said that a single currency for Mercosur would allow for greater integration and a free trade zone, and would create a currency that could be one of the “five or six relevant currencies in the world.”

Lula’s proposal is not new. In August 2021, current Economy Minister Paulo Guedes said that a single currency for Mercosur would allow for greater integration and a free trade zone, and would create a currency that could be one of the “five or six relevant currencies in the world.”

Lula, who announced that he will confirm his candidacy on May 7, appears as a favorite in all polls ahead of the October elections, in which President Jair Bolsonaro will seek reelection.

In his speech on May 1, in São Paulo, Lula proposed the adoption of a single currency to accelerate the integration process in Latin America. The former president’s proposal is based on an article published by Fernando Haddad–former PT candidate for the presidency of Brazil and current candidate for governor of Sao Paulo–and by Gabriel Galípolo–a young university economist–in Folha de S.Paulo.

The authors mention that, in the face of the slow process of progress in integration and, at times, even setbacks, the creation of a South American currency could boost this process, strengthening the monetary sovereignty of the countries of the region, which face economic limitations due to the international fragility of their currencies.

The use of currency in the international arena, an unavoidable issue with the war in Ukraine and the sanctions against Russia, renews the debate on the sovereignty and self-determination capacity of peoples, especially for countries with non-convertible currencies. As in war threats, international reserves function as a defense of domestic currencies. But with emerging countries, all suffer economic limitations given the international fragility of their currencies.

The beginning of a monetary integration process in the region is capable of generating a new dynamic to the consolidation of the economic bloc, offering countries the advantages of access to and shared management of a more liquid currency. A currency issued by a South American Central Bank, with a large initial capitalization made by the member countries, proportional to their participation in regional trade. The new currency could be used for both trade and financial flows between countries in the region.

Member countries would be credited with an initial endowment of the SUR, being free to adopt it in their countries or maintain their currencies. Exchange rates between national currencies and the SUR would fluctuate.

The creation of a South American currency is the strategy to accelerate the process of regional integration, constituting a powerful instrument of political and economic coordination for the peoples of the region. It is a fundamental step in the direction of strengthening sovereignty and regional governance, which will surely prove decisive in a new world.