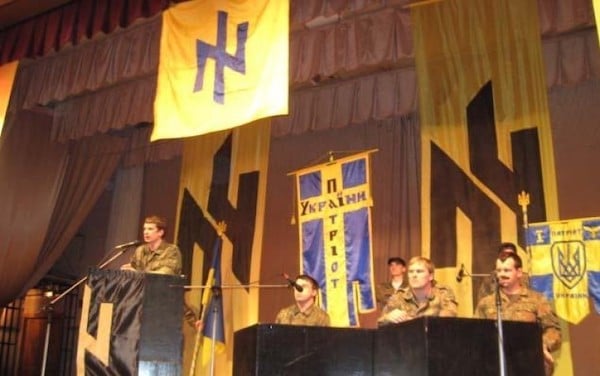 The supreme heroes of the West are the mostly neo-Nazi soldiers of the Azov regiment. These heroes, who smell of sulphur and swastikas, the Western journalists do not want to hear about them, they are only heroic fighters of the free and democratic Ukraine, a fabulous country where life was good before the Russian special operation. To counter this low propaganda broadcast by all the French public or even private media, it is necessary to understand who are the men behind this Azov regiment and first of all, their founder, whose story alone speaks for itself. The truth will come out, sooner or later, and all attempts to hide the thousands of Ukrainian neo-Nazi volunteers are doomed to failure. It was the same with the famous biological weapons that Iraq was supposed to have, and this lie was even attempted against Syria a few years later. Today, French and European journalists are painting a dream picture of this iconic unit, which, let’s remember, was just one of many of its kind, the infamous retaliation battalions, that horribly illustrated themselves in eastern Ukraine and the Donbass, starting in 2014. So who is Andrei Biletsky, the founder of Azov?

From neo-Nazi militias and ratonades to racial cleansing of populations. Born in 1979 into an ordinary family, Biletsky had followed a university career as a history student. He had worked on a thesis on the Ukrainian army of collaboration with Nazi Germany, the UPA, which flew the black and red flag and the ultranationalist trident. It should be remembered that it was noted for the abominable massacres of the summer of 1944 in Volhynia (between 80 and 200,000 Poles massacred). After successfully defending his thesis, he worked as a teacher at the University of Kharkov (early 2000s), having been active in neo-Nazi and ultra-nationalist groups for a long time in his youth. This led him to support the Serbian cause against Kosovo, not out of Slavic solidarity, but to “defend the supremacy of the white race” and against the “Islamisation of Europe”. He soon joined the Ukrainian National Socialist Party (2003, now renamed Svoboda), and founded a paramilitary organisation called Patriot Ukraine. This group, transformed into a militia, took part in hit actions, outside of any legality, to “clean up the cities of Ukraine of trafficking, tackle drug trafficking, migrants and undocumented migrants” (2005-2010). During these activities of beatings, undeclared demonstrations, and actions defined as “civic disobedience”, Biletsky was arrested for the first time in a direct confrontation with the police (18 September 2008).

The ideas advocated by this sulphurous character are well known, so much so that it is difficult to believe that the West can hide their content. In addition to the supremacy of the white race, Biletsky claimed to defend the West, to want the destruction of democracy in Europe, the destruction of capitalism and of the “Zionist international”, which would be replaced by “Nazocracy”, which are his own words. As a historian, Biletsky, in addition to the conspiracy theory that was very much a part of his rhetoric, was also committed to revisionism, rewriting the history of the Ukrainian people, whose roots, according to him, lay in the Scythian civilisation, which he linked to the Cossacks, in an attempt to erase the real origin of the Kiev Rus’. Going much further than the Nazis, he went so far as to declare that the latter had not taken into account the need to racially cleanse the population, including the Aryan population, in order to eradicate degenerate subjects, such as alcoholism, drug addiction and others. His idea was to take into account “the biological character of each family”. Going much further than American eugenics, he proposed the total and literal cleansing of the race, stating that the Ukrainian national culture was derived from the people, not from their history, religion, heritage, or language. He even declared that “the historical mission of the Ukrainian nation at this critical moment is to lead the white peoples of the world in the last crusade for its existence, and to fight against the sub-humanity led by the Semites”.

From the ultranationalist vendetta to the anarchy of Maidan. Its verbal and ideological violence only increased, until the arrest of the main leaders of its militia (August 2011), due to a shoot-out between its members (notably a certain Sergei Kolesnik). The ideological dispute turned into a fierce vendetta, and he was seriously wounded by a henchman of his group, who shot him several times with a revolver (19 November). In response, he organized an attack on the dissident group, and was arrested for assaulting Kolesnik, and sentenced to two months in prison (December 2011). His imprisonment led to a campaign of political agitation and demonstrations, crying political repression in several Ukrainian cities (Kiev, Kharkov, Lvov, Zhitomir, etc.) which led to the arrest and conviction of many activists for attempted murder, assault and robbery. The launching of the Maïdan operation by the American CIA gave him the chance to show his mettle and to finally emerge from the shadows and the sinister neo-Nazi agitations. The success of this colorful revolution had as a direct consequence, a law of the Rada of Ukraine, which pardoned all the members of his group, considered from then on as “political prisoners” having undergone the repressions of the pro-Russian regime in Kiev (February 2014). Highly visible, he became a member of the ultranationalist and neo-Nazi party Pravy Sektor (March) and was appointed head of the regions of Kharkov, Donetsk, Lugansk and Poltava (12 March). At the same time, his good services were recognized and he obtained an important position in the Ukrainian Ministry of the Interior, with extended powers. It is easy to imagine the terrible repressions that took place under his aegis in the regions under his control.

From the Azov regimental command to the seat of deputy. It was then that the Azov Battalion was formed, mainly with members of the Pravy Sektor party, soon reinforced by neo-Nazis from all over Europe (including the French). Under his leadership the battalion took part in the Mariupol massacre (9 May 2014), and the ensuing massacres, rackets, kidnappings and political repressions up to and including assassinations. For this operation, President Poroshenko did not hesitate to decorate him with the “order for courage” (2 August), then with the rank of lieutenant-colonel and head of the Azov battalion (18 September). However, his extremism worried the liberal fringe, but despite political pressure to oust him, he ran as an independent candidate in the Rada elections and was soon elected (26 October). Now a member of parliament, he was integrated into the Commission for National Security and Defense, and was mostly absent from the Rada benches… having participated in only 2% of the votes during his mandate! The little he presented as bills, ended up in the dustbin of history, his ideology going too far, and clashing with the capitalist social-democratic oligarchs in power in Ukraine.

He attempted a power grab, declaring that President Poroshenko was preparing a crackdown on Ukrainian ‘patriots’ and organized a ‘day of rage’ (9 March 2019). He also tried to expose the corruption of the oligarchs, saying he was ready to publish documents implicating the highest state officials (11 March). He was soon trapped by the SBU’s political police, notably through phone tapping that implicated him in the illegal purchase of a point weapon, or the denunciation of the beating of opponents and troublemakers within the Azov regiment. Discredited and very cumbersome for Ukraine, anxious to get rid of such a standard-bearer, he nevertheless tried to get re-elected to his seat, in the ranks of the National Socialist Party of Ukraine (Svoboda), but could not succeed and became a simple citizen (August 2019). Subsequently, Biletsky became an opponent of the Zelensky regime, organising demonstrations ‘against the capitulards’, including in front of his house, and that the Ukrainian president ‘could not be a spokesman for the national interests of the Ukrainian people» (It should be remembered that antisemitic ideology is an essential backbone of Pravy Sektor). It protested even more virulently during the evacuation by Ukrainian troops of a village in the Lugansk region (October), and then gradually disappeared from the political scene.

Three million dollars for his silence. Since then, his Azov friends have remained what they are… and are still serving in the ranks of that regiment. Some have already been killed by the Russians, the rest will soon be taken in the coming surrender. Those who have been taken prisoner are systematically exposed on social networks. It’s always the same story, talking tattoos, memorabilia to the glory of Nazi Germany and the “heroes of Ukraine”, as well as phones full of pictures that deceive no one. Biletsky, since then, has been washed clean by a discreet and virtual disappearance of the worst information on the Internet. A skilful job by Western and Ukrainian services has eliminated the character’s visibility. But enough remains to understand (especially in Russian). The question of his current fate has inflamed Russia, on the issue of the geolocation of the famous Ukrainian neo-Nazi. He is indeed under the law, both for his activities during the Maidan, as a figure of neo-Nazism in Ukraine and for the Mariupol massacre and the abuses during the ATO operation. However, he appeared on social media to make various irrelevant (and hostile to Zelensky) statements, and when asked about this, the head of the Azov regiment said he was not on the battlefront… but on the political front. However, Russians believe that he has already fled abroad. This is interesting because Ukraine has no interest in him being caught by Russia. His exfiltration from Ukraine therefore seems very plausible. Yesterday an article appeared which revealed that Biletsky has made a deal with President Zelensky, the terms of which are a payment of three million dollars for the silence of the former MP and the neo-Nazis of the Azov Regiment, as well as a helicopter to evacuate the current head of the regiment, Denis Prokopenko. Criticism of the former Azov leader has effectively fallen silent for about 15 days. Prokopenko gave an interview published today, it is unlikely that he will be able to leave the Azovstal ruins alive… except as a prisoner of Russia.