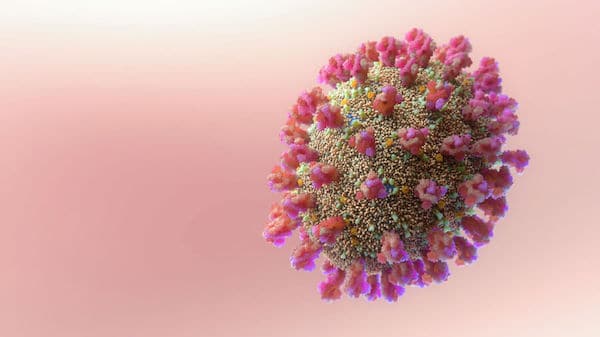 This image is an 2021 representation of the novel coronavirus (SARS-CoV-2) and is representative of all current variants. (Photo: NJ Spotlight News)

Popular culture, competence, justice, values, and the dream of betterment may have been the pillars on which the USA’s soft power was based, build upon the ground of success. Success made the others attractive; success is the most powerful attraction. Now the West is losing its aura of success, through endless wars, divisive politics, COVID failure, financial crises, debt. And ever more desperate attempts to hold power against ever bolder dissent. It’s just beginning. And not just the USA, the West doesn’t present well any more: protests in Amsterdam, London, Berlin; a year of gilets jaunes in France. The world is watching. Not efficient, not attractive, not law-based. Not successful.  – Patrick Armstrong

A story of two civilizations: one learns from history, the other doesn’t.

Coronaviruses have been with us for as long as conspiracies, so it’s natural to link them. But the history of epidemics provide better explanations than any conspiracy theory and useful advice to those who learn from it.

When a Swine Flu scare struck during the 1976 presidential campaign, Gerald Ford endorsed mass immunization. The astonished WHO (which had not been consulted) announced, “No other countries have plans for mass inoculations”. But U.S. officials pressured the WHO to endorse Ford’s decision and lo! “The following day’s headlines read, ‘WHO endorses President Ford’s plan for massive inoculation against swine flu virus’”.

46 million obediently took the shot, and 500 of them came down with Guillain-Barre syndrome, a neurological disorder that causes full-body paralysis and for which no cure exists. 4000 Americans claimed $3.5 billion in damages from Uncle Sam. “By far the greatest number of the claims, two-thirds, are for neurological damage or even death, allegedly triggered by the flu shot,” said Mike Wallace on 60 Minutes. The fiasco contributed to Jimmy Carter’s win.

When the AIDS epidemic struck in 1981 Ronald Reagan ignored it–old people and homosexuals were dispensable but political careers were not–and was reelected in a landslide.

Since then, governments have treated epidemics as the acts of capricious Gods, mumbled about ‘bad ‘flu seasons’ and let herd immunity to work its magic, and rid us of our elderly, infirm, and vulnerable.

I remember distinctly going to a meeting at the Cabinet Office, where we got lecture on herd immunity. The last time I discussed herd immunity was when I worked on a pig farm 40 years ago. It was absurd that actually [you] would build up herd immunity by allowing people to die. And so, while the government was going into eugenic formulas and discussing all this stuff, they were not making adequate preparations.

Lacking Britain’s National Health Service, how the U.S. could have made ‘adequate preparations’? Americans rightly distrust their medical industry, their media, and their government and, increasingly, each other. 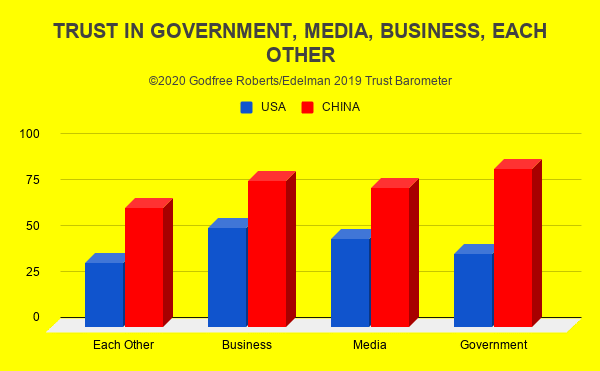 The CDC (born in 1946 as the U.S. Army Communicable Disease Center and still headed by an Army officer) has only ever provided surveillance, research, and advice, leaving execution to the Army’s chain-of-command. The national health department of Swaziland has more public health field staff than the CDC.

They made their laissez faire obvious in 2014. The outbreak of Ebola, with its 40% case fatality rate, triggered alarm about the disease spreading across America, and state governors demanded mandatory quarantines for healthcare workers returning to the U.S. from afflicted regions.

I can’t imagine shutting down New York or Los Angeles. But the judgement of the Chinese health authorities is that, since it’s spreading throughout the provinces… it’s in fact going to help them contain it. Whether or not it does or does not is open to question because historically when you shut things down it doesn’t have a major effect.

The Chinese probably have more experience dealing with epidemics than the rest of the world combined. And more success. They never allowed the Black Death to gain a foothold, for example. After WWII, they needed only two years to eliminate diseases that had been endemic for a century. The U.S. National Institutes of Health said,

Life expectancy under Mao ranks among the most rapid, sustained increases in documented global history. 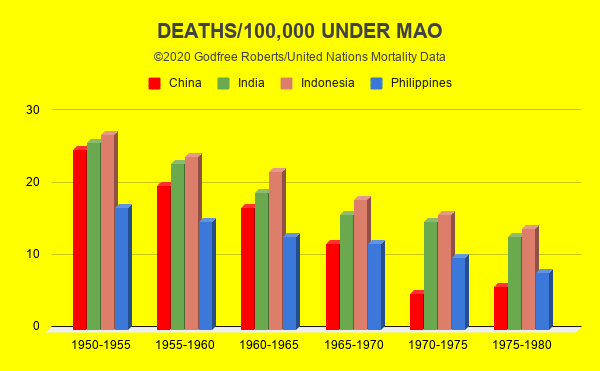 Following the 2003 SARS outbreak, China assigned three teams to prepare for the next epidemic: 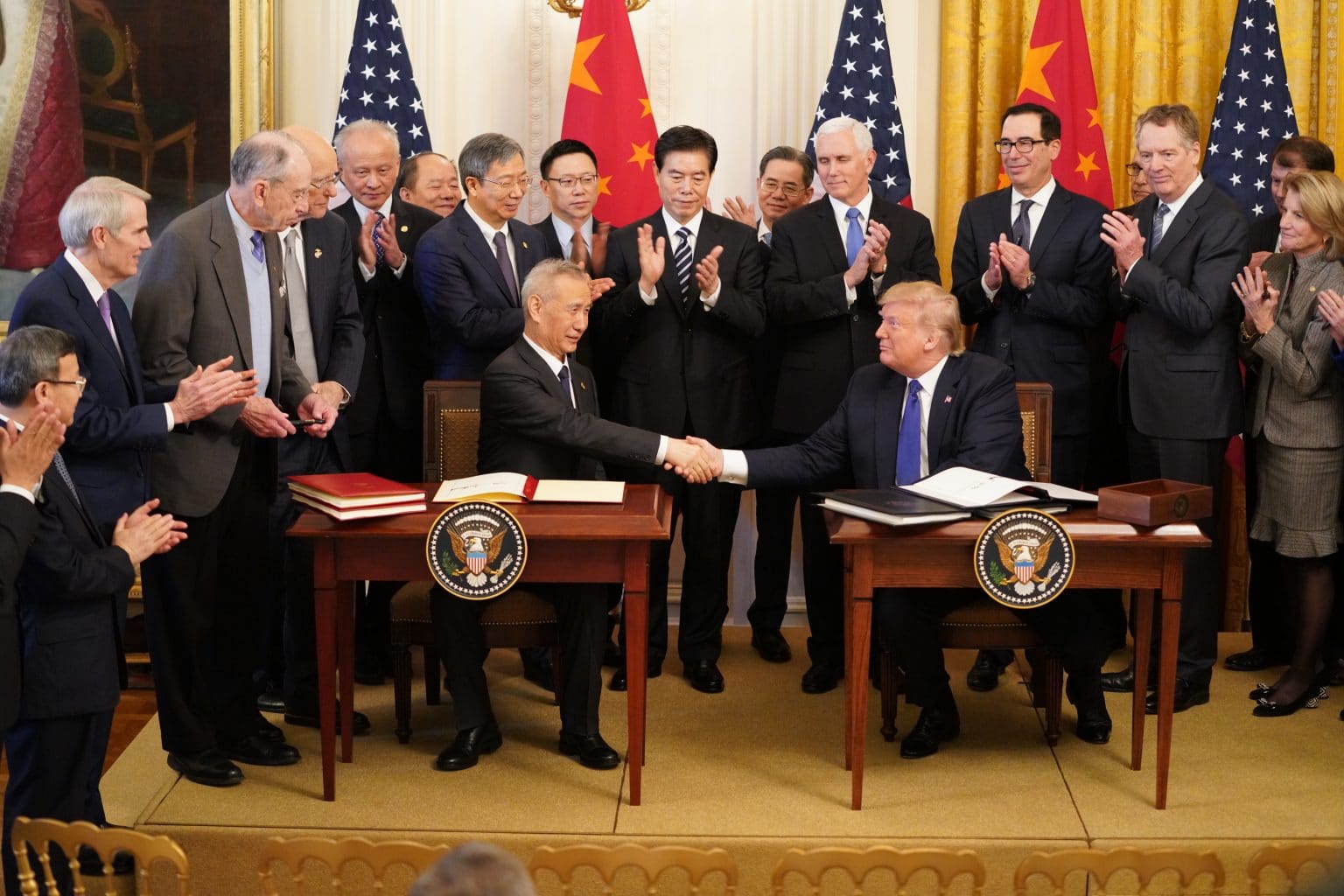 Despite repeated warnings, when the WHO announced the outbreak in January, 2020, Dr. Fauci announced, “The American public shouldn’t worry about the coronavirus outbreak in China. It’s a very, very low risk to the United States.. And we have ways of responding–like we did with this one case in Seattle, Washington, who had traveled to China and brought back the infection.” President Trump repeated his assurances.

While politicians ignored the virus (already widespread here), the spectacle of a huge country like China shutting down its cherished economy convinced our media insisted that the virus must be an existential threat–while simultaneously predicting that the shutdown would wreck China’s economy. Nancy Pelosi cheered the effects of virus on China’s economy and the State Department circulated ‘Blame China!’ memos to embassies. As always, official acknowledgement drew even more attention to the outbreak.

The first domestic deaths in the West triggered demands that government Do Something, and Britain abandoned its ‘herd immunity’ policy as ‘insensitive’ and fired the man who proposed it. But the CDC hung tough. Covid discussions were moved to secure facilities, classified, and released only on a need to know basis. Covid testing was banned and local health officials who insisted on testing were served cease and desist orders. Media fixation on the epidemic finally forced the CDC to lift its testing ban in mid-March.

A European epidemiologist then in China suspected that China had a deeper agenda and wrote me at the time:

I find the Chinese government’s response extremely interesting, as though it deliberately exaggerated C-19. It seems the PRC is fanning fears on purpose, using maps filled with dark areas and shutting down everything everywhere–on a staggering scale. Few people realize just how big Wuhan is, and how significant Chinese New Year is in terms of people moving around and going in and out of those wet markets every day: literally hundreds of thousands of people leaving them, taking public transport, going home, exposing family and visiting relatives who in turn go to crowded areas and use public transport themselves. Comparing the paucity of cases to the population and the relatively low death rate, I suspect Wuhan was practicing for a really serious outbreak, like Ebola. And, just as they did with SARS, the government has taken copious notes on how to improve their response–while showing us how China will respond.

As we are beginning to realize, China benefited greatly from testing its civil defense, management, and social cohesion. For scope, speed, agility, sophistication, and geopolitical impact, nothing in history compares to it. For effectiveness, it is unparalleled, as this chart reminds us: 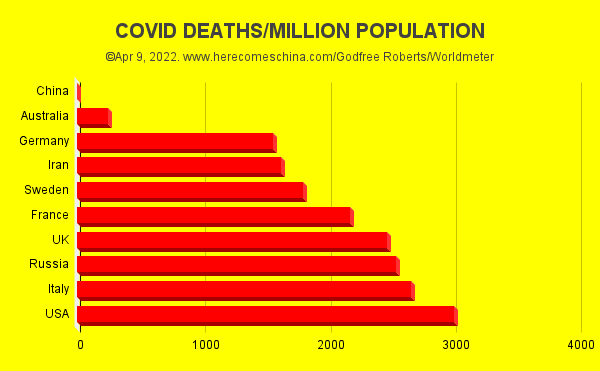 Some societies learn from experience. Some repeat it.

Godfree Roberts publishes the Here Comes China newsletter and wrote, “Why China Leads the World: Talent at the Top, Data in the Middle, Democracy at the Bottom.”