Canada’s “left wing” party is openly opposed to negotiating an end to the war in Ukraine.

In “Feds must do more to support Ukraine, say experts, Ukrainians, opposition MPs” NDP foreign affairs critic Heather McPherson repeats the party’s call to send more weapons to fight Russia and suggests the NDP formally opposes negotiations. The Monday Hill Times article reported, “McPherson said while the NDP will always look at non-violent means of conflict resolution by diplomatic and humanitarian means, Russia’s war against Ukraine is not a case when it can be done.” 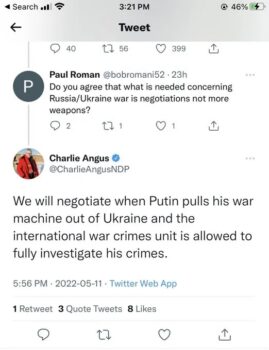 MP Charlie Angus is more forthright in his opposition to negotiations. Asked on Twitter last week “Do you agree that what is needed concerning Russia/Ukraine war is negotiations not more weapons?” Angus responded, “We will negotiate when Putin pulls his war machine out of Ukraine and the international war crimes unit is allowed to fully investigate his crimes.” (While they trend in different directions, one can support sending weapons and seeking to negotiate.)

Angus’ statement is a call to prolong and escalate the war. When I tweeted as much, Angus blocked me. Apparently, Angus talks tough about Ukrainians fighting until the end but is sensitive to being challenged on Twitter.

As part of their three-year pact with the Liberals the NDP agreed to a budget that allocated half a billion dollars for arms to fight Russia (on top of more than $100 million in arms delivered to Ukraine in previous weeks). McPherson and Angus’ statements on negotiations suggests the party also agrees with the Liberals’ hostility to seeking diplomatic pathways to end the violence in Ukraine.

On Monday foreign affairs minister Mélanie Joly told CBC Radio, “at this point, like I said, the goal is not to be negotiating.” Two weeks into Russia’s illegal invasion Joly said “right now, it’s not about a diplomatic solution.” Prior to February 24 Canadian officials weren’t keen on negotiating either.

In word and deed Canada has sought to escalate tensions and extend the fighting. It is echoing evermore open calls by British and U.S. officials to prolong the fighting and turn Ukraine into a proxy conflict. During an April 9 visit to Kyiv Boris Johnson reportedly pressured Ukrainian president Volodymyr Zelenskyy to ditch peace talks and after the British PM met French President Emmanuel Macron last week his office released a statement saying “he urged against any negotiations with Russia on terms that gave credence to the Kremlin’s false narrative for the invasion.”

Hinting at what’s long been U.S. policy in Ukraine, Defence Secretary Lloyd Austin declared recently, “we want to see Russia weakened to the degree that it can’t do the kinds of things that it has done in invading Ukraine.” In explaining his support for a $40 billion U.S. arms and aid package to Ukraine, Congressman Dan Crenshaw tweeted, “Yeah, because investing in the destruction of our adversary’s military, without losing a single American troop, strikes me as a good idea.” Previously, Congressman Adam Schiff told the House of Representatives that the “United States aids Ukraine and her people so we can fight Russia over there and we don’t have to fight Russia here.”

While less crass with their declarations, the NDP is aligned with this thinking. As I detailed here, the NDP has been pressing conflict with Russia for years and has consistently supported measures that escalate tensions in Ukraine.

This reflects the party’s tradition of belligerence that I detail in Left, Right: Marching to the Beat of Imperial Canada. The NDP/CCF supported Canada fighting in Korea, Yugoslavia and Libya. To give but one example after Moammar Gaddafi was savagely killed in 2011 NDP interim leader Nycole Turmel released a statement noting, “the future of Libya now belongs to all Libyans. Our troops have done a wonderful job in Libya over the past few months.”

The NDP’s public opposition to negotiations that might end the horrors in Ukraine exposes the depth of the party’s warmongering.