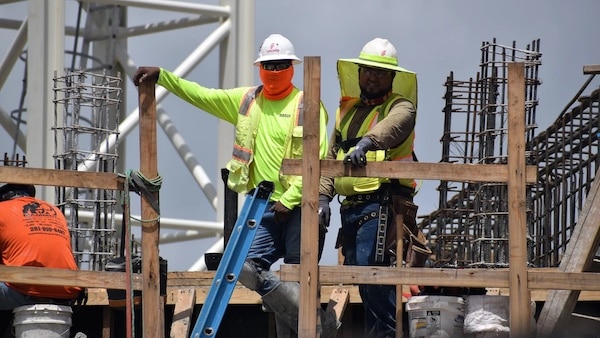 The chairman of the U.S. Federal Reserve, Jerome Powell, said his goal is “to get wages down.”

In a press conference on May 4, Powell announced that the Fed would be raising interest rates by half a percentage and implementing policies aimed at reducing inflation in the United States, which is at its highest level in 40 years.

According to a transcript of the presser published by the Wall Street Journal, Powell blamed this inflation crisis, which is global, not on the proxy war in Ukraine and Western sanctions on Russia, but rather on U.S. workers supposedly making too much money.

“Employers are having difficulties filling job openings, and wages are rising at the fastest pace in many years,” Powell complained.

There are more job vacancies than there are unemployed people in the United States, as the economy recovers from the Covid-19 pandemic.

Powell claimed this discrepancy between job vacancies and unemployment is due to high wages, which discourage workers from taking bad, low-paying jobs with few benefits, and therefore give them too much power.

“Wages are running high, the highest they’ve run in quite some time,” the Fed chairman lamented.

Workers need to be disciplined by the labor market, he insisted.

There’s a path by which we would be able to have demand moderate in the labor market and have—therefore have vacancies come down without unemployment going up, because vacancies are at such an extraordinarily high level. There are 1.9 vacancies for every unemployed person; 11½ million vacancies, 6 million unemployed people.

Powell aims to do this by reducing wages.

“By moderating demand, we could see vacancies come down, and as a result—and they could come down fairly significantly and I think put supply and demand at least closer together than they are, and that that would give us a chance to have lower—to get inflation—to get wages down and then get inflation down without having to slow the economy and have a recession and have unemployment rise materially. So there’s a path to that,” he said.

The Federal Reserve chairman did concede that “these wages are to some extent being eaten up by inflation.” But Powell blamed that rising inflation on increasing wages, which economist Michael Hudson says is an example of ridiculous “junk economics.”

Powell was first appointed Fed chair by Donald Trump in 2018. On May 23, 2022, he started his second four-year term, after being re-nominated by President Joe Biden and confirmed in a landslide bipartisan Senate vote of 80-19.

The U.S. federal minimum wage is just $7.25 per hour, and has remained at that level since 2009, despite significant increases in inflation.

It is true that the minimum wage has increased in recent years in numerous U.S. states, especially ones that have significantly higher costs of living like New York and California. But real wages have not kept up with inflation.

Even the Washington-based think tank the Peterson Institute for International Economics, which is infamous for its avid promotion of neoliberal policies, acknowledged in a January 2022 study, “U.S. wages grew at fastest pace in decades in 2021, but prices grew even more.”

Prices, however, have also risen rapidly, and so inflation-adjusted wages fell by 4.3 percent at an annual rate over the last three months, 2.4 percent over the last year and 1.2 percent lower than they were in December 2019.

While nominal wages have still grown faster in some sectors relative to its pre-pandemic trend, all sectors have seen below-trend real wage growth.

Michael Hudson: Inflation is caused by corporate monopolies, not labor

Economist Michael Hudson responded to these remarks by the Fed, analyzing the inflation crisis in a May 13 panel organized by the International Manifesto Group.

“Inflation is basically the excuse that right-wing governments have for trying to lower wage levels by blaming the inflation on rising wages,” he said.

“What economists like to blame it [inflation] on is labor, on rising wages, on government social spending, and of course on Russia trying to break away from America’s unipolar international order,” Hudson explained.

He recalled his time working at Chase Manhattan Bank in the 1960s. Hudson’s boss was Paul Volcker, who would go on to serve as Federal Reserve chairman under U.S. presidents Jimmy Carter and Ronald Reagan.

He noted that Volcker had “always said that the big concern of finance is wage gains will mean that the purchasing power of all of our investors, who have bank accounts, and stocks, and bonds, will have less power over wages. And our class interest is in increasing our power over wages, so we’ve got to keep wages down, even if it causes a recession. That’s basically the Federal Reserve’s policy.”

“The present Federal Reserve chairman, Jay Powell, came right out and announced that the Biden administration, Democratic Party policy is quote, ‘to get wages down and then get inflation down without having to slow the economy and have a recession and have unemployment rise materially’,” Hudson continued.

In other words, you want to keep the finance, insurance, and the stock market, real estate sector going; you just want to squeeze down wages somehow.

So the objective of all this is that, if labor wants to get a job, and the health insurance that goes with it, then labor will have to lower its wage levels. That’s the current U.S. government policy.

Today’s inflation throughout the world, not only in the United States but now in Europe, is led by pure monopoly powers, headed… by energy and food prices.

The United States and NATO are trying to blame inflation on Putin and Russia not exporting oil and gas to Europe, as a result of the NATO sanctions against it, but gas hasn’t stopped yet, and… the U.S. oil companies have said that, looking forward, they see a supply problem, and they’re raising prices now even though the supply of oil hasn’t really changed at all.

So you have supply being fairly constant, but prices going way up, because the oil companies say, ‘We anticipate they’ll go up, therefore we’re raising oil prices, because we can.’ Well, the same thing is happening in agriculture.

You’re also having rent rising as a result of the plunge in home ownership rates, that started with President Obama’s mass evictions of the victims of junk mortgage lending.

And the private capital investors that are taking over all of the houses, the owner-occupied houses that have defaulted, they’re being sold off, and you’ve had home ownership rates falling by about 10 percent in the United States since 2008.

Well now you have companies like Blackstone very sharply rising rents. In New York they’ve been jumping by about one-third in the last year. So again, with the same amount of real estate, prices are going way up.

“So none of this can be blamed on labor,” Hudson stressed.