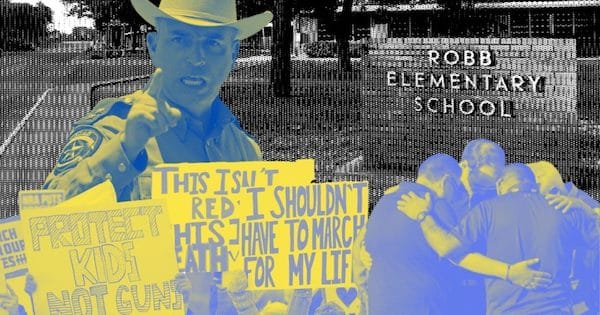 The Party for Socialism and Liberation expresses our deepest condolences to those impacted by the horrific massacre that was committed at Robb Elementary School in Uvalde, Texas. We condemn in the strongest possible way this atrocious attack, and express our solidarity to the families, children, teachers, and community members who experienced and witnessed the tragedy and its aftermath.

Had it not been for the total cowardice of the police, the horrendous scene at Robb Elementary School could have been significantly altered, and lives could have been saved. Nineteen children and two teachers were killed in the shooting, while 17 other people were injured. However, virtually the entire time the shooter was in the school–between 40 and 60 minutes–he was “barricaded” in one classroom, which is where all of the fatalities happened. According to a member of the Department of Public Safety, the “barricade” actually meant that the shooter simply locked the door of the classroom he entered.

While the shooter spent up to an hour stationary in one classroom, the police stayed outside of the school instead of entering the building and stopping the shooter, allowing more people to be killed than in any school shooting besides Sandy Hook. Onlookers, community members, and families of students at the school urged the police to enter and stop the shooting during the time that the cops stood idle and waited outside, but their pleas were ignored. Police inaction was so significant that unarmed bystanders discussed the idea of entering the school themselves as they watched those who claim to “protect and serve” stand by as schoolchildren were slaughtered.

In addition to breathtaking cowardice, this inaction also reflects police officers’ disregard for the lives of Latino children. The population of Uvalde, Texas is 73% Latino, and the population of Robb Elementary School is 90% Latino. On top of that, 87% of students come from families considered by the school to be low income. When poor and working class people, especially people of color, are being killed, saving their lives is simply not a priority for the police.

It is also an absolute disgrace that the loved ones of the victims cannot even hope for solace in knowing that the industry that profits while the school shooting epidemic rages will be held accountable. Thanks to the “Protection of Lawful Commerce in Arms Act” passed under the Bush administration in 2005, gun manufacturers and dealers are afforded broad immunity against civil lawsuits stemming from shootings that happen with their products. With only a handful of very narrow exceptions to this immunity, the PLCAA has protected the gun industry from consequences of their negligence and irresponsibility for almost two decades.

In virtually every other industry, most of which produce items that are much less potentially deadly, manufacturers are subject to civil liability should their products cause harm. However, the gun industry not only enjoys federal and state protection with the PLCAA, there are also 35 states that have enacted legislation that grants additional blanket immunity to gun manufacturers, or that prevents municipal governments from pursuing legal action against the gun industry.

The tragedy at Robb Elementary School is heartbreaking. When one considers all the ways that this massacre was amplified by the inaction of the police and that gun manufacturers have legal immunity, it is also enraging. To bring about an end to gun violence–to bring about an end to school and all mass shootings–we cannot rely on the good will of those who currently hold power in government. We must fight together, protect each other, and struggle for a society free from violence.