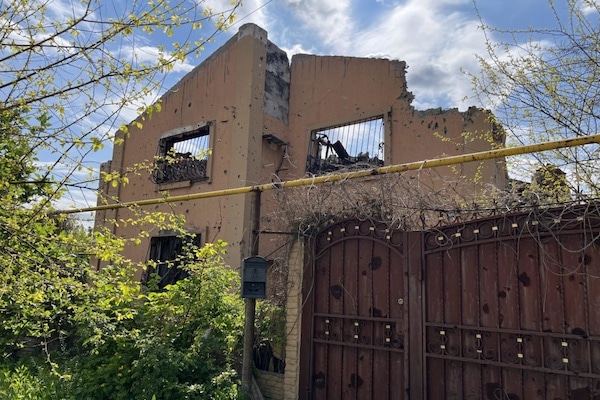 A residential block in the Petrovsky District in the west end of the city of Donetsk was recently hit by alleged Ukrainian military shelling. (Photo: Fergie Chambers)

The Russian “special military operation” in Ukraine reached its 90th day and the Western press continues to be inundated with unverified claims of war crimes Russian forces allegedly have committed. Accusations have been lodged against the Russian military for mass graves in Bucha, a narrative which has been widely accepted in North Atlantic Treaty Organization (NATO) countries. Despite requests from the Russian government and India, no independent inquiry has yet to take place. 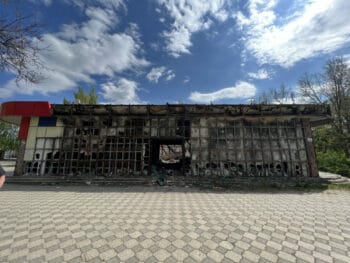 One shell hit this storefront in the building supply area of the Sokol Market. (Photo: Fergie Chambers)

Just four days ago, Newsweek published claims of Russian soldiers “targeting kids’ bedrooms” with explosives. Nestled far beneath the fiery headline is a soft disclaimer: “However, Newsweek has not independently verified any of the claims regarding children and explosives, which come from Ukrainian sources.” Such is the state of affairs in the U.S./EU/NATO aggression against Russia.

Perhaps these deluges of outrage would appear more sincere, if the well-documented plight of the civilians of the eastern Ukrainian breakaway region of Donbass had received passing mention in any mainstream Western outlets. In the Donbass region, two oblasts (provinces) known as Donetsk and Lugansk proclaimed their independence from Ukraine in 2015, shortly after the neo-Nazi-infected Ukrainian military began attacking their mostly Russian populations.

For eight years, war has raged in Donbass, and it has included an endless campaign involving shelling civilian areas, in violation of the Minsk Agreements between the Donbass republics, Ukraine and Russia. As of May 13, the Office of the Ombudsman in the Donetsk People’s Republic (DPR), put the total civilian death toll in DPR at 7,321, including 105 children. More than 14,000 people have been killed in the Donbass region since 2014, according to the International Crisis Group. The Ukrainian military did not respond to Toward Freedom’s multiple attempts to ask about attacks on civilians in Donetsk.

‘We Used to Hide in the Basement… Now, We Don’t Bother’

Toward Freedom sent this reporter to Donbass for nearly a month, and it took less than one day in Donetsk to witness the effects of Ukrainian forces purposely shelling civilians. That first afternoon, April 28, a local Telegram channel devoted to “online information about the current shelling situations by Ukrainian Armed Forces” reported the Sokol Market in the western Kirovsky District had been shelled. At 11:40 a.m., among the market’s busiest hours, Ukrainian forces—just miles away in Krasnogor—fired 10 BM-21 Grad rockets, or Soviet rockets. Initial reports on the scene were two dead, including a local high school teacher, but this has since been updated to five. This reporter arrived at 1 p.m., at which point the wreckage was apparent and two bodies remained on the ground.

No military presence was seen in this neighborhood—no base, no embedded soldiers, no checkpoints. Gennady Andreevich, an employee of the neighborhood safety commission and administrator of the Sokol Market, called it a “sleepy” district, where there is only this market, a strip of shops, a  park, and a number of Soviet-era residential buildings. The area, per Andreevich and numerous local residents, had sustained relentless strikes since 2014. Those hits have only intensified since February. One of the neighboring residential buildings had been hit as recently as two weeks prior. 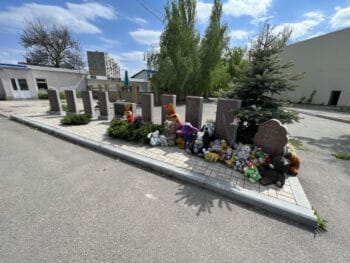 A monument to the more than 200 dead civilians in the Petrovsky District. (Photo: Fergie Chambers)

These sorts of markets are the central point of social gathering, commerce, and employment for working-class people, who cannot afford to frolic in more luxurious, capitalist-developed urban centers. The eyes of bourgeois mass media are never fixed on the poor. As such, the regular targeting of Donbass civilians goes unmentioned.

Even as cleanup efforts went on, artillery fire remained constant in the background.

The following day, April 29, the Donetsk News Agency reported the Petrovsky District, also in the west end of the city of Donetsk, had just been hit with nearly 80 Ukrainian shells, resulting in casualties.

Upon arrival at 8 p.m., this reporter first found a small grocery store, smoking from the roof, completely destroyed. A small clean-up crew was inside, and one elderly woman—the shopkeeper—stood alone and bewildered, and appeared not ready to speak to anyone. Behind the store was a large residential building, also apparently damaged by the shelling.

At the entrance to the building, a husband and wife were slowly cleaning up pieces of glass and wreckage at the main entrance. They were initially spooked seeing journalists, thinking anyone could have been Ukrainian operatives in plain clothes. But when they understood members of the press had arrived, they were eager to share their story of not just what had happened that night, but of the previous eight years. The woman, Elena, identified herself by first name only.

Elena, whose apartment balcony had been completely destroyed, said that this kind of attack was a daily occurrence for the residents of Donbass, many of whom—herself included—considered themselves Ukrainians. She said that U.S./EU arms shipments were the primary cause of the continued death and destruction, and wished to personally address the citizens of those countries, to ask that they might pressure their governments to cease the deliveries of weapons.

“In the beginning of the war, in 2014, all of us in the building used to hide out in the basement when the shells flew; now, we don’t bother,” said her husband.

We just have to go on with our lives.

Their children had moved east to Russia, away from the front lines. But for them—like many others—old age, a lifetime of attachment to one community and lack of economic flexibility made relocation impossible.

This particular building, in its entirety, was made up of 60 units, and was attached to a school.

As we parted, the couple saw our delegation of foreign journalists off warmly, entreated us to share their stories with the West in any way possible, and wished us peace.

‘God Will Sort Them Out’

In the frontline city of Kirovsk, a mining town in the Lugansk People’s Republic, this reporter visited the home of a man whose home was hit April 26 by a “Hurricane” rocket—another Soviet-era weapon—capable of destroying entire floors of large apartment buildings. But it failed to detonate as it plugged into an outer wall, next to his garden. The home was situated on a long dirt road, with only a handful of similar homestead cottages within range. The man explained that he believed the attack had been targeted from what he called “Ukro-Nazi” positions in the nearby town of Pervomaisk. Victoria Ivanovna, the mayor of Kirovsk, described such shelling as “constant,” and often targeted at schools, or other non-military locations important to the community.

Back in Donetsk, on May 10, a now-notorious U.S. expat-turned-DPR-combat-veteran named Russell “Texas” Bentley gave this reporter a tour of the districts on the edge of no-man’s land. The Petrovsky district was clearly hit the hardest; in places, block after  block contained not a single home untouched. In the center of the district, where a once-active market had since been abandoned, a monument stood for the civilian lives lost from 2014 to 2016. It listed more than 200 names.

Russell was no stranger to this kind of shelling.

They hit us out here, every (expletive) day. They always target schools, markets and grocery stores, never military. We never targeted any civilian areas; even aside from the ethical questions, it would just be (expletive) stupid. These are our people here. This is a fight for liberation. The last thing the DPR or [Russian President Vladimir] Putin want is to piss off the residents of places, which we believe will become liberated parts of the Republics. 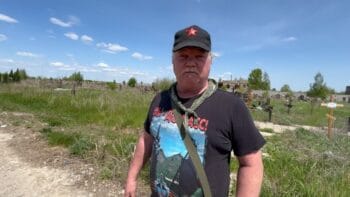 Russell “Texas” Bentley, 62, a U.S. expat who is now a fighter in the Donetsk People’s Republic Army. (Photo: Fergie Chambers)

Russell, 62, who served in the explicitly Marxist “Sut Vremeni (Essence of Time)” unit of the DPR army—as well as in the DPR special forces until 2017—lives with his wife, Lyudmila, in the Petrovsky district. Their home has not been hit to date, but a family of six just a few doors down had not been so lucky. The mother of the family showed this reporter the impact point of a shelling from the week before; it had destroyed their front wall, killing their dogs and barely missing the family room behind.

“We walk right past it,” she said. 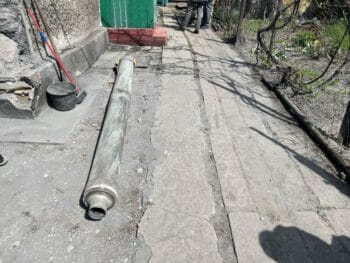 In spite of 8 years of attacks, and now endless constraints from isolation and sanctions, including a limit on running water to a few hours in the evening, the city of Donetsk, like all of Donbass around it, continues to move on with life; shops remain open, public transport runs, children go to school every day.

“There is absolutely no military reason to strike places like this. They do this to strike fear in our hearts,” said Andreevich, the Sokol Market administrator.

But it does not work.

Andreevich’s own administrative office had been hit this past March. Two of his co-workers were killed in that attack. At the end of our exchange, he looked sternly and said,

Sooner or later, God will sort them out, the people who are doing this.

Fergie Chambers is a freelance writer and socialist organizer from New York, reporting from eastern Europe for Toward Freedom.