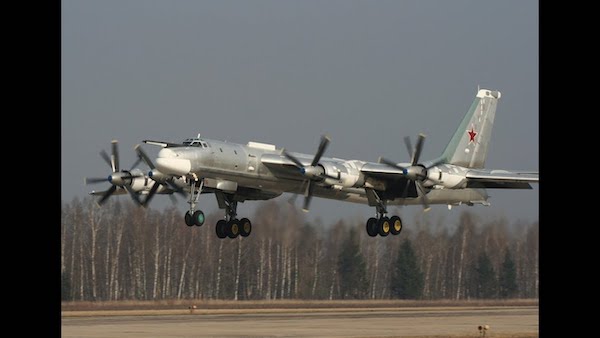 The joint air patrol over the waters of the Sea of Japan and the East China Sea on Monday by an air task force composed of Russian Tu-95MS capable of carrying nuclear weapons and Chinese H-6K strategic bombers couldn’t have been a knee-jerk reaction to U.S. President Joe Biden’s Asia tour, leave alone his provocative remarks conjuring up an apocalyptic U.S.-China war over Taiwan.

The Chinese Defence Ministry spokesman Senior Colonel Wu Qian pointed out that this has been the fourth strategic patrol jointly conducted by Russia and China since 2019, with the purpose of testing and improving the level of coordination between the two air forces, and promoting the strategic mutual trust and practical cooperation between the two militaries. As he put it,

This operation does not target any third party, and has nothing to do with the current international and regional situation.

That said, perceptions do matter in strategic posturing and Japan’s defence minister Nobuo Kishi has enthusiastically rushed to endorse an interpretation that the timing of the Chinese-Russian operation had something to do with the QUAD summit taking place in Japan on that very same day.

Conceivably, Kishi was on a cover-up, distracting attention away from the new geopolitical reality in the Far East. Indeed, the rebirth of militarism and revanchist sentiments in Japan, in a historic departure in the country’s post-World War 2 pacifist posture, with overt American encouragement and backing, provides the broader context for a Sino-Russian congruence. Ominously enough, Japan has lately switched to a diplomatic idiom to refer to the Kuril Islands as “occupied” territory, implying that Russia is an aggressor–although the historical truth may be vastly different.

Again, Japan has been flexing muscles lately as a ‘front-line state’ in imposing sanctions against Russia (including against President Putin) although in all of its history or politics or geography, the land of the rising sun has had nothing to do with the Russian borderlands in Ukraine. Above all, Japan has been overzealous in drawing a fanciful comparison between the situation around the Taiwan Straits and Ukraine.

Whichever way one were to look at it, Monday’s operation displayed a very high level of military cooperation between China and Russia at a juncture when the two countries are facing new provocations and added pressure from the U.S.. Quite obviously, Beijing pooh-poohs the U.S. Defence Secretary Lloyd Austin’s declaration in late April that Washington wanted to see Russia weakened militarily “to the degree that it can’t do the kinds of things that it has done in invading Ukraine” and will be unable to recover quickly.

Given the close foreign-policy coordination between China and Russia, it is entirely conceivable that Beijing has an insightful knowledge of the actual state of play in Russia’s special operation in Ukraine.

On the other hand, it is a reasonable surmise after Monday’s joint strategic air patrol by China and Russia on Monday that Beijing has pushed back the Western attempts to browbeat it on the Ukraine issue. Clearly, on Monday, Beijing was risking “a major reputational damage,” in the western world–to borrow the threatening words of the EU’s executive president Ursula von der Leyen after “a very frank and open” videoconference with the Chinese leadership in early April.

What emerges are three things. One, Beijing continues to adhere to the letter and spirit of the joint statement of February 4 with Russia on the International Relations Entering a New Era and the Global Sustainable Development which was issued during President Vladimir Putin’s meeting with Chinese President Xi Jinping in Beijing. Two, in the Chinese perspective, the three-month old Russian operation in Ukraine, which began on February 24, has not changed the current imperatives of the international situation characterised by rapid development and profound transformation where “Some actors representing but the minority on the international scale continue to advocate unilateral approaches to addressing international issues and resort to force; they interfere in the internal affairs of other states, infringing their legitimate rights and interests, and incite contradictions, differences and confrontation, thus hampering the development and progress of mankind, against the opposition from the international community.” (February 4, 2022)

Third, Moscow and Beijing are circling the wagons, so to speak, in the Far East. Evidently, the Ukraine conflict is not preventing the U.S. from pushing ahead with the NATO expansion and there is every reason to believe that the alliance’s next ‘line of defence’ will be moved to the South China Sea. The Russian Foreign Minister Sergey Lavrov pointed out on Thursday that belligerent western politicians are stating publicly that the alliance should have global responsibility, and that NATO should be responsible for the security in the Pacific region. Moscow and Beijing cannot be faulted if their anticipate that major decisions in this regard are expected at the forthcoming NATO summit meeting in Madrid on June 28-30.

The Chinese Foreign Ministry spokesman said on Thursday that “NATO has publicly stated on many occasions that it will remain a regional alliance, it does not seek a geopolitical breakthrough and it does not seek to expand to other regions. However, in recent years, NATO has entered the Asia-Pacific region repeatedly. Some NATO member states keep sending aircraft and warships to carry out military exercises in waters off China’s coast, creating tensions and disputes. NATO has been transgressing regions and fields and clamoring for a new Cold War of bloc confrontation. This gives ample reason for high vigilance and firm opposition from the international community.”

Russia and China have given up hopes of any moderation in the U.S.’ adversarial mindset. Russian Foreign Minister Sergey Lavrov said today, “The West has declared total war against us, against the entire Russian world. Nobody even hides this fact now.” For the first time since 2006, Russia and China on Thursday vetoed a U.S.-drafted United Nations Security Council resolution to strengthen sanctions on North Korea.

In and address on Tuesday at Georgetown University, titled The Administration’s Approach to the People’s Republic of China, designed to rally the international community to deter and counter China, U.S. Secretary of State Antony Blinken stated that the coalition that Washington mustered to counter Russia in Ukraine presents a model both agile and well-resourced in how to face future challenges from China.