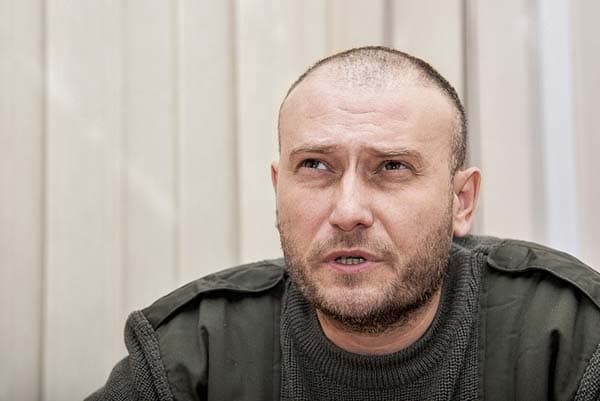 Eight years ago in Odessa, the neofascist element in Ukrainian politics, then led by Dmitro Yarosh’s Right Sector, burned to death, shot, and otherwise killed at least some 45 anti-Maidan regime picketers inside the Trade Union Building. The attack was coordinated by Right Sector and the then chairman of Ukraine’s parliament Andriy Parubiy, a founder of a neo-Nazi party. There is video footage of Parubiy meeting with the leading Right Sector operative in Odessa the day before the same operative could be seen shooting at people in the burning Trade Union Building an talking by walkie-talkie as police and fire units stood by observing the carnage. I enclose in the appendix below a series of videotapes of the attack and other sources. Right Sector twice took ‘credit’ for the terrorist pogrom. The RS website’s first claim of responsibility for the terrorist pogrom was effusive about the atrocity: “May 2, 2014 is another bright page in our national history.” It claimed responsibility by noting that “about a hundred members of ‘Right Sector’ and patriotic-minded Odessa residents countered the rebels” and that “Dmitro Yarosh ignored the ‘expedience’ of the election campaign to coordinate the action against the Russian aggression.” (Eugene Trofymenko, “ATO Po-narodnomu, Abo chomu ne Vladimir Putin ne vviv viyska,” Pravyi Sektor, 2 May 2014, pravyysektor.info; see also gordonhahn.com; pravyysektor.info; gordonhahn.com; pravyysektor.info; and vesti-ukr.com). No one was ever prosecuted for the Odessa terrorist pogrom, and Dmitro Yarosh, whose organization claimed responsibility for “coordinating” the attack became a candidate for the Ukrainian presidency. He was never investigated or forced to go into hiding.

The Odessa attack followed the 20 February 2014 Maidan neofascist wing’s snipers massacre that killed over 100 demonstrators and police and wounded many more, in which Right Sector and other neo-fascist Ukrainian groups played a leading role. This terrorist attack was blamed on Ukrainian President Viktor Yanukovych, leading to demonstrators’ seizing government buildings, including the Office of the President, forcing Yanukovych’s exodus from Kiev and removal from power. The Odessa attack was also preceded by the Maidan regime’s ban on the Russian language immediately after securing power in Kiev. This helped the Maidan coup to spark anti-Maidan uprisings in Crimea, Donbass, and Luhansk, including by police in Mariupol. The Odessa attack also followed the 14 April 2014 declaration by the new Maidan government in Kiev of an ‘anti-terrorist operation’ without making any attempt to negotiate with the Donbass rebels. The Odessa attack followed by one day the Ukrainian army’s killing of some 20 police–without any attempt at negotiations–in Mariupol, who declared their support for the anti-Maidan rebels in Luhansk.

The Odessa terrorist attack was ignored at the time by Western governments and described in Western media as a “fire that killed” etc. Not a single international or Western human rights organization investigated the crime. Here we have a second earlier microcosm of the present Russo-Ukrainian War. Already on full display were the Ukrainian Maidan regime’s uncompromising and violent approach to ethnic Russian and Russophone dissent and resistance, Western support for every radical step undertaken by the Maidan regime, and Western media citing only official Ukrainian sources and covering up the full truth about the blood-drenched and fascist-infested aspect of the ‘revolution of dignity’. Then NATO began training Ukrainian forces, some of who were former Right Sector members or members of other similar groups and gave direct assistance to similar groups.

These are uncomfortable facts that few in the West have had to face or ponder. Those who have understand that not only “Putin’s Russia” is to blame for the present war. Violence begets violence. Those who start the violence are often not the ones to put an end to it.

APPENDIX–Selected Sources on 2 May 2014, Odessa, Ukraine

Yes, the men “the right sector” and other Ukrainian patriots suffered losses in killed and wounded. However, the toll of Russian terrorists were much higher, namely the phenomenon of “separatists” in Odessa disappeared as a factor. All this–the merit of a united patriotic feelings of the public.

Now let’s look at the next thing. More than two months later, we were told: give up the action, for thus you will only provoke Putin. Hoping to start appropriate actions by the government, the public gave up the initiative in Crimea. As a consequence, the region was occupied.

In fact, it must be remembered truths: most oppressing the one who gives himself to oppress and not doing any resistance. Can Kremlin dwarf enter the army? Yes, absolutely. But not because its some “triggers”, but because he is a sick man and imperialist Russia perverted way. But our task–even now do the greatest possible resistance to our enemies. This resistance, by the way, can make undersized idiots recover from the Kremlin, as if he had remained at least remnants of common sense, he realizes that not only the saboteurs and mercenaries, but the regular army in Ukraine awaits a desperate guerrilla resistance. So–at least most of pacifism and action! Even under current law, according to the current Constitution, we have not only the right but also the duty to protect the sovereignty and territorial integrity of our country.Responsible citizens already had a successful terrorist operation. God willing–to be continued …

RUSSIAN TRANSLATION BY Kavkaz Tsentr, the website of the Chechen nationalist/jihadist Chechen Republic of Ichkeriya: www.kavkazcenter.com

Gordon M. Hahn, Ph.D., is an Expert Analyst at Corr Analytics, www.canalyt.com and a Senior Researcher at the Center for Terrorism and Intelligence Studies (CETIS), Akribis Group, www.cetisresearch.org. Dr. Hahn is the author of Tselostnost’: Wholeness in Russian Thought, Culture, History, and Politics (Europe Books, forthcoming in 2022) The Russian Dilemma: Security, Vigilance, and Relations with the West from Ivan III to Putin (McFarland, 2021), Ukraine Over the Edge: Russia, the West, and the “New Cold War” (McFarland, 2018), The Caucasus Emirate Mujahedin: Global Jihadism in Russia’s North Caucasus and Beyond (McFarland, 2014), Russia’s Islamic Threat (Yale University Press, 2007), and Russia’s Revolution From Above: Reform, Transition and Revolution in the Fall of the Soviet Communist Regime, 1985-2000 (Transaction, 2002). He also has published numerous think tank reports, academic articles, analyses, and commentaries in both English and Russian language media.

Dr. Hahn also has taught at Boston, American, Stanford, San Jose State, and San Francisco State Universities and as a Fulbright Scholar at Saint Petersburg State University, Russia and has been a senior associate and visiting fellow at the Center for Strategic and International Studies, the Kennan Institute in Washington DC, and the Hoover Institution.