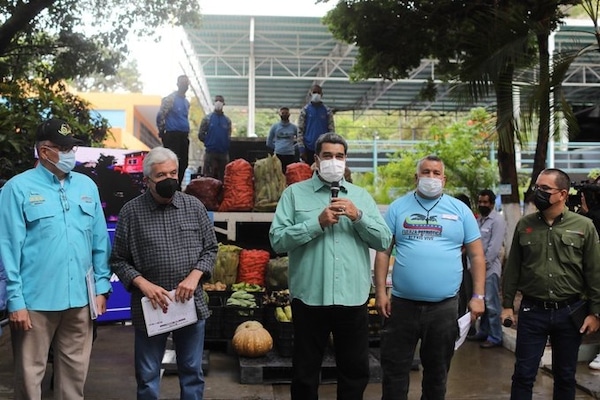 “I have ordered (Industry Minister) Hipólito Abreu to transfer everything that’s possible, including factories, so they can become communal productive experiences,” he said. Maduro likewise instructed Economy Vice Minister Tareck El Aissami to draw up a pilot scheme to “industrialize” urban barrios.

The Venezuelan president went on to approve a “Productive CLAP” program meant to support production efforts by the Local Supply and Production Committees (CLAP) which currently organize the delivery of subsidized food boxes to communities. Some 18,000 CLAPs will be incorporated, half of the total in the country.

Wednesday’s broadcast was shot at the working-class 23 de Enero barrio in western Caracas and showcased the productive efforts of the Panal 2021 Commune. The commune is pushing a number of initiatives, including a textile factory, pig rearing and tilapia farming, which is used as the primary source of protein in a commune-run canteen feeding local schoolchildren.

Robert Longa, Panal 2021 spokesperson, told Venezuelanalysis that Venezuelan barrios need an “industrialization and proletarianization process” but with a “class-based orientation.”

“We don’t just want bosses to come and set up factories in these neighborhoods,” he explained.

We are talking about collective factories, productive chains with the surpluses being used in favor of communities in a planned fashion.

Longa added that the productive activities needed to be backed up by education and training in order to counter the capitalist logic.

Another popular power experience featured was the Pueblo a Pueblo Plan, which brings together organized communities in the countryside and cities, among them the Panal 2021 Commune, to provide food grown with agroecological practices at fair prices. It also provides produce to dozens of school canteens in a joint program with the Education Ministry.

Laura Lorenzo, one of Pueblo a Pueblo’s organizers, stressed that planning is an essential task for social movements.

“The crisis and the pandemic have shown that we need to challenge consumption patterns as well,” she added.

This will allow us to generate greater food security and sovereignty.

Asked about Maduro’s pledge to transfer assets to grassroots collectives, Lorenzo said that collection centers would be key to strengthening and extending the distribution network while additionally giving organizations greater capacity to secure access to food in their communities.

Once a priority under the Hugo Chávez governments, communes and other popular power organizations have faced growing difficulties under the country’s economic crisis and US sanctions, including severely diminished state support.

The Maduro administration has sought to stabilize the economy via increasingly liberal measures such as tax breaks and removed forex controls. The government recently announced it will offer 5 to 10 percent stakes in utility companies, public banks and other state entities to private investors.

However, sectors within Chavismo have reiterated their commitment to socialist tenets such as social property and communal organization.

“We are fighting to create alternative distribution mechanisms in Venezuelan cities,” Hernández stated, adding that these efforts can “help deepen the assembly culture, planned consumption and participatory democracy.”

The 5 de Marzo Commune belongs to the Communard Union and also to the Pueblo a Pueblo network.