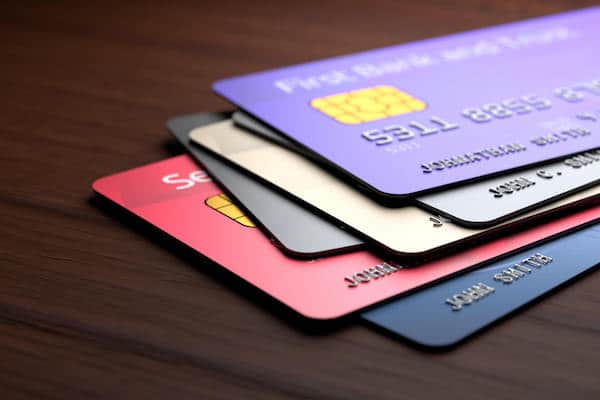 On Friday, May 6, the Federal Reserve released data showing that consumer credit (debt) has been accelerating since the fourth quarter of last year, with revolving credit (largely credit card debt) speeding up at an even greater pace since the third quarter of 2021. Total consumer credit grew by an annualized rate of 7% in the fourth quarter of last year, increased to 9.7% in this year’s first quarter, and expanded to 14% in March.

At the same time, revolving credit–the debt largely incurred through credit cards–grew 8.3% in the third quarter and 12.7% in the fourth quarter of 2021, and then 21.4% in the first quarter of this year, and an astonishing 35.3% in March!

Likewise, personal savings (as a percentage of disposable personal income) in April, 2022 reached a low unseen since September of 2008, a sure sign that people are dipping into savings to make ends meet.

To make matters worse, the Federal Reserve has, after more than a decade of unprecedented near-zero Federal funds target interest rates, raised the rate by half a percentage point, the greatest one-time increase in 22 years. Without a doubt, this will translate into higher credit card interest rates going forward, applied to a broad, rapidly growing mass of consumer debt.

Thus, the consumer is turning to the credit card–incurring debt–precisely when the cost of using the card is rising.

Higher interest rates are exploding mortgage rates–and dampening the over-heated housing market–in some cases, doubling this year. Because of rising mortgage rates, new home sales fell 16.6% in April from March, yet prices of homes continue to rise: the median existing home price rose 14.8% from April, 2021 to April 2022. While it’s dramatically costlier for the homebuyer to finance a new home, the price of a house continues to rise alarmingly–a perfect, classic housing-market bubble on the verge of bursting!

But the plight of the consumer gets worse: inflation continues to drive the cost of living for the average consumer higher and higher. For eight months, the annualized rate of inflation has been rising, culminating in an 8.5% rate in March and 8.3% rate in April–rates rarely seen in the last 40 years. Food prices alone–the most critical consumer goods for the least advantaged–are up 10.8% for the year ending in April, 2022, the greatest 12-month increase since November, 1980.

When inflation raised its ugly head last year, pundits and the Federal Reserve dismissed it as temporary, an anomaly caused by dislocations following the Covid pandemic. In response, I wrote:

Despite the admonitions of the central bankers and financial gurus, inflation seldom self-corrects. It rarely runs its course. Instead, inflation tends to gather momentum because all the economic actors attempt to catch up and get ahead of it.

Today, the central bankers and financial gurus agree that inflation will be around for some time, eroding the buying power of the average worker.

Despite the dire accusations in the business press that increases in worker compensation is driving inflation, the truth is the opposite. The average worker’s hourly income–adjusted for inflation–has dropped by 2.6% from last April! Whatever gains are made, they are soon devoured by inflation.

Nor does the future portend well. U.S. economic growth (GDP) sunk by 1.5% in the first quarter of 2022. As they did with the inflation crisis, pundits are shrugging this off as a self-correcting aberration. Yet, it is hard to imagine that the shrinking incomes, expanding debt, and fierce inflation will not take its toll on consumer confidence and spending, the factors that contribute far-and-away the most to U.S. growth.

A powerful indicator of roadblocks ahead for growth was the first-quarter collapse of labor productivity. Thus, labor productivity dropped by an astonishing 7.5% in the nonfarm business sector, the largest decrease since the third quarter of 1947–nearly 75 years ago! This collapse was brought on by a 5.5% increase in hours worked and a 2.4% drop in economic output (this is a broad measure of hours worked, including employees, proprietors, and unpaid family workers).

Companies continue to compete for employees and hire new employees, while the economic product shrinks, a formula–under capitalism–for future slowing accumulation, a coming decline in the rate of profit. Some of the U.S.’s largest retailers are reporting a decline in earnings.

This employment boom arose especially in the technology sector, where tech start-ups round up capital, borrow heavily, and hire furiously on the faith that profits will come later. Risk taking, future high return-seeking venture capitalists and the extremely low cost of borrowing, combine with a young, educated, competitive workforce to create the perfect conditions for inflated expectations and recklessness. With interest rates rising and uncertainty growing, the tech bubble is now leaking–hiring freezes, layoffs, and austerity are occurring or in the offing.

The technology sector is the most vulnerable sector of the capitalist economy because of a long period of easy access to capital and a long incubation period before returns on investment appear. Banks have become impatient for profits from the latest glitzy app, just as they gave up waiting for returns on their investment in promiscuous fracking a few years ago (that is being corrected with the greatly increased demand for energy in Europe as a result of the Ukraine war).

The tech sector’s troubles are reflected in equity markets, with the tech-based NASDAQ sinking faster, yet dragging down the S&P index as well. So far this year, as of May 20, the NASDAQ composite has dropped well over a quarter, with the S&P falling 19%, the S&P’s worst start to a year since 1970. With 8 straight weeks of losses, the Dow Jones Industrial Averages has incurred its worst stretch since 1932. For those whose only exposure to the stock market is their 401(k) retirement plans, stock performance is a disaster–investment advisors and managers have put a greater proportion of their funds into stocks (as opposed to other investment instruments like bonds) than in the past. This will be catastrophic for those planning to retire in the next few years.

Bonds, a usual safe haven when the markets are down, are also down for the year. And bitcoin, the darling of the financial hipsters and the crooks, has lost a third of its value this year.

Nonetheless, investors are buying in the face of a deepening bear market, seduced by the old saw of “buying on the dip”–buying stocks when they are at the bottom and, therefore, a bargain. Despite the market’s abysmal performance in March, individual investors bought a net $28 billion in stocks and ETFs–a record. This would appear the greatest exercise in wishful thinking since the 2007-2009 crash. Maybe it’s an omen!

Certainly, if equity markets continue to lose trillions of dollars of hypothetical wealth (the top six Standard and Poor’s companies lost $3.76 trillion of nominal value through May 20), the negative wealth effect will restrain spending, especially among those in the middle strata and in the bourgeoisie. Bloomberg estimates that global stocks have lost over $11 trillion in value: “Investors continue to reduce their positions, particularly in technology and growth stocks,” said Andreas Lipkow, a strategist at Comdirect Bank. “But sentiment needs to deteriorate significantly more to form a potential floor.”

What does all of this bad economic news mean?

The end of the Cold War brought not a peace dividend, but a gift to the victorious capitalist ruling classes. It was, after all, a struggle between capitalism and socialism, despite what the bogus left thought about Soviet socialism. Without question, the capitalist class understood the Western confrontation with the Soviet Union as an existential battle.

Capital’s imperative to reproduce itself took it into riskier and riskier places; the growing volume of accumulated capital became more difficult to productively reinvest; investors booked “profits” that were more and more contingent or hypothetical; the euphoria of hyper-accumulation invited greater and greater leverage; and the accumulation mechanism finally crashed under the weight of tenuous, hypothetical, and “fictitious” capital in 2007.

These actors have attempted to seal off the trash–bad investments, overvalued, unredeemable bonds, unrecoverable debt–from the healthier economy, while injecting massive volumes of no- or low-cost (near-zero interest rates) liquidity into a shell-shocked economy.

The raging inflation that emerged late in 2021 places the masters of the capitalist economic universe in a policy vice. To stem inflation, they must raise interest rates, which invariably dampens economic growth. But economic growth has already slowed–indeed, turned negative in the U.S. for the first quarter of this year. With so many economic indicators declining or going negative, rising interest rates will only accelerate the slowdown of consumer spending, productivity, wage growth, investment, and social spending, while increasing debt and its costs.

This is truly a bleak picture and it’s not clear what useful tools remain in the hands of the policy makers to brighten it. The NATO/Russia/Ukraine blunder of a disruptive, grinding war can only worsen global economic conditions for everyone except the arms makers.

We can only hope that people will make the connection: capitalism breeds misery and war.