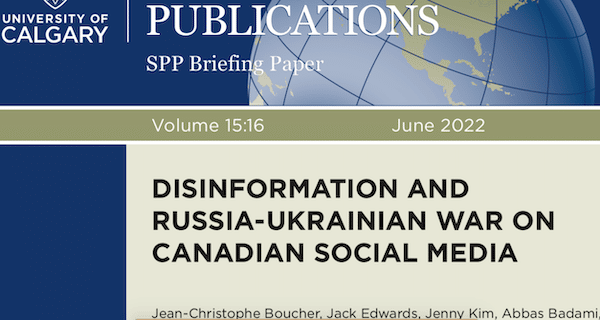 A military funded academic, working at a school launched by Condoleezza Rice, claims leftist and anti-war journalists engage in Russian disinformation. His report doesn’t provide any evidence or refute anyone’s argument, but the legacy media laps it up.

On Thursday the University of Calgary School of Public Policy released “Disinformation and Russia-Ukrainian war on Canadian social media”. With the exception of a blog by Dimitri Lascaris that dismantled its absurd ideological premises, coverage of the report was almost entirely uncritical. Headlines included: “Canada target of Russian disinformation, with tweets linked to foreign powers” (Globe and Mail), “Why is Canada the target of a Russian disinformation campaign?” (CJAD Montréal) and “Canada is target of Russian disinformation, with millions of tweets linked to Kremlin” (City NewsToronto). The report’s lead author Jean-Christophe Boucher was a guest on multiple TV and radio outlets, labeling those who question the role of NATO expansion, the far Right and 2014 coup against an elected president in understanding the war in Ukraine “useful idiots” of Vladimir Putin.

Boucher and his co-researchers claim to have mapped over six million tweets in Canada about the conflict in Ukraine. They claim over a quarter of the tweets fall into five categories they label “pro-Russian narratives”. But they don’t even attempt to justify the five categories. Instead, they simply list the most prominent commentators and political figures promoting these ideas under the rubric of “Top Russian-influenced Accounts”. The list includes leftist journalists Aaron Maté, Benjamin Norton, Max Blumenthal, Richard Medhurst and John Pilger. But no evidence is offered to connect these individuals to Russia.

While “Disinformation and Russia-Ukrainian war on Canadian social media” reveals little, it has served its political purpose. It will further insulate Canadian officials from criticism of their policies by suggesting anyone questioning Ottawa’s Ukraine/NATO policies are part of a Russian disinformation campaign.

Boucher is a product of the Canadian military’s vast publicly financed ideological apparatus, which I detail in A Propaganda System: How Canada’s Government, Corporations, Media and Academia Sell War and Exploitation. He has been a fellow at the military and arms industry funded Canadian Global Affairs Institute and Dalhousie Centre for the Study of Security and Development. He advocates theories amenable to the military’s interests, including “strategic retrenchment: falling back on the people you can really trust”, which is a sophisticated way of saying Canada should deepen its alliance with the US empire. His academic profile says Boucher “is a co-lead of the Canadian Network on Information and Security, funded by the Department of National Defence” while his Canadian Global Affairs Institute bio notes that “he is currently responsible for more than $2.4M of funding from the Department of National Defence (DND) to study information operations.”

The military put up the money to establish the Canadian Network on Information and Security (CANIS) as a joint project between the University of Calgary’s Public Policy Institute and Centre for Military, Security and Strategic Studies. A 2020-21 DND report labels CANIS among three initiatives “launched to tackle DND/CAF’s most pressing challenges.”

The University of Calgary School of Public Policy is essentially a right-wing think tank housed at a university, according to Donald Gutstein, author of two books on Canadian think tanks. It was set up in 2008 with $4 million from leading oil and gas lawyer James Palmer and launched at a $500-a-plate gala that included a keynote speech by George W. Bush’s Secretary of State Condoleezza Rice.

The supporters of militarism would like us to believe that anyone criticizing Canada and NATO’s policies on Ukraine is a Russian agent or a useful idiot. But people being paid to promote opinions favourable to arms makers, the US empire and powerful individuals should have little credibility when it comes to criticizing the motivation of others.

On Monday’s Canadian Foreign Policy Hour (6.13.2022) I will discuss “Disinformation and Russia-Ukrainian war on Canadian social media” with Canadian born journalist Aaron Maté, who is listed number two in its “Top Russian-influenced Accounts”. We will also discuss the US/UK/Canada’s role in sabotaging negotiations to end the war in Ukraine.