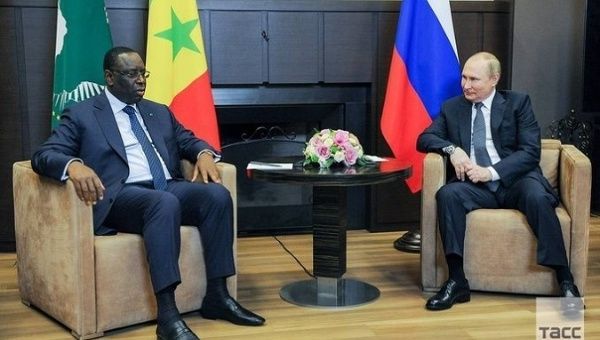 In a special TV interview on Friday evening following a meeting with African Union head Macky Sall in Sochi, Putin accused Western leaders of trying “to shift the responsibility for what is happening in the world food market”. (Photo: Twitter @ferozwala)

The President of Senegal and of the African Union, Macky Sall, held a meeting with his Russian counterpart Vladimir Putin on Friday and called for the lifting of sanctions imposed on Moscow, specifically those affecting the export of wheat and fertilizers.

During the meeting, held in the city of Sochi, the Senegalese president declared that “there are two main problems: the (food) crisis and the sanctions. We must work together to solve these problems so that sanctions on food products are lifted.”

The Russia-Ukraine conflict has triggered an acute food shortage in Africa. On Friday, Russian President Vladimir Putin met with Senegalese President Macky Sall, who is also head of the African Union. The talks focused on ways to resume shipments of Russian and Ukrainian grain. pic.twitter.com/gB2E6j7zww

Sall highlighted the relationship that exists between Russia and African countries, recalling that the Eurasian nation “played a tremendous role in the independence of the African continent and this will never be forgotten.”

For his part, President Putin stressed that his country has always supported Africa and backed it in its struggle against colonialism.

“Africa’s role on the international stage and in the political arena in general is growing. We believe that Africa as a whole and its countries, with which we traditionally share friendly relations, have enormous potential and we will continue to develop our relations,” he emphasized.

The most vulnerable are at the moment at war but one of the least which is Senegal visited Russia .
What’s really damaging North Africa are the sanctions on Russia. pic.twitter.com/e1vn1tm1M0

After the beginning of the special military operation in Ukraine on February 24, Western countries imposed several packages of sanctions against Moscow. According to the Russian president, these measures aggravated the food crisis in the world, affirming that this problem began to be generated during the pandemic.

Russia and Ukraine together account for 29 percent of the world’s wheat exports, which is why African nations depend on this grain.

Especially now that the World Meteorological Organization (WMO), the World Food Program (WFP) and the Food and Agriculture Organization of the United Nations (FAO) have warned of a high risk of starvation in countries such as Somalia, Kenya and Ethiopia, due to the extreme drought they are experiencing.