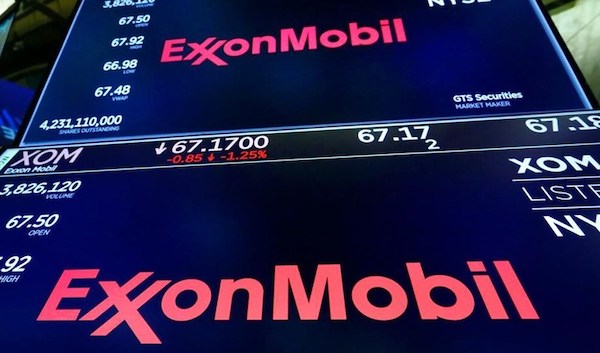 The ExxonMobil logo featured on the screen at the New York Stock Exchange, 2019. (Photo: AP)

U.S. oil giant ExxonMobil responded to U.S. President Joe Biden’s appeal for solutions regarding the energy crisis by urging his administration to enact emergency measures, such as suspending maritime restrictions, in the hope of boosting production.

In a letter to the oil industry released earlier in the day, Biden pressed major energy companies to take immediate actions to increase the supply of gasoline, diesel, and other refined products.

Earlier, on Wednesday, ExxonMobil released a statement that they,

have been in regular contact with the administration to update the President and his staff on how ExxonMobil has been investing more than any other company to develop U.S. oil and gas supplies. This includes investments in the U.S. of more than $50 billion over the past five years, resulting in an almost 50% increase in our U.S. production of oil during this period.

The oil giant also stated that,

In the short term, the U.S. government could enact measures often used in emergencies following hurricanes or other supply disruptions-such as waivers of Jones Act provisions and some fuel specifications to increase supplies.

The Jones Act restricted all shipping between U.S. ports to be conducted solely by vessels carrying the American flag. In 2021, in May, the U.S. waived the Jones Act twice in order to meet fuel demand. At the time the country was struggling with supply following the shutdown of the Colonial Pipeline as a result of a cyber-attack.

As for a long-term solution, ExxonMobil suggested the U.S. government promote “clear and consistent” policies that support the development of resources. Some of those developments include but are not limited to, regular and predictable lease sales, streamlined regulatory approval, and support for infrastructure such as pipelines.

The national average price for regular unleaded gas in the United States rose to $5.016 per gallon on June 14th, according to data from the American Automobile Association (AAA), which tracks prices at more than 60,000 gas stations across the country.

Historically, the highest prices have been recorded in California, up to $6.44 per gallon, and the lowest in Georgia, at $4.49 per gallon.

In reaction to skyrocketing energy prices and the war in Ukraine, countries around the world are pouring money into new natural gas plants, which might undermine any hope of reducing global warming.

According to a recent study, governments such as the United States, Germany, the United Kingdom, and Canada are investing in new gas production, delivery, and consumption in order to censure Russia.

The findings of the Climate Action Tracker research initiative show a rush for gas that will lock countries into the use of fossil fuels at a critical time when scientists have warned that a decisive shift to lower-carbon alternatives within the next few years is the only way to avoid climate breakdown.

ExxonMobil, the climate crisis, and inflation

In May of this year, Exxon was accused in Healey’s lawsuit of violating the state’s consumer protection laws by concealing what it knew about the climate impact of burning fossil fuels for decades.

The state also claims that the company misled investors about the risks that global warming poses to its business.

Exxon alleged that the lawsuit violated legislation prohibiting so-called strategic lawsuits against public participation, or SLAPPs, which are used by wealthy individuals and corporations to silence critics. The Massachusetts Supreme Judicial Court ruled that anti-SLAPP laws do not apply to government cases.

The Massachusetts Supreme Court ruled, on May 25th, that ExxonMobil, the largest oil company in the United States, must stand trial on charges of lying about the climate crisis and covering up the fossil fuel industry’s role in worsening environmental devastation.

It is worth mentioning that the largest fossil fuel businesses in the world made a major profit: $93.3 billion, to be precise, following the global chaos following the war in Ukraine.

While corporates have been cashing up massive numbers, the world has been dealing with unprecedented inflation.

Climate activists and environmentalists have called the profits “obscene,” arguing that fossil fuel profits would not be so rewarding if governments handled the climate crisis as they should.

The increasing oil profits are alarming given that scientists have repeatedly warned that the world should move towards less dependency on fossil fuels in order to avoid various disasters, including heatwaves, drought, and other climate emergencies.