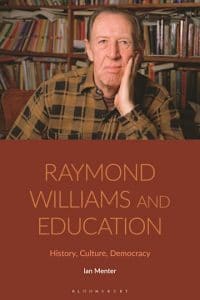 In the 1950s and early 1960s, a group of remarkably talented left-wing intellectuals (almost all men) emerged in Britain, focusing both upon the radical interpretation and development of the core disciplines of the humanities: literature and history, and to a lesser extent, politics and philosophy; and also upon socialist political activism. Many were initially members of the Communist Party (CP), or close ‘fellow travellers’. However, after Khrushchev’s 1956 revelations about the crimes of the Stalinist regimes, followed a few months later by the suppression by Soviet armed forces of the Hungarian uprising, almost all left the CP. (Eric Hobsbawm was the major exception, remaining a CP member until the Party’s demise.)

After 1956, this fairly loose, and in some respects diverse, group became known as the (first) New Left, among whom Raymond Williams was one of the most prominent and influential figures. In particular, his seminal works – Culture and Society (1958), The Long Revolution (1961), and The Country and the City (1973) – had a profound influence upon English Literature and the ways in which literary criticism was practised, and upon the development of Cultural Studies as a recognised field of study. (As implied above, issues of gender – or for that matter, ethnic minority – inequality did not feature to any extent in the concerns of this political formation.)

Much has been written about Williams and the important contributions he made to the political culture, to the intellectual foundations of a new socialist politics, and to the re-formulation of a vibrant, humanistic socialism. But relatively little has been said of the central role that ‘education’ per se played in both his work and his life. In this book, Ian Menter makes a convincing, well-argued case for placing ‘education’ at the heart of Williams’s concerns.

Menter is well qualified to undertake such a role: he is a senior and well respected educationist, an Emeritus Professor of Education at Oxford, and a former Chair of BERA (British Educational Research Association). Not surprisingly, his chapter on the ‘History of Schooling in England – Education in The Long Revolution’, is authoritative and comprehensive. I am sure he is right about Williams’s important influence in this field, although, at this distance in time, Williams’s insights and analyses seem unexceptionable, if not commonplace. Menter clearly regrets, as Williams did towards the end of his life, the increasing dominance of the ‘industrial training’ ideology of educational policy in Britain and elsewhere in the Western world. Rather more on the negative impact of this dominance in the ‘real world’ contexts of both schools and post-school institutions, would have been welcome.

Williams made a distinctive and fundamental contribution to the development of ‘cultural studies’. Of the three ‘founding fathers’ of this new field – E P Thompson, Richard Hoggart and Williams – it is Williams who, in this instance, was the most important figure. Indeed, in one sense, his central concern intellectually was with the definition, explanation and appropriate implementation, educationally and politically, of culture. (His readable, and endlessly useful, book Keywords (1976) was one significant forum for this discussion.) Menter is very good on this complex area of Williams’s work. Not only does he analyse clearly Williams’s relationship with and development from F R Leavis’s ‘cultural criticism’ school, he also gives due attention to writers such as Tom Steele and Jim McGuigan who have emphasised, as Williams did himself, the roots of cultural studies within liberal adult education, mainly as provided through the WEA, often in conjunction with university extramural departments.

In an earlier chapter there are also perceptive and illuminating discussions of Williams’s literary criticism: his high regard for D H Lawrence, his discussion of the ‘industrial novel’ (George Eliot, Dickens, Mrs Gaskell), and his more theoretical Marxism and Literature (1977) with its delineation of Williams’s concept of ‘cultural materialism’.

All these aspects of Menter’s book are of a high quality and undoubtedly add to our appreciation of Williams and his work. However, there are, in my view, other parts of his book which are more problematic. In an early chapter, Menter devotes considerable attention to Williams’s novels. Williams certainly attached great importance to his works of fiction; and, in their quasi-autobiographical form, they do add to our understanding of Williams’s formative years and thus provide insights into his subsequent perspectives. His best known novel, Border Country (1960/1988) is certainly a good read and provides a vivid picture of Williams’s early years. But it is surely doubtful whether this, or his other novels, constitute a significant contribution to twentieth century fiction. Menter does not raise such issues but, in effect, takes Williams’s own estimation uncritically. (There are interesting parallels here with his fellow New Left figure, E P Thompson, who attached great importance to his – now almost forgotten – poetry.)

Similarly, Menter appears to be uneasy in dealing with the more directly political aspects of Williams’s work, notably the complex and conflicted nature of the first New Left and Williams’s problematic role within it. Although Williams was undoubtedly a major intellectual figure in the first New Left, he almost always appeared to be somewhat ‘at arm’s length’ from the movement: in contrast in particular to E P Thompson. A somewhat ‘shadowy’ figure, then, in this context? Perhaps. But, on the other hand, Stuart Hall, the leading younger figure in the first New Left, recalled that, whereas he found Edward and Dorothy Thompson ‘a formidable couple’, and also felt that Edward lacked empathy with Hall’s concern over colonialism and Hall’s own racial identity, he found Williams ‘incredibly approachable … much closer to my own formation than Edward had ever been’.

It could be argued, of course, that these directly political issues have little to do with Menter’s focus upon education. But the first New Left and its politics were indissolubly connected to the development of an appropriate and pervasive radical, social purpose, liberal adult education. Most of the key figures in the first New Left were, significantly, centrally involved in adult education in one context or another: Thompson, Hall, Raphael Samuel, Barratt Brown, Williams himself, and perhaps more tangentially, Hobsbawm.

The absence of any serious analysis of any of this, apart from a brief mention of Williams’s role in writing The May Day Manifesto, in 1968, is thus a serious omission.

More telling, though tangential to Menter’s main focus, is his section on Orwell: tangential because Orwell wrote very little on education specifically. To my knowledge, his only substantial piece on an educational theme is his vivid and still horrific description of his early school days, in his essay, “Such, Such were the Joys”. But Menter fails to mention this, and concentrates upon Williams’s book, Orwell (1971). Although this study is, as always with Williams, perceptive and in some senses empathetic to Orwell’s political and moral dilemmas in the fraught circumstances of the 1930s and 1940s, it is a deeply flawed work: in some respects, an unworthy polemic, as Christopher Hitchens demonstrated in detail in his Why Orwell Matters (2002). Significantly, in his lengthy and impressive bibliography, Menter includes neither Hitchens’s book nor any of the numerous studies of Orwell –nor indeed the latter’s essays and journalism.

This uncharacteristic ‘blind spot’ was almost certainly due in part to Williams’s association with the CP. Like all CP members of this and later periods, most notably E P Thompson, Williams had an irrational antipathy to Orwell. This is in sharp contrast, on the left, to all libertarians and anarchists, most Trotskyists, and those on the Labour left interested in socialist ideas.

But it is also due to Williams’s somewhat prickly sense of social class, and his suspicion, even resentment, at Orwell’s Etonian background. (Menter notes that ‘in the final analysis, Williams sees deep elements of class superiority emerging from his [Orwell’s] writing. Williams … came to reject Orwell to such an extent that he could no longer read his work’. (108) Social class was not only central to Williams’s theorisation of different aspects of his academic work, and to his fiction: it was also central to his self-perception. He was, as Menter observes, always deeply conscious of his working-class origins and of the ambivalences resulting from his ‘upward social mobility’. His career established him as undoubtedly upper middle class: he spent virtually his whole working life at Oxford and Cambridge Universities; he sent his children to fee-paying, selective schools; and of course he too benefited from educational selection at an early age. He nevertheless continued to regard himself as, in some sense, ‘working class’. Not surprisingly, given these deep tensions-psychological, cultural and political – he was on occasion, ultra-sensitive to ‘class issues’.

Williams was, then, in some ways, a conflicted man; and this perhaps explains his otherwise puzzling distance from the political activism of the first New Left: compare, for example, Williams to Thompson, Hall and Ralph Miliband, all of whom in their various ways, and with varying levels of success, devoted much energy to political activism.

Menter’s book would have benefited from discussion of these and related issues. The Williams that emerges from his analyses is an uncomplicated ‘force for good’. The truth, as so often, would seem to be more complex. Nevertheless, this well-written and accessible book bears eloquent testimony to the importance of Williams as an absolutely key figure – in literary criticism, in cultural studies and in the development of innovative, humanistic approaches to education in all its forms. Few on the left would dissent from Menter’s conclusion that Williams’s commitment to ‘permanent education … is an essential part of addressing the future and securing safety, stability, security, justice and equity for the citizens of the globe’. (182)