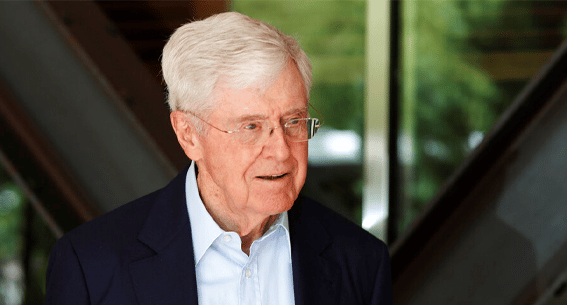 Later this month, the Supreme Court will hear oral arguments in West Virginia v. Environmental Protection Agency. The case could decide whether the EPA is allowed to issue rules to reduce greenhouse gas emissions–and comes at a time when scientists are warning that governments must rapidly decarbonize the planet in order to avoid catastrophic weather-related impacts from climate change.

If the court sides with the Koch groups, the chief environmental regulator in one of the world’s largest carbon-emitting nations would be barred from enacting many policies to combat climate change.

The Koch network helped arrange the court’s current composition–and now at least five nonprofits tied to Koch have filed amicus briefs in the West Virginia case pressing justices to determine that the agency does not have the authority under the Clean Air Act, the landmark 1970 air quality law, to set new limits on greenhouse gas emissions.

Fossil fuel interests are hoping that the Supreme Court will deliver “a broad rule that the EPA can’t use the Clean Air Act to tackle any significant new problem without going back to Congress each time for new, and very detailed, legislation,” noted David Doniger, senior strategic director of the Natural Resources Defense Council’s Climate & Clean Energy program.

They’re counting on lobbyists and dark money to keep Congress gridlocked, so that those new laws are impossible to pass.

There’s little chance that Congress will step in to fill the regulatory void if the Supreme Court guts the Clean Air Act. Democrats spent most of last year debating and ultimately failing to pass a climate spending bill. If the party loses control of Congress this year, Democrats likely won’t be able to pass any substantive new climate measures for the rest of the Biden presidency.

A Flotilla Of Amicus Briefs

Koch runs Koch Industries, the world’s largest privately held fossil fuel company–and one that has a vested interest in a Supreme Court ruling that blocks the EPA from regulating greenhouse gas emissions. Koch is also among the biggest financiers of the American conservative movement–and his political network has played a significant role in shaping the nation’s highest court.

The Koch network’s chief political arm, Americans for Prosperity, led campaigns supporting the confirmation of all three of Trump’s Supreme Court justices: Amy Coney Barrett, Brett Kavanaugh, and Neil Gorsuch. Barrett’s confirmation was a particularly significant win for the fossil fuel industry–she has familial ties to Shell Oil, and refused to recuse herself in a case involving that oil giant.

Despite the Koch network spending on their confirmation battles, none of the trio decided to recuse themselves last year when the court ruled in favor of the Koch organization’s charitable affiliate, the Americans for Prosperity Foundation, in a decision invalidating California’s requirement that nonprofits disclose their donors to state regulators.

The Koch network isn’t just interested in stacking the court with its preferred justices; it is also working to sway the court’s decisions. As Sen. Sheldon Whitehouse (D-R.I.) has documented, organizations funded by Koch will often file a “flotilla of substantively similar amicus briefs” with federal courts seeking to influence judicial decisions that could impact the billionaire’s financial operations.

Recently, the operation began targeting the West Virginia case, which is scheduled to be heard by the Supreme Court on February 28. In December, Koch’s Americans for Prosperity Foundation filed an amicus brief in the case arguing that the EPA should not be permitted to “impose its will on the nation through regulatory diktat.”

“It is not this court’s role to choose between competing visions for how these subjects should be addressed. Instead, this case is about which branch of government, under the existing constitutional structure, is entitled to make major policy decisions of vast political and economic importance, like those at issue here, and by what process,” the foundation wrote.

At the federal level, the answer is Congress, through duly enacted legislation, subject to constitutional constraints on federal power.

Koch co-founded the Cato Institute, a libertarian think tank. The Charles Koch Foundation has donated more than $11 million to the Cato Institute since 2012, while the Charles Koch Institute has contributed $2.4 million, according to IRS tax returns. Cato’s brief was submitted jointly with the Mountain States Legal Foundation, which has received several five-figure donations from Koch’s foundation in recent years.

The Charles Koch Foundation and the Charles Koch Institute have delivered $376,000 to the Competitive Enterprise Institute since 2012, tax returns show. The organization has also received funding from oil and gas company Marathon Petroleum and the fossil fuel lobbying group American Fuel & Petrochemical Manufacturers.

Meanwhile, some Democrats want to stop dark money groups from weighing in on such cases without revealing their financial backers. Whitehouse and several progressive Democrats, including Sen. Bernie Sanders (Ind.-Vt.) and Rep. Alexandria Ocasio-Cortez (D-N.Y.), have offered legislation that would require groups filing amicus briefs to disclose their major donors.

“The American people deserve to know who’s paying to influence their courts,” said Whitehouse in a press release.

If a big-money special interest has a stake in a case, everyone ought to know that, from the judge rendering the decision to the people living with the precedent the case could set.