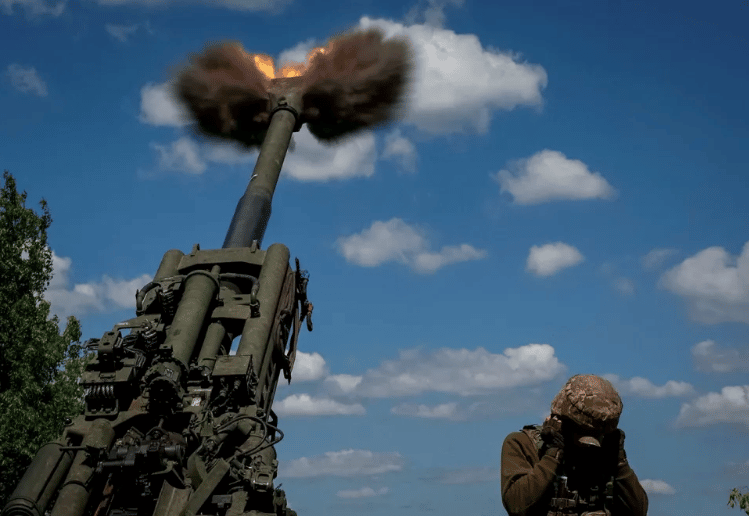 Ukraine service members fire a shell from a M-777 Howitzer from Ukrainian position in Peski toward Donetsk. [Source: reuters.com]

Sending Ukraine a $300 million shipment of powerful M-777 howitzers is a lobbying triumph for BAE Systems, one of the many war industry corporations fattening on the death and destruction of the Ukraine war

On June 15, the Biden administration announced that it was providing an additional $1 billion in military aid to Ukraine in a package that includes shipments of M-777 howitzers, ammunition and coastal defense systems.

While that announcement was being made, the Ukrainian army was shelling Donetsk, the capital of the Donetsk People’s Republic, with the U.S.-supplied howitzers along with French guns, according to The Donbass Insider, killing five civilians and wounding seven firefighters.

The attacks were being carried out from Ukrainian positions in Peski, a village not far from Donetsk airport.

According to a video produced by journalist Patrick Lancaster, a U.S. naval veteran who has reported on the war in eastern Ukraine over the last eight years, there were no military targets in the areas shelled by the Ukrainian army, only civilians.

Consistent with a society that used military technologies to subdue the native populations, most Americans subscribe to the belief that new superweapons can deliver salvation in wars.[1]

They ignore the dictum of German theorist Karl von Clausewitz that war is “politics by other means,” meaning that victory can only be achieved by aligning with the right side—which does not appear to be the case for Ukraine.

The New York Times characterized the M-777 howitzer—which made its debut in Afghanistan in 2005—as “the most lethal weapon the West has provided [to Ukraine] so far.”

Highly portable by land, air and sea, it can fire as far as 40 kilometers away or 25 miles—further than Russia’s primary artillery system—and is capable of striking within 10 meters of a target when coupled with the M982 Excalibur precision guided munition, which Canada has sent to Ukraine.[2]

The flat, rolling plains of the Donbas are particularly suited for artillery fire compared with the shoulder-mounted Javelin missiles that were effective in neutralizing enemy forces in the first months of the war when Russia was targeting densely populated cities like Kyiv, senior U.S. defense officials have said.

The American Legion reported that the United States had already sent 108 M-777 howitzers to Ukraine before the most recent aid package was signed by President Biden.

The Pentagon claimed that the howitzers had an immediate impact upon their arrival on May 8, enabling the Ukrainians to “go on the counter-offensive in the Donbas” and “take back some towns the Russians had taken in the past.”

Colonel Roman Kachur, commander of Ukraine’s 55th Artillery Brigade, told The New York Times that “this weapon [the howitzer] brings us closer to victory. With every modern weapon, every precise weapon, we get closer to victory.”

However, The New York Times reported on June 20 that Russian forces “appeared poised to tighten the noose around thousands of Ukrainian troops near two strategically important cities in the Donbas,” mounting an “assault on Ukrainian front lines.”[3]

So a Ukrainian victory appears far off.

The Russian Interior Ministry reported that it had destroyed U.S.-made howitzers through use of attack drones.

Former UN weapons inspector Scott Ritter wrote that Ukrainian dependence on Western artillery they were unfamiliar with resulted in a ten-fold disparity in firepower with Russia which was destroying Ukrainian defensive positions with minimal risk to its troops.

NATO Secretary-General Jens Stoltenberg warned that the Ukraine War could “last for years,”meaning we are looking at another Vietnam.

The M-777 howitzer is made by the U.S. division of BAE Systems, the largest arms manufacturer in Europe, which has supplied Ukraine with 400,000 rounds of munitions, anti-tank guided missiles and armored vehicles equipped with anti-aircraft missiles.

Former CIA Director Gina Haspel, who observed waterboarding at a CIA black site, sits on the company’s Board of Directors.

In March, BAE Systems ironically bankrolled an arms fair in Riyadh, Saudi Arabia, where sanctioned Russian weapons makers showed off some of the weapons they were using in Ukraine, including tanks, helicopters and drones.

During the 2020 U.S. election campaign, BAE Systems donated $569,202 to Democratic Party candidates, and $452,594 to Republicans, according to opensecrets.org.

This amounts to chump change for the company: Shares in BAE Systems have reached an all-time high since the Russian invasion of Ukraine, rising by 28 percent over ten weeks to give BAE a stock market value of £24 billion and putting it among the largest 25 companies in the Financial Times Stock Exchange.

In a blatant conflict of interest, a number of Tories in England’s Upper House of Parliament—notably Lord Glendonbrook, Viscount Eccles and Lord Sassoon, and unaffiliated peers Lord Lupton and Lord Gadhia—each own shares of at least £50,000 in BAE Systems.[6]

Samuel Perlo-Freeman, research coordinator for the campaign against the arms trade, said that BAE Systems “like other major world arms companies, are seeing their share prices soar in response to the war on Ukraine, as European countries prepare to massively rearm, doubling down on the very militarism that has created so much death and suffering in Ukraine, Yemen and elsewhere.”[7]

Which really means that, by antagonizing the Russians, great profits can be made in the Ukraine War and any compromise or diplomatic solution that might end the war should be rejected.