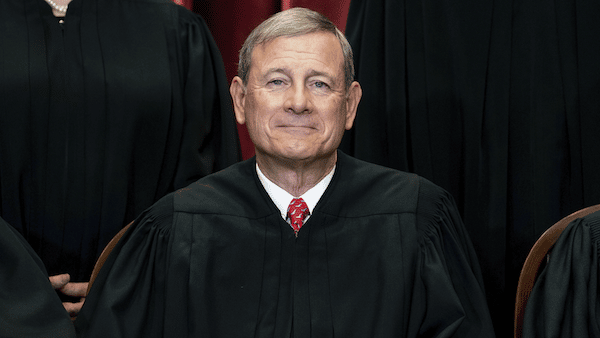 Amid all the high-profile rulings dominating the headlines, a more obscure but far-reaching decision slipped through the Supreme Court, even if it was barely part of the news cycle. It is the case that culminates Chief Justice John Roberts’ crusade to fully legalize corruption–and construct a political system that permanently produces all the extremist rulings now repealing the 20th century.

Cases like this new one, FEC v. Ted Cruz For Senate, don’t get much attention because they seem esoteric and technical. But so many of the more infamous legacies of the Roberts Court–crushing workers, rescinding reproductive rights, shielding big business from accountability, restricting voting rights, eviscerating gun control, complicating the fight against climate–can be traced back to its campaign finance rulings, which equate liberty with corruption.

That Roberts’ doctrine has given oligarchs, corporations, and their front groups a First Amendment right to bankroll political campaigns and now–thanks to the Cruz case–directly funnel cash to politicians’ personal bank accounts. The return on such investments has been all the right-wing laws, obstructions, and judicial edicts that have spewed forth from Washington over the last decade.

Since Roberts was confirmed in 2005 with bipartisan support, corporate media has typically portrayed him as a thoughtful moderate, to the point where polls have shown a majority of Democrats like him. The media has continued venerating Roberts as an earnest victim of the court’s hard-right turn rather than a perpetrator–even after he voted to uphold the extreme Mississippi law banning most abortions at 15 weeks, including in cases of rape or incest.

Left out of this hagiography is the story of Roberts as the bag man behind the curtain–the mastermind engineering the entire superstructure undergirding the court’s extremism.

No matter the controversy of the day, you cannot really understand what’s going on in politics unless you first understand Roberts’ campaign that constructed an entire legal architecture of corruption–allowing moneyed interests to buy the presidency, Congress, and the courts.

Roberts’ plot crescendoed with the Cruz case, but that recent decision was part of a much larger 12-year crusade with a singular objective: creating a government of, by, and for the rich.

“Does Not Mean That These Officials Are Corrupt”

Officially, the United States gets decent marks on anti-corruption indices in comparison to other countries. But that’s because while there is plenty of extralegal graft in the developing world, America made corruption legal by enshrining the right to buy lawmakers and legislation.

This is the real American exceptionalism–and it started with the 1976 Buckley v. Valeo decision equating money with speech. That ruling created the special class of “issue ads” that front groups still swamp the airwaves with today. One group operating in this space is the conservative dark money network led by Leonard Leo, former President Donald Trump’s judicial adviser, that built the Supreme Court’s 6-3 conservative supermajority.

However, the normalization of corruption did not accelerate until the court was taken over by Roberts, who previously represented the U.S. Chamber of Commerce–the organization that converts corporate money into government policy.

Under Roberts’ leadership, the court has issued four landmark rulings declaring that the purchase of “influence and access embody a central feature of democracy” (that’s a direct quote from the court).

It started with 2010’s Citizens United. That ruling officially prohibited limits on so-called “independent expenditures,” which not only triggered record amounts of cash flooding into elections, but also narrowed the legal concept of corruption.

Under the new precedent, illegal corruption is now only cash stuffed in an envelope and exchanged for explicit favors–but not most soft forms of purchased influence and access. Industries can use super PACs and “independent expenditures” to effectively bankroll the campaigns of compliant legislators–as long as the quid pro quo is not explicitly written down.

“That [donors] may have influence over or access to elected officials does not mean that these officials are corrupt,” the majority stated.

Independent expenditures, including those made by corporations, do not give rise to corruption or the appearance of corruption. And the appearance of influence or access will not cause the electorate to lose faith in this democracy… Ingratiation and access, in any event, are not corruption.

Four years later, conservative justices issued the McCutcheon ruling that struck down limits on aggregate amounts of cash that individual donors can funnel to candidates and political parties. Once again, the basis of the ruling was the insane idea that corruption is only explicit quid-pro-quo favors, rather than the perpetual purchase of access and influence.

“Spending large sums of money in connection with elections, but not in connection with an effort to control the exercise of an officeholder’s official duties, does not give rise to such quid pro quo corruption,” the majority ruled. “Nor does the possibility that an individual who spends large sums may garner ‘influence over or access to’ elected officials or political parties.”

A year after that, Roberts’ court used the McDonnell ruling to legalize the very quid-pro-quo corruption it previously said was still prohibited. In that case, the court stipulated that yes, a nutritional supplement industry executive delivered “$175,000 in loans, gifts, and other benefits” to Virginia Republican Gov. Bob McDonnell in exchange for him setting up meetings with state officials to promote the company’s products. However, the court insisted that such a quid pro quo is legal, and then berated law enforcement officials for trying to uphold anti-corruption laws.

“Setting up a meeting, calling another public official, or hosting an event does not, standing alone, qualify as an ‘official act,” Roberts wrote in the unanimous opinion. “Our concern is not with tawdry tales of Ferraris, Rolexes, and ball gowns. It is instead with the broader legal implications of the government’s boundless interpretation of the federal bribery statute.”

That trio of rulings was a prelude to Roberts’ new FEC v. Ted Cruz For Senate ruling–a piece of judicial performance art designed to let big donors funnel cash not just into politicians’ campaigns, but also into their personal bank accounts.

At issue was a 20-year-old law that prohibited elected officials from using more than $250,000 of post-election campaign donations to repay personal loans they give their campaigns. That may seem arbitrary, but the point of the statute was straightforward: It prevented politicians from loaning their campaigns unlimited amounts of money at profitably high interest rates knowing that favor-seeking donors would pay the lucrative vig after the election–when the politician is positioned to deliver legislative favors.

Such a scheme may seem like a far-fetched subplot from The Distinguished Gentleman or Thank You For Smoking, but it’s all too real.

Two decades ago, donors helped a Democratic lawmaker rake in more than $200,000 of interest on a personal loan that she made to her own campaign. Dissenting judges in the Cruz case documented situations in Ohio, Alaska, and Kentucky where donors helped top state officials recoup their personal campaign loans after their elections–and those donors were then rewarded with state contracts.

Until now, the law was working as intended: A study found that while self-lending politicians are generally more responsive to post-election donors’ legislative demands, once the $250,000 limit was created, that responsiveness decreased.

But then came the epic legal troll from Cruz, who engineered the case by purposely violating the $250,000 loan repayment limit in his 2018 Senate campaign. His cartoonishly corrupt goal: striking down the limit and in the process reaping himself a personal $545,000 windfall from past self-loans that his big donors could recoup for him.

Cruz’s case was boosted by amicus briefs from fellow GOP senators (including McConnell) and the Republican National Committee. The New Civil Liberties Alliance and the Institute for Free Speech, which filed their own amicus briefs, are bankrolled by the Leo-led dark money network that helped install five of the six conservative justices currently on the Supreme Court.

And now the Texas senator’s bet has paid off: The Roberts Court last month ruled that access–and favor-seeking donors funneling post-election cash to lawmakers’ personal bank accounts via campaign loans is “the sort of ‘corruption,’ loosely conceived, that this Court has repeatedly explained is not legitimately regulated.”

The Roberts-written opinion then declared that campaign donors’ “influence and access embody a central feature of democracy–that constituents support candidates who share their beliefs and interests, and candidates who are elected can be expected to be responsive to those concerns.”

So to review: In response to the passage of bipartisan campaign finance reforms in the early 2000s, the Roberts Court spent a dozen years dismantling those reforms and then making it legal to spend unlimited sums of money to buy public offices, give gifts to elected officials in exchange for favors, and directly funnel cash to politicians’ personal bank accounts as they write legislation.

At precisely the same time, legislators delivered tax cuts, subsidies, deregulation, bailouts, and other assorted favors to the donors writing the bribe checks–all while Supreme Court justices delivered ever-more extreme rulings to the delight of the dark money network that bought themtheir seats.

This system of legalized corruption is now almost perfected–but Roberts and his colleagues’ crusade almost certainly will not stop there. Of late, the American Right and lower courts are signaling a new attack on laws that merely require disclosure, insisting that transparency is unconstitutional “compelled speech.” If Roberts soon applies that argument to campaign finance, the buying and selling of democracy that he legalized could happen in complete anonymity.

In Five to Four’s recent podcast reviewing the Cruz case, one of the hosts noted that this is Roberts and his fellow extremists on the court screaming their ideology out loud,

And that, he argues, is why the campaign finance cases will define this judicial epoch. They have created the superstructure upon which all the other horrible laws and precedent are built–or, more precisely, bought.

“There’s so much awful that the court is doing right now [but] I really do think that the stuff that’s going to define this era looking back will be their campaign finance–and election-related decisions,” he said.

Just like the early 1900s, we call it the Lochner Era for one of the more egregious cases of the court striking down worker-friendly regulations. I think this is gonna be the Citizens United Era.