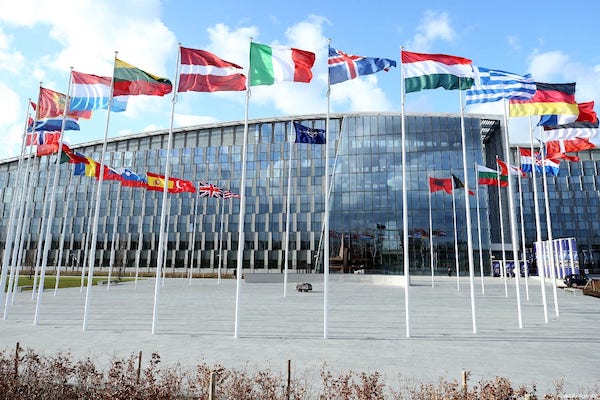 In what NATO Secretary-General Jens Stoltenberg called the “biggest overhaul of our collective deterrence and defense since the Cold War,” the U.S.-led NATO alliance has announced plans to build a massive standing land army in Europe, numbering in the hundreds of thousands.

Stoltenberg said NATO would increase its “high readiness forces” sevenfold, from 40,000 to 300,000, deploying tens of thousands of additional troops, as well as countless tanks and aircraft, directly to Russia’s border.

The move will entail a massive diversion of social resources to NATO’s ongoing war with Russia and planned war with China, draining treasuries throughout Europe and North America and fueling demands for the elimination of social services, the slashing of wages, and the gutting of workers’ pensions.

Stoltenberg said the creation of this massive fighting force was a response to the “new era of strategic competition” with Russia and China.

He called the plan “a fundamental shift in NATO’s deterrence and defense,” embracing not only the war with Russia, but “the challenges that Beijing poses to our security, interests and values.”

As a part of this massive expansion of its fighting force, NATO will increase the numbers of troops stationed in Latvia, Lithuania and Estonia to the “brigade” level, meaning approximately 3,000 to 5,000 troops.

The Financial Times reported, based on an interview with Stoltenberg, that the plan will “include new structures in which Western NATO allies, such as the U.S., UK and France, would pledge their ships, warplanes and a total of more than 300,000 troops to be ready to deploy to specific territories on the alliance’s eastern flank, with graded response times starting from the opening hours of any attack.”

Instead of troops deployed to the Baltics serving as a “tripwire,” the new plan would envision NATO fighting a war against Russia directly on the borders of these countries on NATO’s eastern battlefront.

Stoltenberg boasted that “2022 will be the eighth consecutive year of increases across European Allies and Canada,” adding that NATO’s target of two percent of economic output going to military spending will be “considered a floor, not a ceiling.”

Members of the NATO alliance, meanwhile, are openly using the language of war. In his first public speech as the chief of the general staff, General Sir Patrick Sanders will, according to the Telegraph, declare that the UK army must be ready to “fight and win” against Russia.

Simultaneously, the U.S. and its allies are intensifying the economic embargo against Russia. Over the weekend, participants in the G7 summit announced plans to ban imports of gold from Russia and are finalizing plans to try to put price caps on oil and gas sold by Russia.

On Monday, Russia officially defaulted on its foreign debt payments, after European payments clearinghouses refused to process payments from the country. Russian officials insist that they have the funds available to make the payments, but that it has been effectively cut out from the European financial system and hence forced to carry out an artificial default.

Regardless, this would be the first time Russia has defaulted on its debts since 1918, when the Bolshevik government, in the wake of the 1917 revolution, repudiated the foreign debts of the Tsarist regime.

NATO’s  massive military escalation comes as the official position of the United States and NATO—that they are not at war with Russia—becomes increasingly untenable.

This weekend, the New York Times reported that U.S. forces are secretly operating on the ground in Ukraine, as well as forces from several other NATO countries, despite the denials of Biden and other NATO leaders.

“But even as the Biden administration has declared it will not deploy American troops to Ukraine, some C.I.A. personnel have continued to operate in the country… directing much of the vast amounts of intelligence the United States is sharing with Ukrainian forces,” the Times wrote.

The newspaper reported that dozens of special forces from the UK, Canada, France and Lithuania have been operating inside the country.

The revelation, the report continued,

hints at the scale of the secretive effort to assist Ukraine that is underway and the risks that Washington and its allies are taking.

The Times report is only the latest piece of evidence documenting the extent of U.S. involvement in the war. Earlier this year, NBC and other media outlets reported that the United States was directly involved in Ukrainian targeted killings of Russian generals, as well as the sinking of the Moskva, the flagship of Russia’s Black Sea fleet.

Ukrainian commanders, according to these reports, are provided intelligence extracted from satellites “which they can call up on tablet computers provided by the allies. The tablets run a battlefield mapping app that the Ukrainians use to target and attack Russian troops.”

Despite the massive degree of U.S. involvement in the war, Ukrainian losses are surging, rivaling the number of U.S. combat deaths at the deadliest point of the Vietnam war. On some days, Ukrainian forces have suffered between 500 and 1,000 casualties.

Russia now controls more than 90 percent of the Donbass in East Ukraine and a total of one fifth of the entire territory of Ukraine. But despite the disastrous series of battlefield setbacks, the United States and its NATO allies are massively intensifying their involvement in the war, no matter the cost in Ukrainian lives or the trillions of dollars diverted from vital social programs.

Russian officials are drawing the conclusion that open war between NATO and Russia is all but inevitable. In remarks last week, Russian Foreign Minister Sergey Lavrov said:

Hitler rallied a significant part, if not most, of the European nations under his banner for a war against the Soviet Union… now, the EU together with NATO are forming another—modern—coalition for a standoff and, ultimately, war with the Russian Federation.

The deadly logic of the spiraling conflict raises the prospect that the proxy war in Ukraine will rapidly metastasize across the European continent, triggering the deadliest global military conflict since the Second World War. This reality makes clear the urgent necessity for the working class to intervene in the crisis, aiming to unite the struggles against the surging cost of living and attacks on democratic rights with the struggle against war.