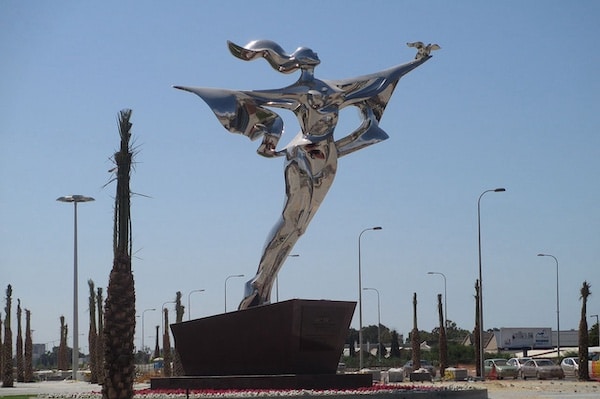 [Peace talks with the Israelis]… that’s the kind of conversation between the sword and the neck.

U.S. media outlets and politicians have nearly all parroted the same praises of the recent “peace agreements” between Israel and the repressive U.S.-backed governments of the United Arab Emirates, Bahrain, Sudan, and Morocco. Rather than acknowledging such agreements as the product of longstanding U.S. support for existing security and economic relations between these governments and Israel, outlets like the New York Times are more interested in promoting Donald Trump as an “international peacemaker,” calling the agreements a “breakthrough” and “landmark accord.”1 Unwritten and unspoken about, such agreements are part of the history of intense U.S. and Zionist repression against all forms of anti-normalization, of which many Palestinian and Arab organizations have faced the brunt internationally.2

For the governments of countries like the United States and Israel, the use of the word peace always means the opposite. The reactionary Arab governments who have signed the recent “peace agreements” have never actually been at war with Israel, with the agreements amounting to a celebration of nothing. What these agreements did accomplish, however, was to publicly entrench normalization between Israel and its regional allies in an unprecedented manner, and strengthen their collective abilities to repress true fighters for peace.

Normalization cannot be reduced to a signature from a few Arab puppet leaders on a piece of paper. It is not merely an abstract set of commitments to “open markets” and “public dialogue.” Normalization is Emirati capitalists purchasing Palestinian homes in Jerusalem, on behalf of fascist Israeli settler organizations.3 Normalization is Gulf monarchies using Israeli spyware to repress their own citizens, alongside billions of dollars’ worth of U.S. attack aircraft and precision-guided munitions to wage a devastating war on Yemen. Normalization is Emirati officials defending Israel’s “right to defend itself” as the Israeli occupation forces terrorize Syrians.

It must be noted that the capitalist elites of the Gulf, Sudan, and Morocco structurally do not represent the interests of the majority of their working-class, disenfranchised, and impoverished peoples. In fact, the 2019–20 Arab Opinion Index, the largest public opinion survey carried out in the Arab world, shows us that these citizens overwhelmingly reject normalization with Israel, with the number one stated reason being that it is a “colonialist occupying power in Palestine.” According to the survey results, the vast majority of the Arab public across the region, including Palestine, objectively understand the Palestinian struggle as a pan-Arab struggle, thus recalling one of the historic principles and successful lessons of the Arab Nationalist Movement, among the largest anticolonial movements in Arab history.1 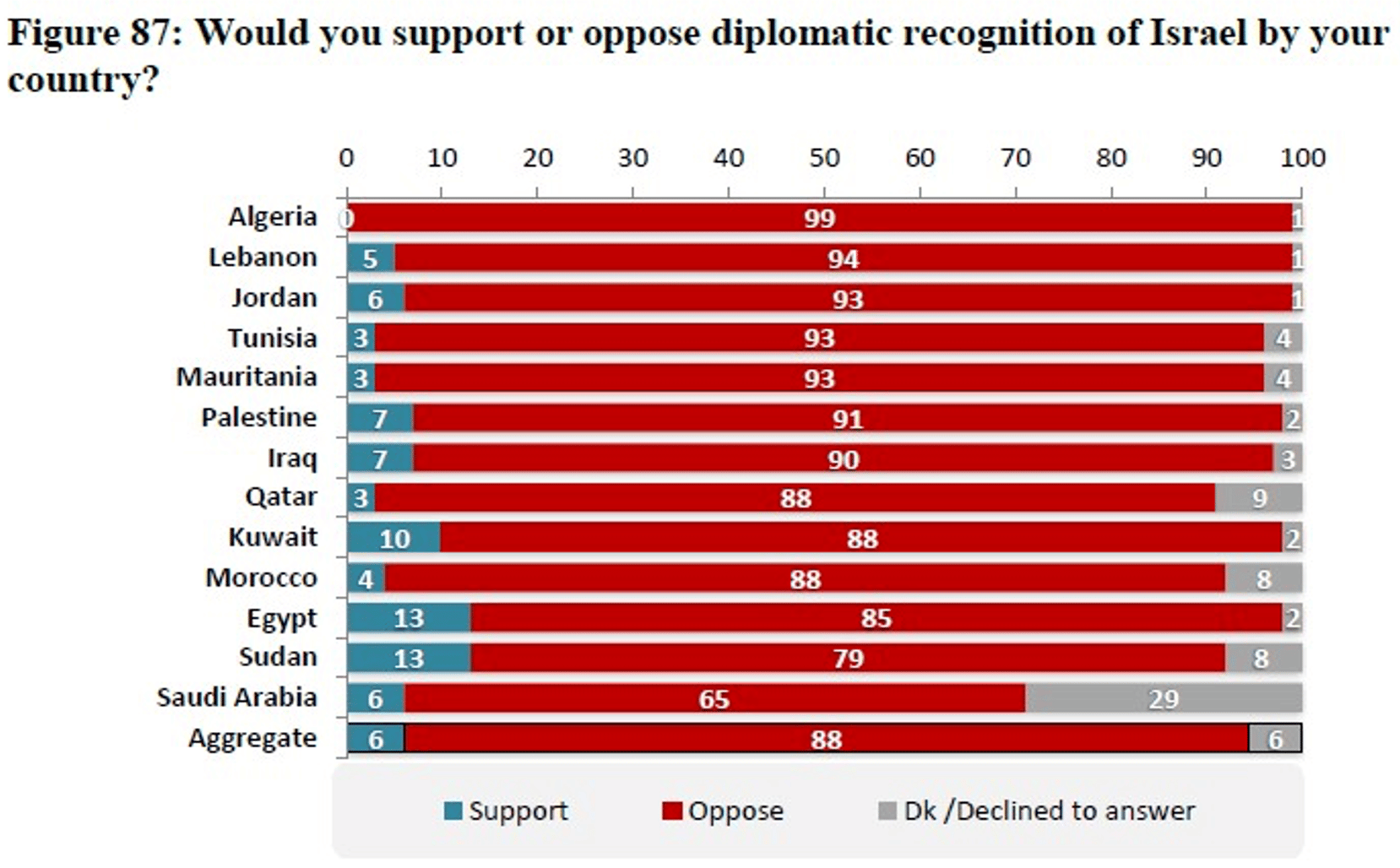 Recognizing the function and role that the Gulf states in particular play in the Arab region is critical to understanding their decades of cooperation with Israel, facilitated largely by the United States through neoliberal financial agreements. Adam Hanieh, a scholar of the political economy of the Arab region, has researched how U.S. support for normalization between Israel and Gulf states was central to the political and economic subordination of the wider Arab region:

The U.S. has pursued a policy of integrating its bases of support in the region within a single, neoliberal economic zone tied to the U.S. through a series of bilateral trade agreements. The region’s markets will be dominated by U.S. imports, while cheap labor, concentrated in economic “free” zones owned by regional and international capital, will manufacture low-cost exports destined for markets in the U.S., the EU, Israel, and the Gulf.

A central component of this vision is the normalization and integration of Israel into the Middle East. The U.S. envisions a Middle East resting upon Israeli capital in the West and Gulf capital in the East, underpinning a low-wage, neoliberal zone that spans the region. What this means is that Israel’s historic destruction of Palestinian national rights must be accepted and blessed by all states in the region.

Ali Kadri, another specialist of the political economy of the Arab region, has succinctly defined neoliberalism as “taking what is public and making it private.” This has meant that private financial institutions (dominated by the West) are given the power to control economic policies, rather than there being any local state regulation or public control. Neoliberal policies have allowed resources to drain out of the Middle East, a type of vampiric force that undermines sovereignty and social welfare for the majority of people. Therefore, U.S. support for Zionist normalization has been deeply connected to the rapid neoliberal restructuring of the Arab region since the 1980s. These relationships are clear to the Arab streets, who experience these conditions and thereby recognize that the Palestinian struggle holds immense strategic weight in the political struggles of the region as a whole, as Israel represents the central pole of imperialist power and political-economic domination over the region.

Historically, it was boycott and resistance that led to the defeat of apartheid in South Africa, not appeasement or capitulation. South African politician Ronnie Kasrils drew a candid historical comparison, stating that “independent African states and the then Organisation for African Unity showed far more backbone, unity and solidarity in the struggle against South African apartheid, than Arab states and the Arab League with respect to the Palestinian cause.” Kasrils spent three decades first as a member of the African National Congress’s armed wing co-founded by Nelson Mandela, and later as its chief of intelligence, as well as a member of the central committee of the South African Communist Party. The South African liberation movement received material support and military training from fellow African countries including Libya, Algeria, Egypt, and Ethiopia. However, Frontline States were the target of destabilizing attacks by the apartheid regime, instigating civil wars and massacring people in consistent raids into neighboring countries. Despite such attacks, the Frontline States persevered and added to an effective unified resistance that ultimately isolated and defeated apartheid.

The United States and Israel engage in their own form of destabilization campaigns, targeting countries like Iran and Syria with vicious sanctions, and placing groups who reject normalization on “terrorist” lists. Most recently, Israeli defense minister Benny Gantz officially declared six prominent Palestinian human rights groups to be “terrorist organizations” last year: Al-Haq, Addameer, Defense for Children International Palestine, the Union of Palestinian Women Committees, the Union of Agricultural Work Committees, and the Bisan Center for Research and Development. To Israel, any sector of organized society that is committed to promoting the well-being and rights of Palestinians, including medical, legal, environmental, and even cultural nonprofits, are guilty of so-called terrorism. Such classifications have a tremendous impact on outside funding, ability to travel, and have led to random arrests and raids of civil institutions by Israel. On the Palestinian side, the Oslo normalization agreement between the Palestinian Liberation Organization and Israel in 1993 produced the Palestinian Authority as an institution of collaboration with Israel that represses Palestinian resistance even further, while Israel has quadrupled the number of illegal Israeli settlers in the West Bank and mercilessly assaulted the besieged Gaza Strip on all fronts.

We should be clear and objective with our people: there are two defined camps in the region, the camp that is of the people and for resistance, and there is the camp of elites and kings who are for collaboration and safeguarding their wealth in exchange for our national rights. Our task as Arabs living in the United States is to join with an organization that has always openly rejected normalization and that centers Palestinian and Arab leadership over our own struggle, such as the U.S. Palestinian Community Network, Arab Resource and Organizing Center, and Palestinian Youth Movement, to name a few. The U.S. Palestinian Community Network is led by our working-class community members, across generations, from Nakba survivors to young students in high school and college. It is important to learn from the experience of our elders who were participants in the Arab Nationalist Movement and the height of Palestinian organizing in the United States during the 1970s and ’80s, as they have been doing this work for the longest amount of time. One of our most important projects currently has been the creation of an original political education curriculum, which we have used to give in-depth workshops on Palestinian history to our own community members as well as teacher unions, student groups, and partner organizations. Many of us in the younger generations of Palestinian and Arabs, especially in the United States, have not been exposed or have not had the opportunity to learn our history in an accessible and discussion-oriented setting, particularly from an anti-imperialist perspective. While Arab states may have forgotten the lessons of our history, we are making sure that our people in the diaspora never do.