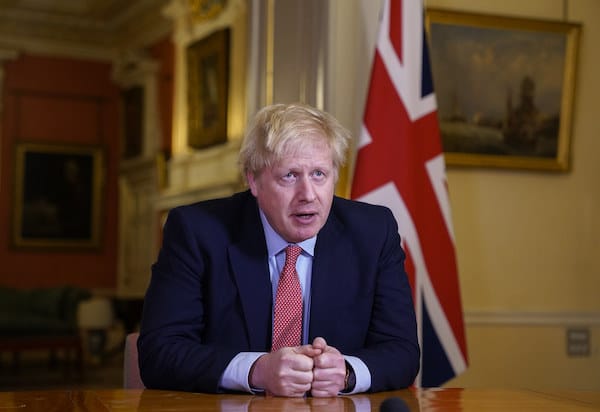 Boris Johnson resigning would only be interesting in an alternate universe where there was some remote chance that he won’t be replaced by another depraved sociopath.

Remember when rich people were so worried about Jeremy Corbyn raising their taxes that they spent months pretending to believe he was a closet Nazi? They really committed to the bit, too. You weren’t even allowed to call it a bit because they’d start saying you’re a Nazi for defending a Nazi. It was wild.

1. Use narrative manipulation to divide the population into a roughly 50/50 ideological split.

2. Ensure you control both of those factions.

3. Convince everyone that the only reason nothing changes is because their half of the population doesn’t win enough elections.

Everyone’s pulling on a rope that doesn’t lead anywhere and doesn’t do anything, convinced by powerful manipulators that they’re engaged in a life-or-death tug o’ war match of existential importance. Meanwhile the powerful just do as they like, completely indifferent to that spectacle and its back-and-forth exchanges.

A group is artificially split into two sides and told to pull a rope in opposite directions while someone else stands back and shoots them all with a BB gun. When they complain about the welts, they’re told it’s happening because their side isn’t pulling hard enough. But really they’d be getting shot no matter what they did.

This doesn’t mean give up, it just means give up on the fake tug o’ war game. If you’re playing tug o’ war while someone rummages through your handbag looking for cash, the first step to stopping them is putting down the rope and going after them. It’s like if everyone was pushing on a fake fire escape in a burning building: the first step to getting them out of there is showing them that the door is just painted on the wall and doesn’t lead anywhere. That’s not telling them to give up hope, it’s just telling them to give up on an ineffective strategy.

Every claim the western “rules-based international order” makes about itself and its values has been discredited by the persecution of Julian Assange.

Current U.S. and NATO proxy warfare in Ukraine isn’t sufficient to defeat Russia, or even to stop Putin from continuing to capture territory in eastern Ukraine. All it’s sufficient for is making the war costly for Moscow while Ukrainians keep dying. That’s because this is exactly what the empire wants.

“I care about Ukrainians, so I support a negotiated settlement” is a morally coherent position.

“I care about Ukrainians, so I support direct hot war with Russia” is also morally coherent, if insane.

“I care about Ukrainians, so let’s keep doing what we’ve been doing” is not morally coherent at all.

I of course point this out not to advocate a third world war, but to show that the western empire does not care about Ukrainian lives and isn’t doing what it claims to be doing with its proxy warfare in that country. If the empire cared even the slightest whit about Ukrainian lives it would be drastically changing its approach, one way or the other. The fact that it’s just maintaining the status quo of continuous death is their confession that they only care about grand chessboard maneuverings for global control, not the actual people who are fighting and dying.

That’s why so many of their tweets get so little traction but they’ll still have one or two blue-ticks chuckling at their esoteric witticisms and obscure references in the replies; it’s because they’re tweeting for each other, not for normal people. And that’s how the entire profession works.

The Pulitzers are just a bunch of propagandists giving each other trophies and assuring each other they’re doing brave and important work. Meanwhile the public just gets more and more disgusted with them, but they don’t care because their validation doesn’t come from the public. They complain that they don’t get enough respect when in reality they get far too much. They’re absolutely the worst people on earth. A bunch of worthless, simpering sycophants, the whole lot of them.