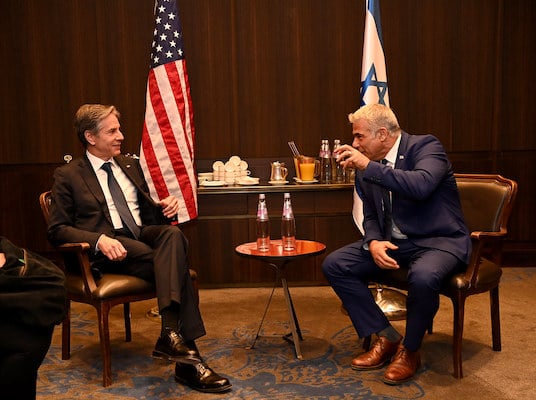 Secretary of State Antony Blinken and national security adviser Jake Sullivan embark on their next excellent adventure later this week with President Joe Biden–this time to the Middle East, with Israel the first stop.

There is not the slightest pretense that the visitors will reproach their Israeli hosts on Israel’s Apartheid regime. Nor does anyone expect President Biden to tell the Israelis they can no longer get away with murdering U.S. citizens. Journalist Shireen Abu Akleh, shot by an Israeli soldier on May 11, comes to mind; also 23-year-old volunteer Rachel Corrie (crushed under an Israeli bulldozer on March 16, 2003), and the 34 seamen killed on the USS Liberty on June 8, 1967.

That the Israelis are given carte blanche–that they think they can get away with murder–should be no secret, whoever happens to be president in Washington. Just before President Barack Obama picked Biden to be his running mate, Biden crowed,

I am a Zionist. You don’t have to be a Jew to be a Zionist.

If the song sheet says sing about Israel’s right to defend itself, Biden sings. Recall that during the 2020 Presidential primaries, as author Peter Beinart argued, Biden had an “alarming” non-progressive record on Israel. “Biden basically just sees Israel as a domestic political issue,” Beinart told The New Yorker. Of people like Blinken and Sullivan, Beinart added,

I don’t know whether they wrestle with this or whether they feel guilty. I do think that, one day, they will be judged harshly for helping to keep Palestinians oppressed.

No ‘Sense of Guilt’ Evident

Far from it. All too fresh in my mind is the infuriating experience of experts like Scott Ritter who could prove that virtually all of Iraq’s “weapons of mass destruction” (WMD) had been destroyed. Neither Ritter nor other non-biased analysts with many years of expertise could get through the door to testify before the Senate Foreign Affairs Committee chaired by Joe Biden. The door was barred by Blinken who in those days was Biden’s chief foreign policy aide and played a key role in greasing the skids for a war of aggression on Iraq.

But what has this got to do with Israel? A lot. In early 2003 I coined the acronym “OIL,” in an attempt to explain U.S. motives behind the attack on Iraq (and why no one was ever able to find any WMD). (Happily, Jon Stewart spent some time displaying “OIL”, while accusing me of “violating the rules for acronyms”!). I used OIL again in 2005 in testimony before Congress.) O for Oil; I for Israel; and L for Logistics (meaning the military bases the U.S. hoped to establish in Iraq).

I caught hell, from the usual suspects, for attributing part of the blame to Israel but, in retrospect, the Israeli factor (the shortsighted idea of making the Middle East safer for Israel) seems to have been the more important of the three.

There is ample evidence that Antony Blinken is at least as proud a Zionist, as his boss. In fact, when the president nominated him to head the State Department, Israeli officials rejoiced, The Times of Israel noting:

Tony Blinken is the stepson of a Holocaust survivor whose stories shaped his worldview and subsequently his policy decisions, including in the Middle East.

Nor has Jacob Jeremiah Sullivan shown any lack of devotion to Israel. Inter alia, between the two of them they have thwarted fulfillment of the promise Biden made during the campaign to restore the nuclear deal with Iran (the Joint Comprehensive Plan of Action) strongly opposed by Israel.

It gets worse. Sullivan is still putting out drivel for journalists to swallow.

Sullivan’s parting shot before leaving for Israel came during a press conference Monday, in which he cited “information” that Iran was providing hundreds of drones to Russia. Sullivan was aiming to hit three birds with the same canard: Iran, Russia, and Houthis in Yemen.

I talked about the severe costs that Russia has had to endure on the battlefield … this is coming at a cost to the sustainment of its own weapons.

Our information further indicates that Iran is preparing to train Russian forces to use the UAVs [drones] with initial training sessions slated to begin as soon as early July.

It’s unclear whether Iran has delivered any of these UAVs to Russia already.  But this is just one example of how Russia is looking to countries like Iran for capabilities that are also being used, I might add, or have been used before we got the ceasefire in place in Yemen, to attack Saudi Arabia.

So, from our perspective, we will continue to do our part to help sustain the effective defense of Ukraine and to help the Ukrainians show that the Russian effort to try to wipe Ukraine off the map cannot succeed.

Thankfully, Moon of Alabama has already laid that canard to rest.