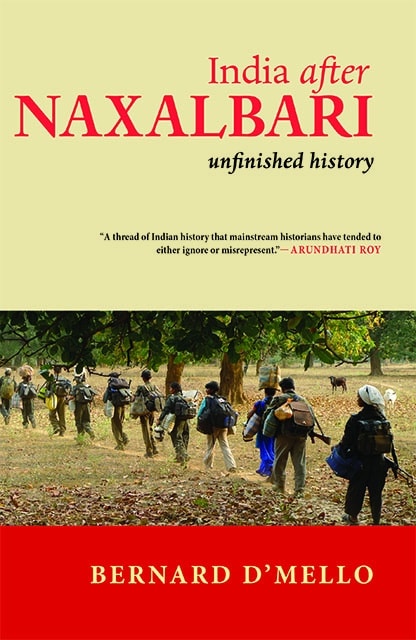 Bernard D’Mello’s India After Naxalbari: Unfinished History is simultaneously a history of India’s political, economic and social development since the British Raj to the present; a historical retracing of the different attempts to build a revolutionary movement in India; and a political intervention into contemporary debates within the Indian left. Summarizing his methodology, D’Mello writes: “To understand India, it is essential to get to the roots of the poverty, the misery, the degradation, and the injustice that the majority of its people suffer” (13). D’Mello’s book is thus a searing critique of India’s political–economic history and present, and an exhortation to political action.

Rather than proceeding from political economy to revolutionary struggle, D’Mello begins with two chapters recounting the histories of the communist movement, the civil liberties and democratic rights movements, the ecological movement, the Dalit (“untouchables”) movement, and the women’s and workers’ movements, while simultaneously relocating India within the global 1968 moment. D’Mello acknowledges that this is a voluntarist perspective, and notes that it must be complemented with a “determinist” perspective that has “to be intelligently synthesized to gain a fuller under- standing of ‘the present as history’” (14).

D’Mello thus shifts in Chapter 3 to the “determinist” perspective by ex- amining the “principal characteristics of India’s underdeveloped capitalism and the process of dependent and unequal development, steered, during the last six to seven decades, by an Indian big business–state–multinational capitalist ruling bloc” (14–15). Despite his affinities for the Maoist movement, D’Mello does not utilize its analysis and nomenclature, and his analysis is an ideological competitor to theirs. Using the framework that he outlined in What is Maoism and Other Essays, and inherited from Monthly Review, D’Mello deploys Immanuel Wallerstein’s world systems approach to argue that the British Raj’s integration of India as a periphery helped transition India from a “declining petty-commodity, ‘tributary’ social formation in the first half of the 18th century to ‘underdeveloped capitalism’ by the mid-nineteenth century” (110). Two major developments took place in the economic structure. The first is the settling of landowners in urban centers, where their children were educated and employed in petit bourgeois careers. These urbanized landowners thus hired intermediaries to represent their financial interests in the villages, resulting in a formal distinction between their political and economic power, although in practice many landlords continued to exercise judicial and police powers and presided over the village councils (panchayat) (110). The second was that the Indian comprador bourgeoisie accumulated sufficient wealth as trading agents for the East India Company, and subsequently as indigenous banking intermediaries of British joint-stock banks. This accumulation enabled them to take control of industrial assets and become a form of Indian big business, with an ambivalent relationship to the Multinational Corporations (MNCs) (111–112). In chapter 4, D’Mello returns to the Maoist movement during its second phase, especially its emphasis on building mass organizations and movements, and the parallel building of a guerrilla army (1978–2003).

Chapter 5 returns to the determinist account by examining the significant economic changes introduced in 1989, in particular “the state’s handover of scarce natural-resource and other public assets cheap to Indian big business and MNCs, assets that are then commoditized, and become the source of capital gain” (16). D’Mello compellingly argues that this allowed India to become, using Ray Mauro Marini’s concept, a “sub-imperialist” country, and set the stage for the conflict between the Adivasi (tribals) and Maoist move- ments, and Indian big businesses and MNCs. D’Mello, in chapter 6, contends that capitalism and democracy, the latter understood as the people’s will, are incompatible; he criticizes India’s liberal democracy as a competition between two or three parties for oligopolistic power. Furthermore, this oligopoly relies on political violence to repress people’s movements. D’Mello develops this latter point in chapter 7 when examining the third phase (2004–2013) of the Naxalite movement, characterized by the existence of a significant guerrilla army, and the Indian government’s attempt to repress it using “Operation Green Hunt.”

D’Mello steps back in chapter 8 to analyze the state’s practices towards personal freedoms, notably the freedom of religion, by examining three pogroms unleashed against religious minorities, in Delhi (1984), Bombay (1993), and Gujarat (2003). D’Mello concludes that both major parties, Congress and BJP, engaged in prejudicial behavior and attacked minority religious communities. This culminates, in chapter 9, with the rise of the BJP under Narendra Modi in 2014. D’Mello describes the Modi government as a “semi-fascist,” “authoritarian-democratic” regime reliant on sub-imperialism. D’Mello concludes in chapter 10 by exploring what new kind of state is needed and what would be a “communitarian basis of socialism,” thus offering a resolution to the peasant question and providing an “interim program to first win the political battle against Hindutva-nationalism and semi-fascism” (19). Given the importance of caste in Indian political economy, D’Mello also includes an appendix on the relationship between caste and class.

While D’Mello’s political–economic analysis is preferable to that of- fered by Maoist ideologues, his analysis of the state remains too inscribed within Leninist conceptions. D’Mello’s text is replete with comments about “the” state or “the Indian state.” Rather, than conceptualize the state as a condensation of the relations between classes, ethnic groups, language

groups, etc., riven by contradictions and tensions, D’Mello’s analysis of the state remains monolithic; the state operates above or in opposition to the people. His belief that Indian democracy “is rotten; the electoral process has already been successfully hijacked with the power of money and wealth” seems too unequivocal and overstated. D’Mello effectively excludes any possibility of having any relationship with the Indian state besides one based on pure alterity. This is paralleled by his lack of attention to the Left Front. Indeed, considering that the Hindutva movement was able, over a period of decades, to build a hegemonic bloc within Indian society, including an electoral arm, why couldn’t Indian communists do the same? Indeed, the lack of success by either parliamentary or non-parliamentary communists in achieving their goals suggests that there is a deeper crisis of Marxism in India than D’Mello wishes to admit to.

D’Mello’s India After Naxalbari offers a vivid and wide-ranging examination of India’s history and political landscape and is a valuable contribution to contemporary debates about India’s political–economic situation, and left strategy and tactics. D’Mello’s most significant contribution is his forceful argument for an alternative to the account of the Indian Maoist movement, while remaining sympathetic to their goals and intentions.