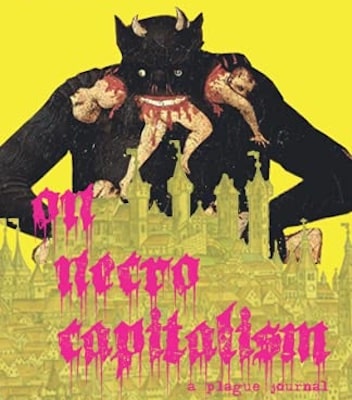 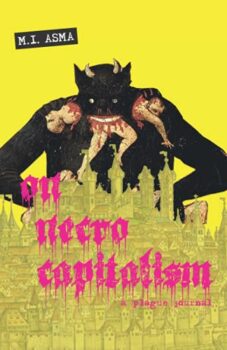 It is a testament to the power of On Necrocapitalism: A Plague Journal that a set of interventions written across the first year of the COVID-19 pandemic should remain so potent and resonant as we approach its fourth year. Writing about events as they happen is fraught with the risk of quickly sounding dated, that the authors will focus on aspects that didn’t have much cultural longevity or that the conclusions and predictions will soon ring hollow. None of these weaknesses haunt the incisive and at times magnificent On Necrocapitalism.

The reason, of course, is spelled out by the authors themselves (M.I. Asma is a pseudonym for six authors who contributed individual chapters building upon previous entries, between April 2020 and May 2021, and then collaborated on a prologue and epilogue). In the third chapter, the authors explicitly note that it is easy to get caught up in ‘fetishizing the surface froth’ of capitalism’s destructive wake, and thus place too great emphasis on ‘tailing the latest cultural mutation of capital’ (38). Instead, they insist, the pandemic needs to be understood as just another manifestation of a necrotic capitalism: a system whose obscene violence and misery in the 2020s may reflect a kind of disastrous senility, but–from the standpoint of the oppressed masses–is fundamentally not different from any other murderous chapter in its history.

Anchoring their reflections on the pandemic and its cascading impacts in Marxist tradition and analysis, the authors illustrate that the obscenities we have witnessed since early 2020 have, in fact, reflected the core logic of capitalism. For instance, the disproportionate COVID death toll in long-term care homes was a new manifestation of a longstanding disregard for the elderly and infirmed in capitalist society; after a harrowing description of the normal conditions in such facilities, the authors note that one of the largest for-profit operators in the sector is indirectly owned by–thus its profits flow to–the pensions of Canadian police and military (75). These ordinary cruelties are emphasized by the authors in a section that powerfully illustrates that our dystopia is, in fact, modern capitalist society, of which the pandemic was only one aspect.

This dystopia is reflected not just in the increasingly dire material conditions of life for the working classes but also in the diseased and self-defeating liberal ideology and exceptionalism that permeates this society in crisis. The authors correctly note that the United States demonstrated, even in spite of all the resources it plunders from the global south, ‘that it is incapable of protecting its citizens, that it will protect its economy first and foremost, and that its medical system is one of the worst infrastructures in the world, [yet] even still, dedicated U.S. citizens believe […] that they live in the best country in the world’ (98). The self-delusion calls to mind the famous photo of a bread line in the Midwest whose occupants are standing beneath a propaganda mural depicting Americans enjoying ‘the world’s greatest standard of living.’

Indeed, at the heart of this liberal dystopia is the prioritization of individual rights over social rights, a problem which manifests with grave consequences in the pandemic and which the authors recognized early in its first months. Even in the summer of 2020, while viral transmission was being driven largely by workplaces that maintained their operations without strict enough public health measures (e.g. the deadliest job in the first year of the pandemic was reportedly to be a line cook), the prevailing discourse was to blame individuals for going to parties or spending holidays with family. The authors bring attention to this, recognizing its significance and, indeed, by 2022 most public health measures had been removed, data collection and distribution was compromised and taking protections against COVID infection had become entirely privatized to the individual. You are individually free to not participate in a society widely transmitting COVID, just as you are individually free to not participate in the capitalist market itself; in both cases, the ‘choice’ is an illusion since the alternative is disease, poverty and/or death.

In this sense, On Necrocapitalism delivers a powerful message; liberal capitalism itself is the disease we must eradicate; COVID-19 is simply one of its morbid symptoms. This is given added weight in the essays on the 2020 uprising in response to the murder of George Floyd, wherein the authors note that the anger and energy of that uprising was quickly interrupted by hand-wringing liberals worried about ‘cancel culture,’ or the possibility that oppressors might be held responsible for their actions. By late 2020, criticizing ‘cancel culture’ was a cottage industry, producing an endless litany of thinkpieces extolling free speech as the ‘lifeblood’ of liberal society. The authors astutely note that the lifeblood of liberal society has always been literal blood–that of dispossessed Indigenous people, African slaves, colonized people, exploited migrant laborers–and that free speech matters little to those who do not have the material power to make action flow from it (145).

No amount of free speech by the working poor–with limited resources to amplify their voices–could combat that of the wealthy and privileged who wanted to ‘get back to normal’ (i.e. get their workers back to work), knowing that they would still be able to use their resources to protect themselves from transmission if they wanted to. This is highlighted by the authors who note that ‘education bureaus […] that were bent on pressuring schools to re-open placed families between the Scylla and Charybdis of risking illness and death by COVID-19 or shouldering additional economic hardship’ (180). This downloading of risk onto the most vulnerable people is masterfully examined in one of the book’s most powerful chapters, which puts the spotlight on migrant workers’ experience of the pandemic, illustrating the harrowing extent to which the lives of nannies, caregivers, farm workers and other migrant workers were ‘considered disposable’ and routinely exposed to COVID for the sake of the comforts of bourgeois families (199).

One of the most poignant aspects of On Necrocapitalism is the way the authors link this dystopian capitalism to a growing, gnawing nihilism among its liberal subjects. This was on particular display in 2020; ruling class incompetence and self-interest allowed a deadly virus to cull the working classes even while police violence worked to quell rebellion, and when rebellion could not be defeated by batons, it was channeled into the dead-end of electoral politics. The George Floyd uprising was to have its energy siphoned by the vampiric Democratic Party apparatus promising that the way to end racism, violent police and the pandemic nightmare was to ‘vote blue.’ As the authors put it, ‘the ideologues of this diversion have hammered it into our heads that there is no alternative, no future, and no history beyond capitalist foreclosure’ (223).

The nihilism generated by these cascading crises and the overwhelming repressive and co-optive powers of the ruling class is hard to resist, even for those who understand it. While the authors will ultimately critique it, their description of the temptation of left nihilism is compelling and resonant:

We have witnessed multiple failures and have been socialized to forget or dismiss any success. We lived through the trauma of the collapse of the great revolutionary projects. We were fed false hopes of movementism1 and were incapable of recognizing that these fragmented projects were doomed from the outset. We witness a world crawling towards the edge of destruction, maniacally pursuing mechanics of species suicide. We understand that everything about capitalism is a lie, we know that it cannot save itself from itself because of its logic, but our imagination is such that the possibility of rupturing from this necrotic sequence is unthinkable. Within the reality demarcated and described by the capitalist imaginary, another world is impossible (262).

These are hard truths to accept and even harder truths to build a revolutionary movement upon. But, having validated the emotional experience many on the left today face, the authors carefully and skillfully respond to this position by noting that for the most vulnerable–and this is a rapidly expanding category–the option of giving up is no option at all. Those people facing the full, visceral wrath of necrocapitalism do not have the luxury of pontificating on the hopelessness of our plight; for them, for us all, in the face of the barbarism and death that capitalism offers us, we must forego nihilism and instead express our collective outrage (268).

The closing chapters return more explicitly to the pandemic itself and note, in particular, its increasingly colonial contours, especially in the rush to get vaccines to people in rich countries (many so blinkered by right wing ideology that they refused them) while upholding patent rights preventing poor countries from producing cheap vaccines. Indeed, as the authors note, pharma lobby groups worried that to allow the wide sharing of life-saving COVID vaccines might create a precedent to share other life-saving medicines. The horror!

Horror is an appropriate word to end on. On Necrocapitalism is a horror story, a bloody dystopia set in precisely the world we live in. Written with verve, passion and a caustic sense of humor, it stares hard into the abyss that is liberal capitalism and begs us to do something, anything, to push in the opposite direction. The early days of the pandemic opened up new space for a collective logic, as people confronted the need for shared solutions to a complex problem. But, as the authors remind us, the possibilities of that moment were closed off by police violence, electoral pageantry, a decomposed movementist left and by the nihilistic logic of capitalism itself, assuring us that no better world is possible. On the contrary, a better world is necessary for our survival as a species and recomposing the left will be a crucial piece of that project.

In closing, I wish to acknowledge that one of the authors passed away in 2021, shortly after the book was published. My condolences to his family and friends and may they live in a better world than the one he left behind.

Tyler Shipley is professor of culture, society and commerce at Humber College in Toronto, Canada and is the author of Canada in the World: Settler Capitalism and the Colonial Imagination (2020) and Ottawa and Empire: Canada and the Military Coup in Honduras (2017).