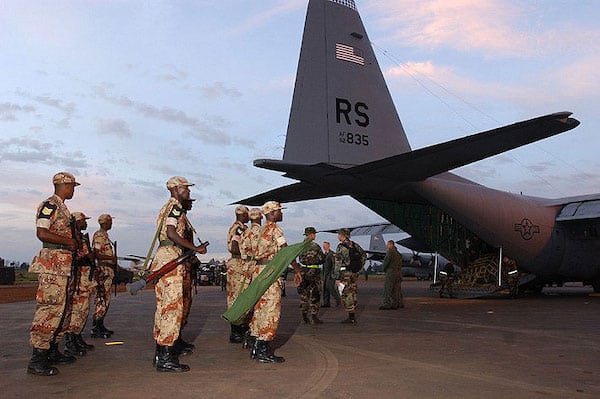 Djibo Sobukwe participated in a Canadian Foreign Policy Institute panel, “NATO and Global Empire ” on June 30, 2022. These are his remarks on NATO and Africa.

I want to thank the organizers for this timely webinar, and for inviting me to make a contribution.

It is timely not only because NATO is concluding its meeting in Madrid as we speak, but also AFRICOM as one of the many arms of NATO  is conducting its yearly military exercises called “African Lion” on the African continent at this time.

Many people on this webinar probably know the background of NATO so I won’t repeat the history.

Since I wrote my article in Black Agenda Report back in February entitled, NATO and AFRICA: A relationship of colonial violence and structural white supremacy, two more European countries have applied for NATO membership, Sweden and Finland and as I understand they will be accepted. This will increase their membership from the founding twelve in 1949 to now 32.

Today, NATO has become a huge global axle in the wheel of the military industrial complex which includes more than 800 U.S. military bases around the world and bases or relationships with almost all African countries, all controlled by the U.S. empire for the purpose of full spectrum dominance , driven by the ferocious appetites of corporate capital.

The late Dr. Walter Rodney accurately described the early foundation of colonial Africa’s relationship with NATO which continues today in his classic book published in 1972 How Europe Underdeveloped Africa.  He said,….”Needless to say, in the 1950’s when most Africans were still colonial subjects, they had absolutely no control over the utilization of their soil for militaristic ends. Virtually the whole of North Africa was turned into a sphere of operations for NATO, with bases aimed at the Soviet Union. There could have easily developed a nuclear war without African peoples having any knowledge of the matter. The colonial powers actually held military conferences in African cities like Dakar and Nairobi in the early 1950’s, inviting the whites of South Africa and Rhodesia and the government of the USA. Time and time again, the evidence points to this cynical use of Africa to buttress capitalism economically and militarily, and therefore in effect forcing Africa to contribute to its own exploitation.”

I want to highlight that last sentence “forcing Africa to contribute to its own militarization.”

It has done this in several ways; most importantly by ushering in Neo-colonial governments after nominal independence that would do the bidding of the former colonizers. Many of these colonizing countries have been part of the NATO membership since its founding, and already had some military installations in these countries.  The re-colonization by way of neo-colonialism was largely successful in spite of the fierce resistance by anti-colonial liberation movements and leaders.

This class struggle also manifested itself in the Organization of African Unity (OAU) in 1963 where there were two contending groups of countries, one group that wanted a continued dependent relationship with the colonizing countries on one hand, and those that did not on the other.

Imperialism has always used its strategy of divide and rule. To enable the acceptance of the idea of a ‘benevolent’ NATO, the colonial powers knew that they had to convince and recruit a neo-colonial class of indigenous Africans who would do their bidding. This divide played itself out in the national liberation movements between those who were friendly to imperialist forces and those who wanted a real break from colonialism. Kwame Nkrumah explains in Neo-colonialism The Last Stage of Imperialism, the wide array of methods employed by neocolonialism, ranging from economics, politics, religious, ideological and cultural spheres. To do this, NATO works hand in hand with other mechanisms of imperialism like the CIA 1 which was instrumental in the coup against the Nkrumah government and the murder of Patrice Lumumba .

Countries that offered organized resistance to colonialism and neo-colonialism included for example the Portuguese colonies. (Portugal was also one of the 12 founding members of NATO). The great freedom fighter of Africa, Amilcar Cabral, called Portugal “a rotten appendage of imperialism” he said, “Portugal is the most underdeveloped country in Western Europe. Portugal would never be able to launch three colonial wars in Africa without the help of NATO, the weapons of NATO, the planes of NATO the bombs- it would be impossible for them.”2

Cabral goes on to explain that the only reason Portugal was able to hold on to its colonies in Africa is because it had been a semi-colony of Britain since 1775 and Britain defended Portugal’s interest during the partition of Africa. Furthermore NATO, a creation of the U.S., uses Portugal and its colonies as part of the larger objective of domination of Africa and the world.3 Portugal conducted a vicious war against its colonies in Guinea Bissau and Cape Verde, Angola and Mozambique much like the U.S. did in Vietnam. In both cases, colonizing powers used the most modern weapons including napalm and cluster bombing campaigns killing thousands, against guerilla armies that refused to bow down. The Portuguese dictator Marcelo Caetano was forced to give up economic interests in Angola to some of the NATO powers in exchange for the NATO armaments and supplies used.4 Yet, Portugal still lost the war against the heroic anti-colonial forces.

The U.S./NATO role in the destruction of Libya in 2011 is important to highlight because it offers some important lessons. First, U.S. imperialism and its western NATO lackies do not accept any country that decides to be an independent force outside of its sphere of influence. Secondly, it also demonstrates how NATO can work hand in hand with other U.S./western dominated world structures like the UN. In 2011 the UN (resolution 1973) gave political authorization for a “no fly zone” and blockade of Libya to purportedly to “protect” the citizens which ultimately resulted in the destruction of Africa’s most prosperous country with the highest Human Development Index. U.S. led NATO forces launched a bombing campaign that killed tens of thousands of civilians and tens of billions of property and infrastructure damage. This shows how although U.S.-led NATO sometimes uses the UN for political cover, it has no problem illegally overstepping its UN mandate to commit its crimes against humanity and achieve its regime change goals.

Indirect and direct cooperation between NATO, the UN the African Union (AU), and the Arab League (which includes the GCC countries ) shows the expansive and deeply woven web of the U.S. and NATO reach.

The book The Illegal War on Libya edited by Cynthia McKinney, includes the chapter titled “NATO’s Libya War, A Nuremberg Level Crime” in which Stephen Ledman writes, “The U.S.-led NATO war on Libya will be remembered as one of history’s greatest crimes, violating the letter and spirit of international law.”

In a just world the U.S., as NATO leader, and the Obama administration’s destruction of Libya in 2011 and the ongoing humanitarian crisis would be prosecuted as a war crime.

The Democratic Republic of Congo has the highest death rate of all, with some 6 million people killed when Uganda and Rwanda, U.S. proxies, invaded that country in 1996 all to insure the uninterrupted plunder of Africa’s strategic raw materials such as cobalt, tantalum, chromium, coltan, uranium etc. These minerals are strategically important not only for cell phones but also for the technologies that drive the military industrial complex.

Those mentioned here are but a small sampling of NATO/AFRICOM’s bloody works in Africa’s past.

AFRICOM is actually a direct product of NATO via the EUCOM (U.S. European command) because EUCOM is a central part of NATO and EUCOM originally also took responsibility for 42 African states. In 2003 NATO started expanding; four years later in 2007 the EUCOM commander James L. Jones who was also commander of operational forces of NATO proposed the creation of AFRICOM.

AFRICOM continues to operate under guise the of “training” and “humanitarian” peacekeeping assistance.

Jihadist terrorist violence on the continent has increased since the founding of AFRICOM and NATO’s destruction of Libya resulting in civilian casualties and instability which the west has used as pretext and  justification for the continued need for AFRICOM. As the Black Alliance for Peace’s AFRICOM watch bulletin reported , since the founding of AFRICOM there has also been an increase in coups by AFRICOM trained soldiers.

Consistent with what Nkrumah, Rodney and others warned of in the 1960’s and 1970’s  NATO continues today in the form of AFRICOM facilitating wars, instability, and the corporate pillage of Africa.

This hypocrisy also explains why 17 African nations abstained from the March 2, 2022 United Nations resolution condemning Russia, and one, Eritrea, even voted no. Their experiences with NATO and AFRICOM ensure skepticism of self-proclaimed noble motives.

The U.S./NATO death toll inflicted on the African continent makes any claim of concern for human rights hypocritical.

The Black Alliance for Peace calls for the dismantling of NATO, AFRICOM and all imperialist structures. Africa and the rest of the world cannot be free until all peoples have a right of sovereignty, and the right to live free of domination.

Every year in October The Black Alliance for Peace organizes the International Month of Action Against AFRICOM which aims to raise the public’s awareness about the U.S. military’s existence in Africa, and how the presence of U.S. forces exacerbates violence and instability throughout the continent. The Black Alliance for Peace also stands against the growing influence and power of SOUTHCOM, and the ever-increasing militarization of the Americas.

No compromise no retreat.

Djibo Sobukwe is on the Research and Political Education Team of the Black Alliance for Peace. He is also a former Central Committee member of the All African People’s Revolutionary Party who worked with Kwame Ture on the political Education Committee.