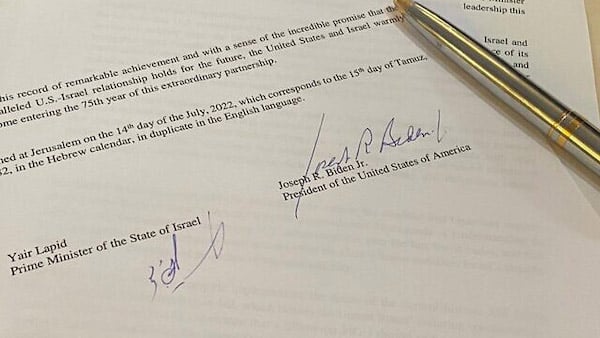 The Jerusalem Declaration signed by Prime Minister Yair Lapid and US President Joe Biden at the Waldorf Astoria Hotel in Jerusalem, July 14, 2022. (Photo: the Times of Israel)

US president Joe Biden will be visiting Saudi Arabia on Friday, July 15 on the last leg of his four-day visit to West Asia. Human rights activists and organizations have especially been critical of the visit for further legitimizing and advancing the Israeli agenda in the region.

During the extended summit of the Gulf Cooperation Council (GCC+3) on Friday, Biden is expected to ask member countries, including Saudi Arabia, to “normalize” relations with Israel and develop a common front against Iran.

Saudi Arabia has thus far resisted openly embracing the U.S.-sponsored Abraham Accords, first pushed by Donald Trump. Despite pursuing clandestine relations with Israel, Saudi Arabia has claimed that it still adheres to 2002 Arab Peace initiative which makes any relationship with Israel conditional on the creation of an independent Palestinian state.

It is difficult for the Biden administration to persuade Saudi Arabia to abandon this public stance and follow the example of the UAE, Bahrain, Sudan and Morocco. Nevertheless, Biden’s visit is expected to start a gradual long-term process towards open, friendly ties between Saudi Arabia and Israel.

The fact that Biden will become the first U.S. president to fly directly to Saudi Arabia from Israel is cited as a small but significant step in this direction. The Saudis are also soon expected to open the nation’s airspace to Israeli airlines companies.

“You do not need to be a Jew to be Zionist”

During his first public appearance after arriving to Israel on July 13, U.S. president Joe Biden claimed he does not need to be a Jew to be a “Zionist”. In return, Israeli caretaker prime minister Yair Lapid declared Biden to be a “great Zionist.”

Biden’s embrace of an ideology used to justify the decades-long occupation of Palestine and one that is considered responsible for creating an apartheid system comes from a long record of being a close friend of Israel. A central question put forward by observers regarding Biden’s visit to the region is its significance for the people of the U.S. and the country’s foreign policy.

The stated goals of Biden’s visit is a closer relationship between Israel and Saudi Arabia, energy security, and a cohesive regional front against Iran, all with the intention of ensuring “better security” and “greater integration” for Israel in the region.

Biden himself has denied that energy security, which was earlier thought of as the primary reason for his visit to Saudi Arabia, is even on the agenda. This is despite the fact that the U.S. is facing record petrol prices as fallout from his government’s policy of strict sanctions against Russia. The high price of gas has already become a major issue before U.S. congressional elections in November.

Earlier, Biden had attempted to explore an increase in the global supply of oil while seeking some kind of reconciliation with Venezuela, and appearing to expedite the resumption of the nuclear deal with Iran. Biden also attempted to ask Saudi Arabia to increase oil production. However, most of these attempts have failed, and as per the reports, crown prince Mohammed Bin Salman even refused to attend a call by Biden in this regard in March.