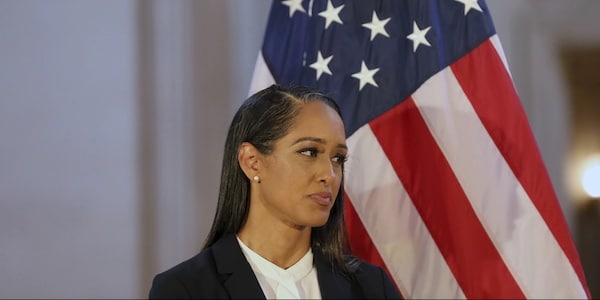 A week after she was sworn in as San Francisco’s interim district attorney, Brooke Jenkins fired 15 people, many of them hired by her predecessor, Chesa Boudin. Jenkins quit her job in the DA’s office in 2021 to become the liberal face of the recall movement that ousted Boudin.

When critics pointed out that the campaign was spearheaded by Republican millionaires and billionaires, Jenkins stood out as a self-professed progressive, and a woman of color, who claimed that Boudin had gone too far: coddling criminals, failing victims, and mismanaging the DA’s office.

But staffers in the DA’s office who spoke to The Intercept last week were not quite as pleased by Jenkins’s appointment. They suspected that Jenkins was picked because of her loyalty to Mayor London Breed. A representative from the mayor’s office sat in on Jenkins’s first meeting with the team, raising concerns that the representative was looking to gauge who among them would hew to Jenkins’s–and by extension Breed’s–agenda.

And that agenda, they emphasized, is a return to the 1990s-era war on drugs. Jenkins herself said she would take a harder approach to prosecuting drug crimes in a New York Times interview soon after her nomination. “No longer can we accept open-air drug markets as simply being a part of big-city life and life in San Francisco,” she said.

We need to have accountability for those who choose to continuously sell extremely dangerous and deadly drugs like fentanyl.

The four staffers who spoke to The Intercept were alarmed by Jenkins’s pivot to prioritizing drug crimes, including reviewing cases that were in the process of being pled out. They also worried about the return of gang enhancements and prosecuting teenagers as adults–harsh measures that Boudin worked to eliminate.

On Friday, three of those interviewed–all of whom had been hired by Boudin–were fired by Jenkins. Rachel Marshall, who was among those terminated, said Jenkins had assured them that she would make individual assessments and refrain from any sweeping cuts of staff members hired by Boudin. But during her first one-on-one meeting with Jenkins, Marshall said the new DA seemed to read off a script, concluding,

Your services are no longer needed.

“I came to DA Boudin’s office to fight for criminal justice reform; that battle has never been more urgent,” Marshall told The Intercept.

There is no question that DA Jenkins’s approach differs dramatically from my values.

Another prosecutor who was fired, who requested anonymity for fear of professional repercussions, expressed doubt that a crackdown on the city’s illicit drug markets would do anything to stem the flow of dangerous drugs. “It’ll become an overtime mill for undercover police officers,” they said.

It will jam up the courts and stand in the way of prosecuting much more serious cases. What happens to victims of violent crime? It’s depressing.

Kate Chatfield, who was also terminated on Friday, expressed concern that a close relationship between the DA and the mayor would constitute a serious conflict of interest should the mayor’s office be the subject of a DA probe. “Independence in the DA’s office is paramount,” Chatfield said.

Had Trump sent someone into a senior staff meeting at the Department of Justice during investigations into his actions, we would be outraged. And we were. Now we have that in SF.

One staffer, who requested anonymity because they are still employed by the DA’s office, described Breed’s appointment of Jenkins as a political play to appease business interests and police unions, who blamed Boudin’s reforms for street crime. Breed’s campaign was heavily funded by the tech and real estate sectors.

“I really think that’s her constituency and that’s who she’s installing to serve that constituency,” the staffer said.

The mayor is under a lot of pressure.

One of Jenkins’s first moves as DA was to back Breed’s plan to overhaul the city’s surveillance system. Currently, police are only allowed to access surveillance footage in crimes that result in serious physical injury. Breed wants to expand that to include shoplifting, “looting,” and dealing drugs.

The mayor’s office told The Intercept that it is merely providing transitional support to Jenkins. A mayor’s representative praised Jenkins’s experience, with an apparent dig at Boudin. “It’s important to note that the new district attorney is an experienced prosecutor, unlike previous occupants of the office, and has worked to try cases in the San Francisco District Attorney’s Office, including on hate crimes, sexual assault, and homicide.” Jenkins served as an assistant district attorney in San Francisco for seven years; like Boudin, she is assuming the role of DA without prior management experience.

Jenkins did not respond to The Intercept’s requests for comment.

As the national and local mood shifted away from defund, Breed pivoted sharply to a “tough-on-crime” posture. As Bloomberg reported, spending on police shot up in the city. In December 2021, Breed railed against “the reign of criminals who are destroying our city.” She promised to be “less tolerant” of “bullshit.” She called for a more aggressive law enforcement response, promising to direct emergency funds to cover police overtime, and declared a state of emergency in the Tenderloin district, where many unhoused people who use drugs congregate.

As the recall campaign against Boudin gained steam, Breed strongly hinted that she supported the effort. “I am not necessarily on the same page with a number of things that he’s doing,” she said, but she asserted that she didn’t want a “public fight in the press over personality conflicts or over things that are more complicated than just a sound bite for a news show.” As Eric Ting reported in SFGate, she then did just that. “We need to start concentrating more on supporting the victims of this city than we are supporting in some cases, sadly, the criminals,” she said, echoing a main talking point of the recall.

The recall campaign promoted stories like the lawsuit of Anh Lê, a 69-year-old Vietnamese American man who claimed that he’d been beaten with a baseball bat and sued Boudin’s office for letting his attackers off with a misdemeanor. In fact, the case had been litigated by Boudin’s predecessor, Suzy Loftus, who declined to press hate crime charges. The alleged assailants, an 11-year-old boy with a plastic bat and his father, who uses a wheelchair, got in an altercation with Lê after he yelled at the kid for riding his bike on the sidewalk. The recall effort also weaponized claims by retailers like Walgreens that shoplifting forced them to close locations; the closures were more likely due to oversaturation and fewer customers during the pandemic.

But the narrative that Boudin was soft on crime–and that it made San Francisco a locus of danger and disorder–stuck, even though violent crime went down overall during his tenure. Elsewhere in the country, including neighboring cities with tough-on-crime prosecutors like Anne-Marie Schubert in Sacramento, violent crime spiked–yet Schubert, despite running for attorney general, received little beyond local coverage. Once the national media glommed on to the recall as a bellwether for public appetite for serious reform, there was little Boudin’s office could do to combat the narrative.

Jenkins was instrumental in making the recall into a national story. “He’s trying to couch lawlessness as reform,” she said of Boudin in an appearance on “Real Time with Bill Maher” in February.

We are watching as lives are being lost and continue to remain in danger by his radical policies.

Kimberly Lutes-Koths, who worked as a prosecutor in the DA’s office between April 2021 and May of this year, said Jenkins mischaracterized the impact of Boudin’s reforms and the dynamics of the DA’s office. “She took on an agenda on the recall based on misinformation … presenting complex issues in the most simplistic and negative way possible,” Lutes-Koths said.

What she was putting out in the media was total nonsense.

Writing in The Atlantic, Annie Lowrey undercut Boudin’s claim that the recall was fueled by conservative donors by citing Jenkins. “There’s plenty of big money in the recall race, to be sure, and some of that money is Republican,” Lowrey wrote. “But a large share of San Franciscans have expressed their dissatisfaction with the district attorney and their concerns about public safety. Many are liberals, and a lot of them are progressives.” The most compelling voice challenging Boudin, Lowrey wrote,

is Brooke Jenkins, a progressive prosecutor herself.

Jenkins’s exit from the DA’s office last year, however, is hard to square with the progressive label.

ON APRIL 12, 2020 , Daniel Gudino beat his mother, 56-year-old Beatriz Gudino, to death with a bat. He then mutilated her body with a drill and set her corpse on fire. “What did I do to my fucking mom?” he reportedly said when police arrived at the scene.

Daniel Gudino told authorities that he thought his mother was a clone. The jury, which found him guilty, deadlocked 7-5 on whether he was legally insane, with the majority voting insanity. Gudino’s relatives–the family of both the victim and the perpetrator–were in the courtroom every day, recalled Ilona Solomon, the public defender on the case. They supported an insanity plea for Gudino, which would allow him to go to a psychiatric hospital. But Jenkins, who was the lead prosecutor on the case, pushed for prison time instead. Ultimately, Boudin overruled Jenkins and accepted the insanity plea.

Solomon told The Intercept that in her view, the case was clear-cut. “He had no criminal record, no history of violence,” she said. “The whole act was because of his mental illness. It’s textbook.” Jenkins accused Boudin of stripping prosecutors of discretion, which she said she plans to bring back. But Solomon thought that Jenkins wielded too much discretion in fighting the insanity plea against the family’s wishes and the recommendations of court-appointed experts. “It’s egregious,” Solomon said.

When Boudin accepted the plea, Jenkins quit in protest and aired her frustration in an interview with columnist Heather Knight. “The DA’s office now is a sinking ship,” Jenkins said.

It’s like the Titanic, and it’s taking public safety along with it.

But it’s hard to see how the insanity plea would undermine public safety. Gudino is now in a psychiatric hospital, where Solomon believes he’ll likely spend the rest of his life. “She had a temper tantrum and refused to go back to court,” Chatfield, one of the staffers who has since been fired, said of Jenkins’s exit.

Jenkins will now oversee an office whose work she spent six months trashing. Although Boudin was the public target, the recall took a broader toll. “It was hard to focus on work, there were so many distractions with the recall,” another former staffer said. They bitterly noted the irony of the effort.

There is no statistic you can point to that we made San Francisco less safe.