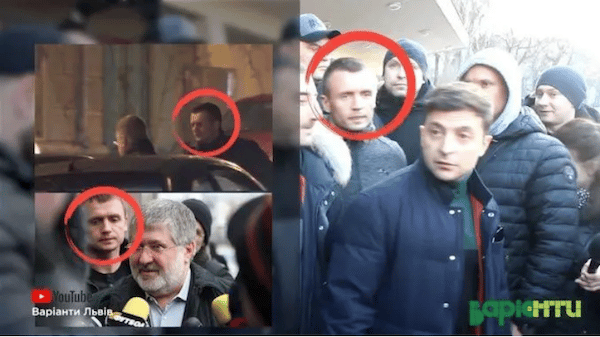 In 2019, the CIA-run Radio Free Europe reported on Ukrainian President Volodymyr Zelensky’s connection to Ihor Kholomoisky, a Ukrainian oligarch whom the State Department banned from entering the U.S. in March 2021 due to his “significant corruption.” See video report below.

This report is ironic given that, since Ukraine’s war with Russia began over four months ago, Radio Free Europe along with the rest of the Western media has depicted Zelensky as something equivalent to a reincarnation of Winston Churchill and Mother Teresa, driving a campaign for his nomination for the Nobel Peace Prize and inspiring a flamboyant musical tribute during the 2022 Grammy awards.

Steering One of the Biggest Ponzi Schemes in World History

Meanwhile in January 2022, the U.S. Department of Justice filed a civil forfeiture complaint—the fourth against him—which alleges that Kholomoisky and Gennadiy Bogolyubov, who owned PrivatBank, one of the largest banks in Ukraine, embezzled and defrauded the bank of $5.5 billion which went missing. 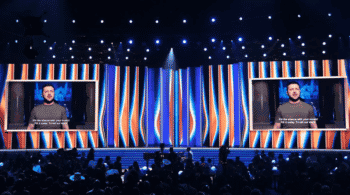 Zelensky gives a video address at the 2022 Grammy awards in April. [Source: jta.org]

The two allegedly obtained fraudulent loans and lines of credit from 2008 through 2016 and laundered portions of their criminal proceeds using an array of shell companies’ bank accounts, primarily at PrivatBank’s Cyprus branch, before they transferred the funds to the U.S. where they continued to launder them illegally through an associate operating out of offices in Miami.

Some of the stolen money was from IMF loans granted to the Ukrainian government after the 2014 Maidan coup, which was paid out by the National Bank of Ukraine into Privatbank.[1]

According to a profile in The American Spectator, Kholomoisky laundered millions in Cleveland, Ohio, and across the Midwest where, as “one of the [region’s] biggest real-estate landlords,” he “steered one of the biggest Ponzi schemes in world history.”

Making Even Other Oligarchs, No Strangers to Violent Crime, Blanch 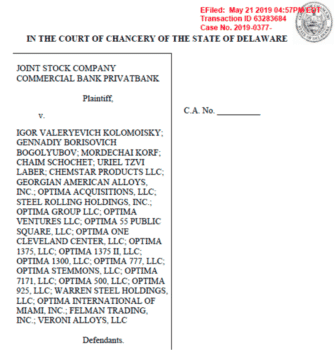 Born in Soviet Ukraine in 1963, Kholomoisky was among those to benefit after the Soviet collapse in the early 1990s from the sale of formerly state-owned enterprises like steel plants and gas wells at fire-sale prices.

According to The American Spectator, Kholomoisky had two advantages over other nascent oligarchs. First, he had a background in metallurgy—in the science of making and molding metals and alloys in demand. Second, Kholomoisky “displayed a ruthlessness that made even other oligarchs, no strangers to violent crime, blanch.”

A writer for Forbes magazine reported that, in one instance, he saw “hundreds of hired rowdies armed with baseball bats, iron bars, gas and rubber-bullet pistols and chainsaws forcibly [take] over” a steel plant that Kholomoisky eyed.

For the full Bond-villain effect, Kholomoisky put a shark tank in his office. Allegedly, he was not averse to shoving the head of a visitor in it as a reminder never to cross him. 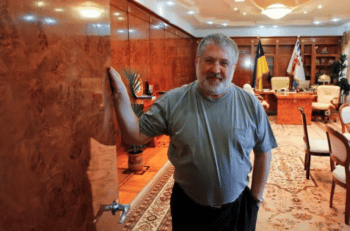 Putting on a friendly face: Kholomoisky posing for a photo in 2014. [Source: nypost.com]

According to Oleg Noginsky, the president of the Suppliers Customs Union, after Ukraine’s February 2014 Euro-Maidan Revolution, Kholomoisky “hired the guys who carried out the Odessa massacre”— the killing of several dozen supporters of deposed Russian-allied President Viktor Yanukovych who were holed up in a trade union building.

As Governor of Dnipropetrovsk Oblast from 2014 until 2016, Kholomoisky bankrolled anti-Russian units operating with the Ukrainian army in Donetsk and Luhansk—which voted to secede after the post-Maidan government tried to impose the Ukrainian language on them.

These units included the neo-Nazi Azov Battalion which terrorized the people of eastern Ukraine, along with the Dnipro and Aidar battalions, which were sometimes deployed as personal thug squads to protect Kholomoisky’s financial interests.

Burisma and the CIA

The New York Post reported that Kholomoisky had a “controlling interest” in Burisma Holdings—the Ukrainian energy company which employed Hunter Biden as a board member for $50,000 per month. Russian media, quoted in State Department emails, referred to Burisma as “part of Kholomoisky’s financial empire.” 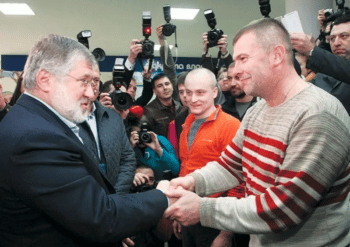 Six months after Hunter Biden departed, Burisma appointed Cofer Black to its board—a position that he maintains. Black was a career CIA officer who served as director of the CIA’s Counterterrorism Center following the September 11 attacks.

This appointment raises questions as to whether Burisma served as a CIA-front operation that was designed to help finance the anti-Russia militias in eastern Ukraine.

Ihor and Volodymyr Sitting in a Tree…

Kholomoisky’s relationship with Zelensky goes back to around 2012, when Zelensky and his partners in a television production company, Kvartal 95, began making regular content for TV stations owned by Kholomoisky.

A comedian and actor who had been famous since the 2000s, Zelensky began his political rise a few years after taking on a starring role in the political satire “Servant of the People,” which began airing on Kholomoisky’s network in 2015.

The show starred Zelensky as a humble history teacher whose anti-corruption rant in class is filmed by a student, goes viral online, and wins him national office.

In a case of life imitating art, Zelensky ended up winning the real-world Ukrainian presidency just three-and-a-half years after the show’s launch, with more than 73% of the vote. 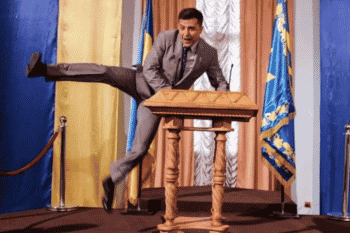 Zelensky on “Servant of the People.” [Source: slate.com]

Zelensky capitalized on widespread public anger at corruption, but his 2019 campaign was dogged by doubts over his anti-graft bona fides given his connection to Kholomoisky.

In the heat of the campaign, an ally of incumbent Petro Poroshenko, Volodymyr Ariev, published a chart on Facebook purporting to show that Zelensky and his television production partners were beneficiaries of a web of offshore firms, which they had set up beginning in 2012, that allegedly received $41 million in funds from Kholomoisky’s Privatbank.

Ariev did not provide smoking-gun evidence, though the Pandora Papers—11.9 million leaked documents published by a consortium of investigative journalists in October 2021—show that at least some of the details in this alleged scheme correspond to reality.

In specific, the Pandora Papers reveal information on ten companies in the network that match structures detailed in Ariev’s chart, and show that Zelensky and his partners used companies based in the British Virgin Islands (BVI), Belize and Cyprus.

Forbes magazine currently places Zelensky’s net worth at between $20 and $30 million—a total he could not have earned simply as a TV performer and comedian.

Zelensky allegedly owns lavish properties in central London, Italy and Miami Beach—to which he could retire if he is forced to flee Ukraine. 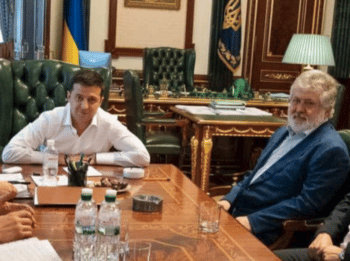 Zelensky and Kholomoisky during a meeting at Ukraine’s Presidential palace. [Source: economictimes.indiatimes.com]

Two of Zelensky’s associates in the offshore network, who were also part of his TV production company, have held powerful positions in his government. Serhiy Shefir is Zelensky’s top presidential aide, while Ivan Bakanov headed until very recently the feared Security Service of Ukraine (SBU), which is Europe’s largest security agency and nearly the same size as the FBI despite Ukraine being 16 times smaller than the U.S.

You Scratch My Back, I’ll Scratch Yours

Besides providing financial support during Ukraine’s 2019 election, Kholomoisky supplied Zelensky with a car and lent his personal lawyer to him to be campaign adviser and promoted his candidacy on various media outlets that he owned.

The close ties between the two were apparent in 2018 when Zelensky traveled to Geneva Switzerland, for Kholomoisky’s birthday, and then afterwards back to Geneva another ten times.

When Kholomoisky moved to Tel Aviv, Israel, Zelensky traveled there to visit with him three times, according to Radio Free Europe.

Zelensky claimed that his relationship with Kholomoisky was not political; rather he had gone to visit him because of TV work.

However, Zelensky made sure to reward him when he became president. He removed Kholomoisky’s opponents, the Prosecutor General, the Governor of the National Bank of Ukraine, and his own prime minister, who tried to regulate Kholomoisky’s control of a state-owned electricity company.

Ukraine’s parliament also passed a measure that prevented Kholomoisky from having to pay higher taxes on his mining operations.

No Lion of a Leader 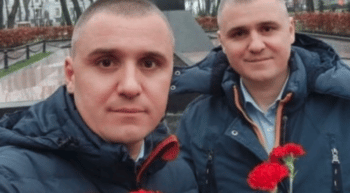 The Kononovich brothers, leaders of the Young Communist League in Ukraine, who have been detained since March 6. [Source: towardfreedom.org]

Zelensky’s long-standing ties to Kholomoisky belie the pristine public image of a man hailed by U.S. politicians as a “lion of a leader” (August Pfluger R-TX) and person of “incredible bravery” (Adam Schiff, D-CA).

A neoliberal who advanced a sweeping privatization initiative, Zelensky has banned eleven opposition parties and carried out a reign of terror against political opponents.

The victims include the former leader of the Ukrainian left forces, Vasily Volga, and the Kononovich brothers, leaders of Ukraine’s Young Communist League who were accused of being pro-Russian.

Despite campaigning on a peace platform, Zelensky provoked war with Russia by a) enacting a major troop buildup in eastern Ukraine in February; b) increasing shelling of eastern Ukraine in violation of ceasefire agreements; and c) calling for the retaking from Russia of Crimea and city of Sevastopol, which houses the Russian Navy’s Black Sea fleet.

Since the fighting began, Zelensky has eschewed negotiations and instead begged the West for more and more weapons while inviting foreign mercenaries into Ukraine.

Swiss journalist Guy Mettan has written that Zelensky will ultimately be held responsible for Ukraine’s devastation in the war as he “preferred the ruin of his country to a timely compromise.”

This assessment is at odds with the current media hagiography of Zelensky, which also obscures his ties to Kholomoisky that the CIA itself has acknowledged.

Journalist John Helmer points out that Hillary Clinton, Victoria Nuland and Christine LaGarde, the former IMF directors, ignored the evidence of Kholomoisky’s corruption and the squandering of IMF loan money in a ponzi scheme; probably because of the political imperative underlying the IMF’s policy towards Ukraine after the Maidan coup. John Helmer, “The Kolomoisky Pyramid Started with Hillary Clinton and Victoria Nuland of the State Department Plus Christine Lagarde of the IMF,” http://johnhelmer.org/the-kolomoisky-pyramid-started-with-hillary-clinton-and-victoria-nuland-of-the-state-department-plus-christine-lagarde-of-the-imf/