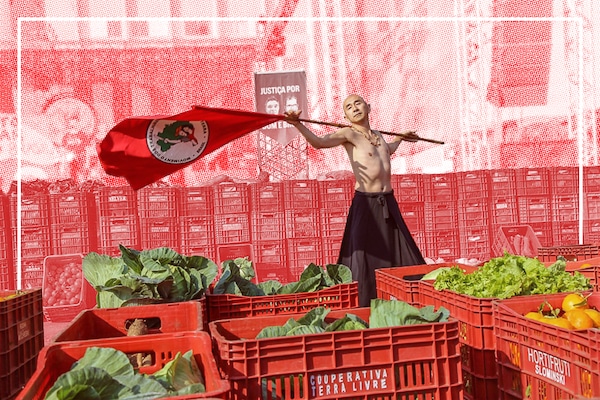 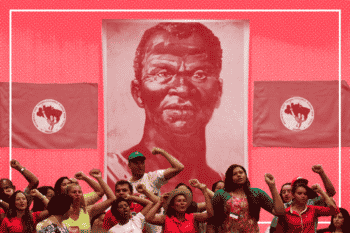 In the chilly Brazilian winter of 2019, Renata Porto Bugni (deputy director of Tricontinental: Institute for Social Research), André Cardoso (coordinator of our office in Brazil), and I went to the Lula Livre (‘Free Lula’) camp in Curitiba, set up just across the road from the penitentiary where former President Luiz Inácio Lula da Silva sat in a 15-square metre cell. Lula had been in prison for 500 days. Hundreds of people gathered each day at the Lula Livre camp to wish him good morning, good day, and good night–a greeting that sought both to keep his spirits up and to offer a spirited protest of his incarceration. Eighty days later, Lula walked out of prison, free from charges that most observers rightly condemned as absurd. He is now the front-runner in the country’s presidential elections that will take place on 2 October 2022.

One of the features of the vigil outside the federal prison was the ubiquity of militants of the Landless Workers’ Movement (MST). Their flags were everywhere, their cadre forming the spinal cord of the movement to free Lula that blossomed out from Curitiba to every corner of the country. Formed in 1984 during the military dictatorship (1964–85), the MST grew out of agricultural workers’ and peasants’ occupations of latifúndios, gigantic estates held by wealthy individuals and corporations. Over the past four decades, these farmers have taken control of millions of hectares of land across Brazil, forming the largest social movement in Latin America. 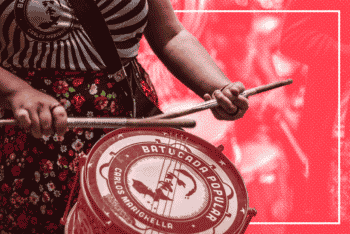 Approximately 500,000 households live in these MST-led occupations, meaning that the MST has organised about two million people into its ranks. Around 100,000 families live on encampments (acampamentos), which are occupations of fallow land to which they have not been given formal access; 400,000 families live on settlements (assentamentos), whose land they now hold by right through liberal provisions in Chapter III of the country’s 1988 Constitution, Article 184, which states that the government can ‘expropriate, on account of social interest, for purposes of agrarian reform, rural property that does not perform a social function’. However, it is important to note that, on a punctual basis, the Brazilian state nonetheless attempts to evict families from these legal encampments.

The settlements’ residents organise themselves through various democratic structures, create schools for their children and community kitchens for the indigent, and develop techniques for agroecological farming towards fulfilling their own needs and for sale in the marketplace. The MST is now rooted in the social landscape of Brazil; it is impossible to think of the country without the movement’s red flag fluttering across these encampments from the Amazon in the north to Arroio Chuí, Brazil’s southernmost point.

Beneath the considerable activity of the MST lies a theory, and that theory–rooted in concepts such as agrarian reform–is detailed in a variety of venues. Our institute’s deputy director, Renata Porto Bugni, interviewed one of the members of the MST’s national coordination, Neuri Rossetto, on his understanding of the movement’s theory and the relevance of the Italian communist Antonio Gramsci’s writing. Published jointly with GramsciLab and Centro per la Riforma dello Stato, this interview is now available in our dossier no. 54 (July 2022), Gramsci Amidst Brazil’s Landless Workers’ Movement (MST). Neuri, as he prefers to be called, shares his understanding of Gramsci and reflects on the three main challenges faced by the MST: 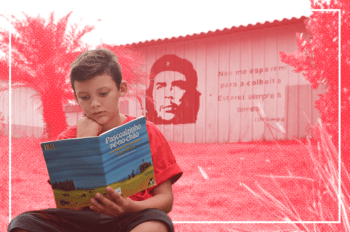 Hegemony, as Gramsci pointed out, emerges from the practice of assembling a new political project out of the ‘common sense’ of the people and elaborating those ideas into a coherent philosophy. The central concept for the MST to elaborate this theory is agrarian reform. According to Neuri, this reform project fights ‘for an agricultural model centred on the production of healthy food for the Brazilian population alongside the struggle to democratise land ownership’. The MST organises peasants to improve not only their control over land, but also over agricultural production, including by avoiding toxic chemicals which destroy both the workers’ land and health. This project is now linked to an interest amongst consumers for food whose components do not harm them and whose production does not destroy the planet. The possibility of uniting the majority of the country’s 212 million people in pursuit of agrarian reform galvanises the MST.

Is the MST a social movement or a political party? This has been a question that has bedevilled the movement since its origin nearly forty years ago. In fact, from a Gramscian perspective, the distinction between these two–social movements and political parties–is not so significant. Neuri’s commentary on these themes in the interview is quite instructive:

We are aware of the responsibilities and the need to improve our political forces, both in their organisational and ideological senses, in order to have a greater influence in the class struggle. However, we do not claim to assume the role of a political party in its strict sense, as we believe that this political instrument is beyond our scope. This does not mean to say that we have a supra-partisan or non-partisan stance. We believe that the articulation of working-class movements, trade unions, and political parties is fundamental in the construction of another sociability which is alternative and contrary to the bourgeois order. … [W]e do not underestimate the importance and strength of political action and popular mobilisations as an educating element for the subaltern classes. The popular masses learn and educate themselves in popular mobilisations. There, in the mass movement, lies the political strength of the organisation; this is where the political-ideological level of the masses is raised.

In sum, the MST is part of a process to build the organisational and ideological strength of the peasantry, and it works alongside trade union movements and other organisations to create a political project for social emancipation. To that end, the MST has participated in building the Popular Project for Brazil (Projeto Brasil Popular), which, as Neuri says, ‘aims to consolidate a historic bloc that promotes anti-capitalist, emancipatory struggles and immediate economic gains that meet the needs and interests of the working class’. Advancing the confidence and power of the working class and peasantry is, therefore, central to the MST’s activity. Part of this work has been to fight back against Lula’s persecution.

In 1962–63, while Brazil was governed by a centre-left formation led by President João Goulart, the mood in the country was drawn to change and possibility. During this period, the Amazonian poet Thiago de Mello (1926–2022) wrote ‘Madrugada camponesa’ (‘Peasant Dawn’), which reflected on the peasantry’s hard work to plant not only food but also hope. When the poem was published in 1965 in a book called Faz escuro mas eu canto (‘It Is Dark but I Sing’), the political situation in Brazil had changed after a U.S.-led coup overthrew Goulart and brought the military to power in 1964. The poem’s line ‘It is dark, but I sing because the morning will come’ took on a new charge. The next year, Nara Leão sang these words and made them an anthem of the time. We leave our newsletter this week with de Mello’s poem, a tribute to the peasantry and to the fight against the dictatorship of power, privilege, and property.

The land is still dark
in the peasant dawn,
but it is necessary to plant.
Night was deeper,
now morning is coming.

Soon it will be (I feel it in the air)
the time of ripe wheat.
It will be time to harvest.
Miracles are rising up like
blue rain on the cornfields,
beanstalks bursting into flower,
fresh sap flowing
from my distant rubber trees.

Dawn of hope,
the time of love is almost here.
I harvest a fiery sun that burns on the ground
and plough the light from within the sugarcane,
my soul on its pennant.