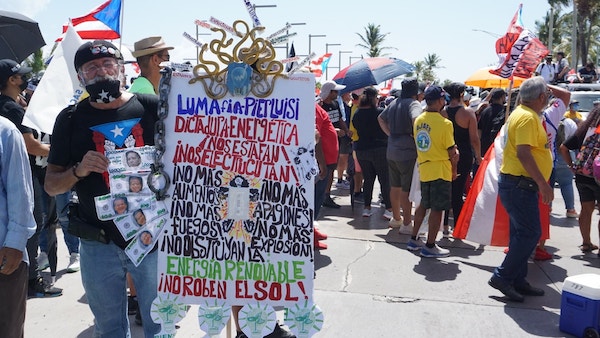 Thousands of Puerto Ricans took to the streets of the capital San Juan against worsening of electricity services and rise in power rates on July 20. (Photo: Bandera Roja/Facebook)

Workers from across diverse sectors, members of various social organizations, and legislators of left-wing opposition Puerto Rican Independence Party marched from the Capitol, the legislative assembly, to the La Fortaleza, the governor’s office, demanding that the government terminate the contract signed between the state Electric Power Authority (PREPA) and the Canadian-American energy company LUMA.

The protesters condemned that since LUMA began operating Puerto Rico’s electricity transmission and distribution system on June 1, 2020, the electricity services have worsened and outages have increased due to lack of maintenance, while power rates have steadily gone up. They stated that the people cannot afford one more increase, referring to the past seven consecutive quarterly increases in power rates. The last rate hike, which came into effect on July 1, pushed rates up by 17.1%.

The demonstrators also criticized Governor Pierluisi for vetoing House Bill 1,383, which prevented increases in the electricity bill by cutting 75% of the unsecured debt of the PREPA. The bill established a fixed rate of no more than 20 cents per kilowatt hour, among other conditions for the restructuring of the debt with the bondholders, amounting to USD 9 billion.

In this regard, Johnny Rodríguez Ortiz, president of the PREPA Retirees Association, said that they urge the legislators to go against the governor’s veto and approve the bill. “No one can handle seven raises… It’s an assault on the pocketbook. We’re tired of it,” he declared.

Meanwhile, Eva Prados, spokesperson for the Citizen Front for the Audit of the Debt, decried that “we have been fighting abuse and looting for more than five years with a debt that has not been audited,” adding that “the Fiscal Supervision Board (JSF) is now cooking a new plan so that we, the citizens, are the ones who pay the debt out of our pockets.”

Ángel Figueroa Jaramillo, president of the Union of Electricity and Irrigation Workers (UTIER), lamented that “it is very unfortunate that the governor continues to defend a contract, despite the fact that his constitutional duty is to defend the people over a contractor.”